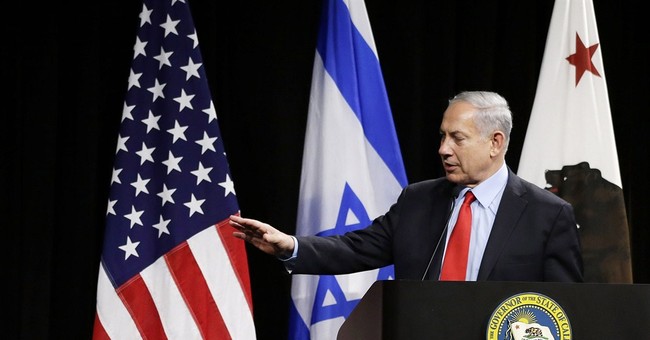 It was not just Prime Minister Netanyahu who was cheered this week; moral clarity was applauded.

Americans are tired of the aggression of the Iranian dictatorship. The Iranian dictatorship is like a domestic abuser; dressed up as a government. It picks on people whom they think will not fight back. Such a regime only responds to the toughest of legal measures short of war, sadly if at all.

The craziest of Israeli detractors will throw out any argument they can against Israel, aggressively clawing upward while sinking in the quicksand of their fallacious arguments; arguments that the Prime Minister dispelled.

The same is true for America. The detractors and those who hate America say that America has a foreign policy based on oil, not principle, yet fail to point out that if American foreign policy was based on oil, then America would never support Israel. Other arguments are held about America’s relationship with Israel. The detractors and haters will do anything even if contradictory and self-defeating. Such is the hatred that some outsiders have for America and the false superiority of self guilt held by a few radicals in America.

After years of hearing apologies for what America is, and not hearing enough about the decency and goodness of America, Americans are tired of this so called change and want real change; change to the days of moral clarity.

Americans are smart enough to know there are gray areas in life, for even the Sacred Scriptures spells out a few such situations. Yet there are also definite moral absolutes regarding good and evil, even and often amongst nations.

There are good, decent nations and America is one of them.

It is the Americans who give their time, talent, treasure and lives to teach English, help others after a natural disaster, or stop an oppressor in war. Some Americans, such as those in the military, do all three.

The naysayers will nitpick at minor points because they have no larger argument to standpoint Israel and the United States. The Iranian government is evil and wants to destroy the tiny nation of Israel. The Iranian dictatorship funds international terrorism and has been non-compliant with the United Nations and also the P5 Plus One.

Netanyahu’s speech to the American Congress, and the world, regarding Iran returned many to these simple, tough, but unalterable facts. It was also speech that looked to how special America is. Netanyahu graciously and properly praised the times the administration has stood in solidarity with Israel. The Prime Minister warned us about the threat of Iran and he also reminded us of something greater; a Churchillian message regarding the goodness of America and the forever freedoms given to man by God.

British Prime Minister Winston Churchill was half American and was known for soaring, yet prophetic, rhetoric when it came to the primary evil of the world before World War II; an evil whose ultimate professed goal was destroying world Jewry.

The same recycled evil is alive today and perhaps it is not surprising that a man like Netanyahu would bring the necessary clarity regarding this evil. Netanyahu graduated high school and attended college in the United States. Like Churchill he served in the military and, as a leader, knows what it is like to have a nation surrounded by enemies, fighting almost alone, and looking to America. The man from across the seas knows America and knows freedom. He knows firsthand that America is far from a great Satan but a great light unto the world.

As many Americans have been subjected to a large amount of propaganda as to supposed evil nature of this country and its people, even going to far as to equate our problems with the unabashed evils of our enemies, sometimes it takes someone from another nation to make people realize, and be proud of the realization, that America is special.

This week, in the house of the people, light was shined on the Iranian dictatorship. The same light also cut straight through the desert that is moral relativism. Now we must fortify our larger home nation, consolidate our family of allied nations, while defending us, and them when necessary. Doing this we will live, and lead, in such a way that worried others know their best bet is being with us and that America will always have their back. It is time to lead and continue marching home, through the barren desert, to the promised land of truth.