The Atomic Bomb: It Was Always Right 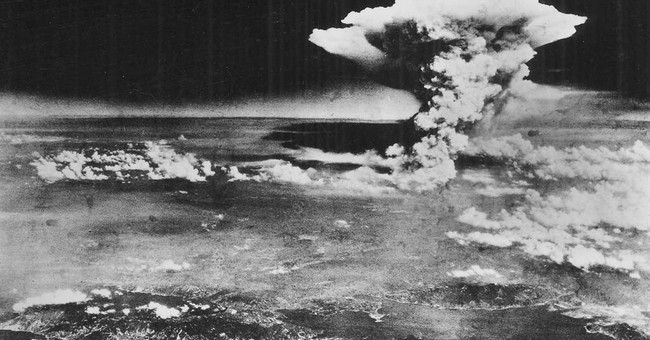 This week Major Theodore Van Kirk, the last surviving Veteran of the Enola Gay that dropped the first atomic bomb on Japan, joined the rest of his comrades. His passing is a reminder of why using the atomic bomb was the right thing.

In August 1945 the Allied Powers, led by the United States, were at war with Imperial Japan in the latter days of World War II. Japan would not give up. For every ten thousand Japanese soldiers that were killed by the Allies only a minuscule amount gave up; usually in the single digits.

It was during the war that the United States began to develop an atomic bomb, largely in response to the urging of Albert Einstein who warned President Roosevelt, in 1939, about Germany’s attempts to make an atomic weapon.

Japan was a tough enemy. Surrender was seen as more than even disgrace; it was a dishonor to the Japanese Emperor, who was the Japanese God. The Japanese were allies of the Nazis. Comparing the two, the Nazis were evil but also methodical. The Nazis were fanatical about only one thing; the elimination of the Jews, a practice they kept up to the literal ending of the war in Europe in May of 1945. The Germans were a tough enemy but they were, by World War II standards, in their military operations, somewhat practical especially when Hitler was ignored. Germans did surrender by the hundreds of thousands years before the war ended. This was not the case of Imperial Japan and in fact Japanese non surrender got worse the closer we got to the shores of Japan. The Japanese soldier was fighting not just for their buddy, their family, or their homeland; they were fighting for their God.

The United States was inching closer to Japan in early and mid-1945. The island campaigns of Okinawa and Iwo Jima, the latter an island of mere miles, resulted in tens of thousands of casualties. The Japanese began going beyond even fanatical resistance to suicidal resistance by crashing their planes into American ships. Even then there was no hope for Japan. American submarines had nearly run out of targets, having surrounded Japan, and were reduced to shelling fishing boats and even targets on land. American planes were firebombing Japanese cities into oblivion. Japan was alone and starvation was a realistic possibility but they would not give up. Japan would have to be invaded.

Unlike D Day, the topographic composition of Japan made the landing locations obvious. Japan knew where we were going to land and they were ready for this last stand. Even children were taught in the ways of the sword and the spear so they could kill at least one American before they too would die for their Emperor. This happened with Japanese children in Hiroshima, Nagasaki, and throughout Japan.

To save American and Japanese lives and end the war, President Truman ordered the first atomic bomb dropped on Hiroshima on August 6, 1945. Tens of thousands were instantly killed by the bomb dropped from the Enola Gay, the plane navigated by Maj. Van Kirk. The Japanese still did not surrender. Their military council was divided on surrendering. Three days later another bomb was dropped on Nagasaki also killing tens of thousands. More would die of radiation poisoning in years ahead.

The war council still was divided on surrendering but some Japanese officers looked to end the war and asked the Emperor to use his divine authority to stop the killing. The Soviet Union had entered the war against Japan, American planes were destroying what little was left of other Japanese cities, and an American POW told his captors that the next atomic bomb would be dropped on Tokyo.

It took the personal intervention of the Emperor to end the war. Even after their God had intervened and said to the Army that the war must end, some Japanese were not ready to give up. A group of Army officers launched a failed coup against the Emperor, ostensibly to save their God from shame. After the coup failed the Emperor spoke on radio to tell his people to surrender. It was the first time the Japanese people had ever heard his voice. Many of the Japanese soldiers who did not get the word from the Emperor continued to fight in isolated Pacific pockets until the mid-1970’s, almost 30 years after the end of the war.

The leftists are fools when it comes to the atomic bomb debate. They argue that the bomb was dropped because of Soviet entry into the war on Japan on August 9, the day Nagasaki was bombed. What the leftists conveniently leave out is that the bomb was shipped to the Pacific before the Soviet Union entered the war against Japan and that the United States asked the Soviet Union to enter the war against Japan.

Finally, leftists say how could you kill so many people? This is a typical argument from those who have never had to make such a decision as Truman did or other decisions of life and death. Truman was faced with kill now and hopefully end the war or have even more killed on both sides by not using the bomb. (Leftists apparently forget that even their beloved Soviet Union entered the war against Japan. Soviet lives were saved too by Truman.)

This is what leftism does; it plants seeds in people leading them to believe that America is somehow responsible for all the evils in the world, even when America has achieved victory and done well. They will even do it even with World War II, which no sane person can argue with our participation in. They are shameful and are a disgrace to the generation that made it through the Depression and fought, and won, World War II.

Knowing leftist emotion, if the bomb had not been used on Japan, and millions of American casualties occurred, along with tens of millions of Japanese casualties, the leftists would say that we should have used the bomb to alleviate the suffering of the war. Such as the argument of those who were protected by the Enola Gay.

President Truman was an independent thinker and not a man to be pushed around. His desegregation of the armed forces and recognition of the new State of Israel were evidence of that. He was also a combat veteran. He knew the carnage of war and understood that hard decisions need to be made in war.

It will be interesting to see where the history books, backed by their common core allies and government employee teachers, go with teaching the atomic bomb in years ahead. Before all the Veterans of World War II had even begun to die in large numbers, the leftist jargon against usage of the bomb began. They have spared not even Truman, though Truman was a democrat, for their blind rage knows no bounds. It will get worse once all of the generation that made it through the Depression, and won the war, have passed away.

This is why we should, loudly and boldly, teach that it was right to drop the bomb and why. This is why we should honor the military service of Theodore Van Kirk and those who dropped the atomic bombs. They saved the lives of many of our readers, in America, Japan, and elsewhere.

To Major Theodore Van Kirk we say thank you. It was a tough mission, but you can rest well. You saved countless lives. Welcome home from your final mission. Your comrades are waiting.