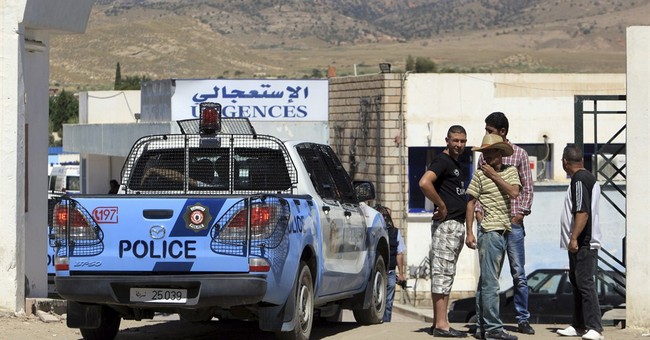 The past few weeks, from France to Gaza, have seen many Islamic attacks. A record for the deadliest attack in Tunisia was also set last week.

Tunisia, an overwhelmingly Islamic country, is in the middle of a crackdown on Islamic terrorists who feel the current, democratic, regime is too moderate. The Tunisian Army is leading the crackdown and 14 Tunisian soldiers were killed last in that country while 20 more soldiers were wounded; the worst terrorist attack ever seen on Tunisia’s army.

The attack which took place at two checkpoints near the Algerian border, was not atypical of Islamic attacks in that the attack was launched during a sacred time; Tunisian soldiers were in the midst of breaking their Ramadan fast when the attack, launched by dozens of Islamists, occurred. The terrorists were armed with machine guns, rifles, and grenade launchers. According to the Tunisian Army, nine of the 14 soldiers who died were burned to death after they were hit with an RPG. Tunisian Defense Minister Ghazi Jribi said the militants fled into Algeria after the attack.

The attack was led by an al Qaeda affiliated group, Islamic Maghreb, aka AQIM. AQIM has been designated as a terrorist organization by the U.S. government. One of AQIM’s main paths of funding is kidnapping and ransom. It is estimated that ransoms have brought in over $50,000,000 to AQIM over the last decade.

Lotfi Ben Jeddou, the Tunisian Minister of the Interior, believes the terrorists are trying to delay the upcoming October 26 Parliamentary elections. In May 2014 AQIM attacked the Interior Minister’s home, killing four policemen, and targeting the minister who was not at home. According to AQIM the Interior Minister was guilty of apostasy.

The most recent, deadliest attack of Tunisian soldiers follows a yearlong shift in strategy to AQIM publicly engaging in death jihad inside Tunisia, as opposed to previous methods. In February 2013 Chokri Belaid, a secular leader, was assassinated. Later that summer, eight Tunisian soldiers were killed by Islamic militants. Some of the eight soldiers had their throats slit. A few days after that 2013 attack Mohamed Brahmi, another socialist leader, was assassinated.

The current Tunisian government is intent on maintaining a semblance of a secular state after the previous autocratic government of Zine El Abidine Ben Ali was overthrown. The current state is far from perfect and its largest political party is socialist and has a murky relationship with radical Islam. Still, Tunisia is one of the more secular states in the Middle East and North Africa. The current party holding plurality in Tunisia is targeted by AQIM, the Islamist alternative.

In addition to attacking Tunisian soldiers, AQIM is attempting to overthrow the Algerian government as well as attack U.S. and European interests. Another Islamic terrorist group, Ansar Al Sharia in Tunisia (AST), has also been active in that country. According to www.trackingterrorism.org, AQIM absorbed the AST group in January 2014. The Washington Institute confirms that AQIM at least “has tried to insert itself into AST’s relationship with the Tunisian state.”

As recent events and a larger study of history show, the radical Islamists will stop at nothing until their caliphate is established across the Middle East, North Africa, Europe, and beyond. The current Tunisian Prime Minister, Mehdi Jomaa, said that stronger measures will be taken on Tunisia’s borders and internally against AQIM so that the group will not stop that country’s political transition.

Aside from major spiritual and cultural change, secular leaders appear to be the best hope on the immediate horizon, in the Middle East, against Islamic militants.

The battle for Tunisia will heat up as elections approach this fall.

*Opinions expressed in this article are not those of any government agency.