Larry O'Connor
|
Posted: Jun 08, 2021 1:10 PM
Share   Tweet
The opinions expressed by columnists are their own and do not necessarily represent the views of Townhall.com. 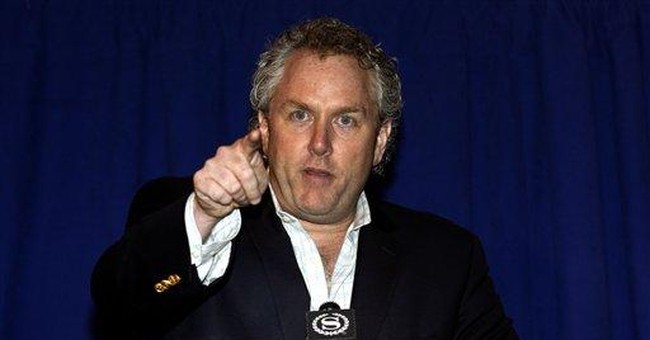 Ten years ago this week, Andrew Breitbart took the podium at Anthony Weiner's hastily arranged press conference in New York City. It was just hours after Breitbart's Big Government website (the precursor to what is now known as Breitbart News) published a series of damning selfies of the New York congressman in various states of undress.

The photos were proof that the congressman had been lying and falsely accusing Breitbart and his employees (including myself) of "hacking" his Twitter account with pornographic imagery.

The evening of Weiner's now-infamous, incriminating tweet, I was the Editor-in-Chief of Breitbart.TV, Andrew's video aggregation site. Andrew called us all for an emergency editorial conference call. I remember joining the conversation that had just begun with Andrew, Larry Solov (now CEO of the entire Breitbart News venture), John Nolte (then Editor-in-Chief of Big Hollywood), and Dana Loesch (then Editor-in-Chief of Big Journalism). Missing from the call were two of Andrew's key contributors and advisors; you may have heard of them, Ben Shapiro and Joel Pollak.

Andrew was a heck of a talent scout, wouldn't you say?

We discussed what had happened and what we, a renegade, journalistic upstart, could do with the story.

Remember, this was 2011. Twitter was in its infancy. Journalists, let alone the general public, were still getting to understand how social media worked and whether hacking was possible, rare, routine, or none of the above.

Here's how Andrew described the call in his great memoir, "Righteous Indignation":

I said that we needed to convene an editorial conference call. Tuesday was indeed coming early. And immediately available, on the shortest of notice, were Nolte, Solov, and O'Connor. (Pollak, our resident Orthodox Jew, was to miss the first rollicking twenty-four hours of Weinergate due to religious observances. We would make that up in spades, as you will see later in this chapter.)

The conference call was the first of many dramatic and emotionally excruciating moments that would occur over the next three to four weeks. The first order of business was to determine whether or not the tweet emanated from Congressman Weiner's verified Twitter account. The Twitter feed seemed to be genuine–and it contained another clue: a shout-out to Seattle earlier that evening, where the apparent intended recipient of his photograph lived. Our second concern was whether or not the image, which was connected to a yfrog account (a photo hosting service), belonged to Weiner. But while the confirmation process was taking place, at about 8 p.m. Pacific time, we watched, in real time and in great awe, as the yfrog account's photos–mostly innocuous snapshots of the congressman–were taken down. Simultaneously, the intended Twitter recipient of the image–the bulging member of Congress in grey boxer briefs–deleted not just her Twitter account but also her Facebook account.

During the call, Andrew remembered that earlier in the month, our general tip email account received a tip regarding Weiner and this sort of illicit behavior.

In fact, it was Larry Solov–a central part of Breitbart and the Bigs, but not usually an editorial force–who remembered and forwarded the tip in the midst of our conference call. I knew then that the key to the story was getting to the bottom of that tip. So I got off the conference call while it was in progress, and left a message for the person in Texas at the phone number he had provided.

During the conference call, we observed Weiner's account disappear before our eyes as well as the Twitter and Facebook page of the intended recipient of the tawdry image.

"We're watching the cover-up," Andrew said to all of us.

As usual, he was right.

"Of course, we have a story here," he said. "We have a huge story. A sitting congressman's Twitter account has been hacked with a pornographic image. It may very well be an attempt to frame him." It was either that or the Weiner was guilty of some pretty tawdry stuff, and now he was engaged in covering it up and lying about it.

Either way, to the presses!

Our conference call had been going on for hours now. Big Journalism editor Dana Loesch, who was packing her bags, started typing out the story. I offered the title, "Weinergate: Congressman Claims 'Facebook Hacked' As Lewd Photo Hits Twitter," and the first sentence: "Hacked–or Hung?" The congressman had put himself in quite a pickle.

Over the intervening years, the world has come to learn of the disgraced congressman's online proclivities with young women. His escapades eventually resulted in a stint in federal prison for sending explicit texts to a 15-year-old girl.

But at the time of the now-infamous press conference, Weiner had denied any wrongdoing and had deflected blame by accusing Andrew, his company, his writers, and even his toaster for his debased and craven behavior.

And most people in the mainstream media believed him. After all, who are you going to believe: A left-wing Democratic congressman married to Hillary Clinton's "attache" Huma Abedin, or a "right-wing blogger" like Andrew Breitbart?

Weiner was a darling of the liberal press in Manhattan and Washington. Former President Bill Clinton, of all people, performed Weiner and Abedin's wedding ceremony (insert every one of the multitudes of jokes you are thinking of here).

Breitbart was a pariah. And the mainstream media treated him as such.

The pressure on Andrew and the entire staff at his "Big" websites was enormous.

Want some delicious irony? One of the most vocal skeptics attacking Breitbart during this entire escapade was none other than CNN Legal Analyst Jeffrey Toobin.

CNN had Andrew on to discuss our story (which was really an exercise in the CNN host attacking him and our coverage of the story). Toobin was then brought on the air to analyze the legal trouble Weiner or Breitbart might be in, depending on who one believed.

"What Andrew Breitbart was insinuating about [Weiner] with young girls and stuff is outrageous. And frankly, it's too bad that he got to say that stuff on CNN," Toobin said. "Look, this is a light-hearted story. This is a silly little thing that happened; it's not a big deal."

In the end, Breitbart (the man as well as the website) was vindicated. We were right, they were wrong... no... they were lying their butts off. But right up until the moment they couldn't lie anymore, they accused us of the worst possible behavior, and most in the mainstream media believed them and condemned us.

We all loved him for that, and God, do we miss him now.

Do yourself a favor, watch the whole press conference below and let me give you one tidbit that you might relish. Right before he texted us and said he was heading over to the press conference, he said: "Don't worry. I'll keep a low profile!"