At CPAC, Trump Will Have the Last Word

Larry O'Connor
|
Posted: Feb 26, 2021 1:15 PM
Share   Tweet
The opinions expressed by columnists are their own and do not necessarily represent the views of Townhall.com. 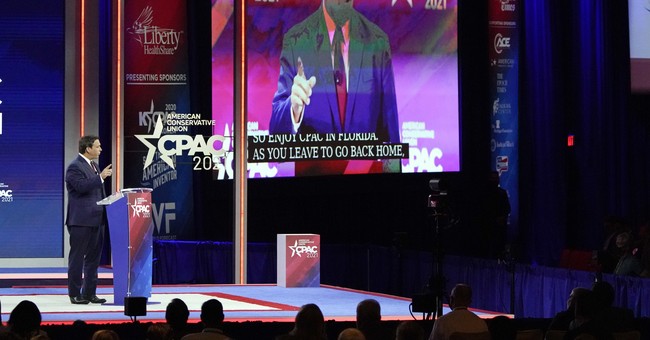 The conference is usually held in the Washington, DC, area, but COVID-19 restrictions in Maryland prohibited CPAC from going forward in its usual fashion in its home locale. No problem... Florida is free these days. So, Matt Schlapp and the team at the American Conservative Union packed their bags and rewarded Gov. Ron DeSantis with a huge influx of visitors, booked flights, occupied hotel rooms, restaurant spending and glorious free-market capitalism.

So far, things are going swell!

But, the aforementioned electricity in the air is not due to the warm climate and the euphoria over the ability to freely associate, gather and speak. No, it's because this year, CPAC will be the first proving ground for Republicans looking to position themselves as a viable candidate for 2024.

Walking through the assembled attendees, there's a very real sense of optimism and anticipation for a passionate discussion of conservative principles and policies.

They'll all make their way to the made-for-TV set in the Hyatt Regency ballroom and try to impress the conservative voters who have traveled far and wide to see what these presidential hopefuls are made of. No doubt these savvy politicians will throw plenty of red meat in the form of pointed criticism of the Biden Administration, the Pelosi agenda, AOC-Sander socialism, and Schumer cronyism.

This year we will all watch the speeches and wait to be inspired. We will all think in our minds, "Yeah, maybe this guy or gal could be the leader of the free world... sure!" Or, we'll be thinking, "Meh. I mean, I like this guy... but come on. There's no way."

But, this year, there's one huge difference. After we hear from DeSantis and Pompeo and Grenell and Noem and Cruz and Scott and Cotton and all of the other potentials... we'll hear from one more. We'll hear from Donald Trump.

So while we're watching these great politicians try to win us over, we'll know that we're still going to hear from Trump. Even though we still don't know if he plans to run.

And, here's the thing, neither do DeSantis and Pompeo and Grenell and Noem and Cruz and Scott and Cotton, et. al.

Think about that! As they stride the stage and make their case for the 2024 race, they will know that Trump will have the last word!

And what will that word be?

Will he dwell on all of the election irregularities from last year and lead the crowd in a "stop the steal" chant? Possibly. But probably not.

Will he sharply criticize Joe Biden and the executive orders that have attempted to undo so many of his achievements? You can bet your robust 401K on that one.

Will he announce his candidacy for 2024? Doubtful.

Will he rule out running for president in 2024? Even more doubtful.

In fact, the one thing I am surest of is that Donald Trump will throw out some hints that he might run... but he's just not sure.

"Should I? Would you like that? I don't know... maybe I should. What do you think?" And the CPAC crowd goes wild!

Either way, Sunday's speech will be historic, and all eyes will be on Trump with the world's media hanging on every word, which only means there will be fewer eyes on all the other potential candidates. Ah well... there's always CPAC 2022.