Larry Kudlow
|
Posted: Oct 10, 2017 12:01 AM
Share   Tweet
The opinions expressed by columnists are their own and do not necessarily represent the views of Townhall.com. 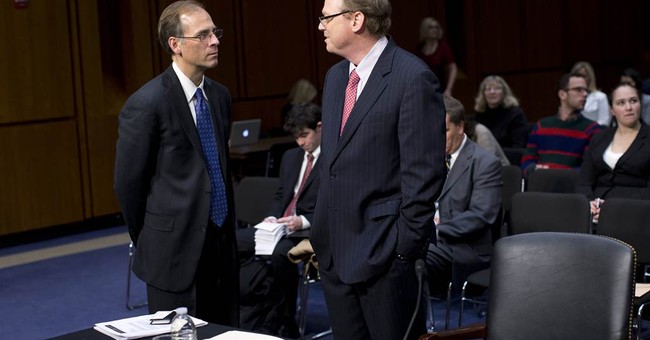 President Trump's new chair of the Council of Economic Advisers, Kevin Hassett, walked into the lion's den last week with his first official speech. He used the moment to pound the leftist Tax Policy Center. It was a wonderful sight.

When Hassett wasn't pounding the TPC, he was spanking them. He took them to the woodshed and disciplined them in public view.

Hassett rightfully accused the TPC of ignoring widely accepted economic literature, for using false assumptions on tax details that have never been published, and for manufacturing income-redistribution ("tax cuts for the rich") and deficit numbers that don't even exist.

In perhaps his toughest criticism of all, Hassett called the TPC's findings "scientifically indefensible." There's no greater insult among academics.

It's a pity that mainstream media outlets refer to the TPC as "nonpartisan." They're not. TPC staff is chock-full of former Obama economists.

But Hassett has shown no fear.

Kevin Hassett is the new face at the highest economic level of the Trump administration. But he's no neophyte. He has a Ph.D. in economics from the University of Pennsylvania. He has spent time on the staff of the Federal Reserve Board in Washington. He taught at Columbia Business School. He was a long-time economic-policy director at AEI.

And he's well-liked by everyone who knows him. Plus, he's smart. Very smart.

Not only did he chastise the TPC, but he also schooled them on a number of important tax policies that have become mainstream thinking inside the Trump White House.

"Economists who have studied the effects of taxes over time have discovered a consensus," he said. "Lower marginal tax rates and a broader base increase the rate of economic growth and well-being."

He continues: "For years, TPC analyzed tax bills without providing dynamic scoring, but now provides a dynamic score, but with zero effect."

For me, Hassett's biggest contribution to the tax debate is the notion that high corporate tax rates depress the wages of workers.

Because companies have stashed profits overseas, and because the U.S. tax cost of investment is so high, middle-income wage earners have suffered mightily. Hassett -- and his AEI colleague Aparna Mathur -- have argued for over a decade that if you want to raise wages, cut corporate tax rates.

During his TPC speech, Hassett noted that "for the median household in the U.S., the top corporate marginal rate cut from 35 percent to 20 percent would boost wage growth almost four-fold."

In his past work, Hassett has argued that 70 percent of the benefits of lower business tax rates accrue to middle-income wage earners -- in other words, Donald Trump's middle-class base.

Trump's tax cuts are not handouts to the rich, as the redistributionist Democratic left argues. Everyone benefits from these lower tax rates. As JFK put it, a rising tide lifts all boats. The growth ignited by lower tax rates solves all problems.

Class warfare has never worked in American politics. But Trump's tax plan will help middle-income wage earners the most. There's nothing wrong with that.

Backing up Hassett's assertions, former CEA chair Glenn Hubbard recently wrote in the Wall Street Journal that too many economists fail to consider the share of the U.S. corporate tax burden borne by labor -- 60 percent according to his research. Neither the TPC, the Congressional Budget Office, nor the Joint Tax Committee model these results. Instead, they ignore the evidence.

A recent analysis of the House tax plan -- which is nearly identical to the Trump plan -- by professors Alan Auerbach (University of California, Berkeley) and Laurence Kotlikoff (Boston University) concluded that it would boost wages by 8 percent. That's a big number.

I look at it this way: Trump's tax-cut and regulatory-rollback policies are aimed directly at ending the war on business, which has dragged down the economy for nearly two decades. Let's reward success rather than punish it.

In just eight months, this growth message has generated a whopping increase in business and consumer confidence. The economy is picking up steam. The stock market has been on a tear. This is not a coincidence.

If Trump continues to link large- and small-business tax cuts to the well-being of the wage-earning middle class, he'll score economic victories across the board. At the same time, America will regain the populist prosperity that's been the backbone of our democracy for nearly 250 years.

That's right. As I sometimes put it, free-market capitalism is the best path to prosperity.

It's comforting to know Kevin Hassett is burning this torch down in the swamp of Washington, D.C.