Ryan and Reconciliation Is a Powerful Combination 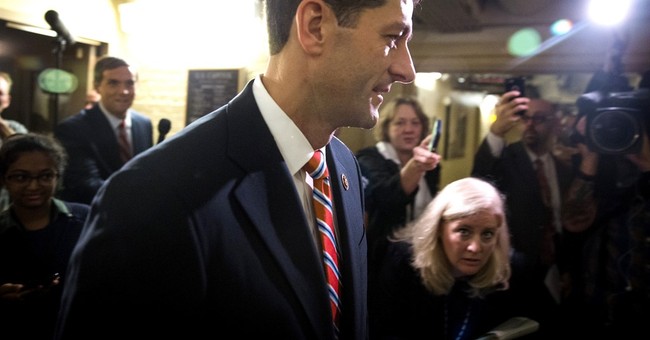 Trending
As of this writing, House Ways and Means Chairman Paul Ryan has not decided whether to run for speaker. He has been bombarded by all the Republican factions. Even Mitt Romney says the Wisconsinite can unify the Republican conference and take ON the job.

I applaud Ryan's leadership and policy skills and think he would make a good speaker.

But there's a backstory to the current chaos of the GOP conference and the withdrawal of Kevin McCarthy from the speakership race. The GOP leadership in the House and Senate has failed to pass legislation to repeal the Obama agenda and put the measures on the president's desk. If he vetoes them, so be it. We go to 2016. But it's all been broken promises.

Former Bush speechwriter Peter Robinson just reminded readers on the Ricochet website of an interview he had with Kevin McCarthy before the 2014 midterms.

Robinson: "You will pass a reform agenda, putting bill after bill on President Obama's desk?"

This failure has enraged the Republican grassroots and has sent three outsiders -- Donald Trump, Ben Carson and Carly Fiorina -- to the top of the GOP presidential field.

What have the congressional Republicans been waiting for?

Well, according to ace Washington policy analyst Dan Clifton of Strategas, the Ryan-led Ways and Means committee has been moving on three pieces of reconciliation legislation to defund Planned Parenthood and target specific pieces of Obamacare for repeal. And Clifton notes that reconciliation legislation requires just 51 votes in the Senate. Sure, Obama would veto this. But at least the GOP would signal its intentions should they win the White House in 2016.

And with Boehner on the way out, House Republicans have now developed a laundry list of reconciliation provisions to repeal the individual mandate, the employer mandate, the medical-device tax, the Cadillac tax, IPAB (Independent Payment Advisory Board) and the auto-enrollment requirement that forces small businesses to enroll full-time employees in Obamacare.

But what happened to tax reform, particularly corporate tax reform? This would be the single strongest stimulant to the economy, which is showing dangerous signs of yet another slowdown inside the already sub-par recovery.

There are three easy pieces here. First, slash the corporate tax rate to 15 percent from 40 percent and permit small business pass-through S-corps to pay the lower C-corp rate. This has been proposed by Donald Trump. Second, allow for full cash expensing of new business investment as a tax deduction. FedEx CEO Fred Smith says this by itself would generate a strong business-investment recovery. Third, pass a repatriation provision to bring back the roughly $2 trillion of U.S. multinational cash stashed overseas (to avoid double and triple taxation) and turn the whole system from worldwide to territorial taxation. Jeb Bush has proposed the second and third parts here, to his credit.

I spoke with Paul Ryan a few days ago (coincidentally, the day before McCarthy bowed out), and he worried that Obama would never sign a pass-through small-business tax cut. He also worried that the Senate would never pass broad-based business tax reform. "The leadership will never do it," he said. (Orrin Hatch from the Senate Finance Committee and Senate Majority Leader Mitch McConnell would have to play ball.) He also expressed concern about the Byrd rule inside reconciliation that requires tax-and-spend-and-debt packages to reduce budget deficits.

But if you go back and read the history of reconciliation, you'll see that the Byrd rule can be whatever you want it to be. Republicans and Democrats have defined it and redefined it.

When we talked this week Ryan didn't seem to be in a mood to be all that aggressive. And when I suggested that defunding Obamacare could be put into the same reconciliation bill as corporate tax reform, he didn't say yes or no -- he decided to keep his own counsel.

But the moral of the story for the post-Boehner period is that a Speaker Paul Ryan along with the legislative strategy of reconciliation and a Senate leadership that plays ball can solve the economy and the GOP's grassroots revolt. What are they waiting for?