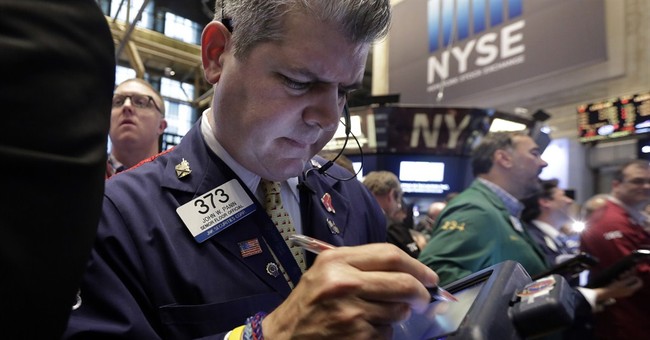 The strong May jobs report -- including a 280,000 jump in nonfarm payrolls -- reminds me of the big debate over the harmful effects of a strong dollar and falling oil prices. But where's the harm? King Dollar, along with the supply benefits of the fracking revolution, may actually be propping up a subpar economy facing headwinds from heavy business taxes and overregulation.

The entire cost structure of American business benefits from lower-cost imports and the cheaper purchase price of anything when the dollar is king and energy costs sink.

American firms become more competitive. And consumers benefit from rising real incomes in response to the energy price collapse. And it's not only energy. King Dollar strengthens consumer purchasing power across the board.

This whole wage debate around the Federal Reserve incorrectly focuses only on average hourly earnings, which are up 2.3 percent for the year ending in May. But wait a minute. If you're going to use hourly earnings, you have to add hours worked, which, in the aggregate, are up more than 2.6 percent over the past year. That yields a nearly 5 percent increase in worker wage income.

And because of the disinflationary effects of King Dollar and cheaper energy (the consumer price deflator is flat), the nearly 5 percent gain in worker wages is all real. So consumers have a lot more spending power than most economists believe. Car sales jumped by about 18 million in May. A harbinger of better retail sales?

So don't be led astray by the pessimists. The U.S. economy is absorbing the strong-dollar/low-energy nexus with very little difficulty.

Even in the financial sector, where a number of marginal energy companies issued junk bonds, we haven't seen the negative systemic effects on the banking system that the hedge fund managers predicted. Bank stocks have been rallying of late, including a nearly 3 percent gain last week despite a 1 percent loss in stocks overall.

Now, I don't deny some short-run negative effects from the high-dollar/low-energy play. As crude oil dropped 43 percent and King Dollar increased nearly 20 percent, the economy shed 2,600 jobs from oil and gas extraction and another 38,000 from total energy support services. But this is a tiny fraction of the 3.1 million jobs created over the year.

The dollar-energy pessimists also point to a negative King Dollar effect on exports and multinational profits. There may be some impact here. But let's not forget the recessions in Europe and Japan and a weakening China. So a 2.3 percent increase in real exports is not a bad amount. And when the dollar is worth more, every other export business cost is cheaper.

And yes, there has been a roughly 11 percent loss in international profits. But the story here is that the so-called currency translation effect is an accounting fiction. U.S. dollars are left overseas where they are taxed at a much lower rate than if they were repatriated. (This, of course, is part of the corporate tax problem we have.) Meanwhile, over the past year, core domestic nonfinancial profits from the gross domestic product accounts are up 7.5 percent, and overall pretax profits are up nearly 4 percent. Not fabulous, but not bad.

And when you look at the macro picture against the backdrop of King Dollar and low energy, it's still subpar, but it's not getting worse. The four-quarter change in real GDP is 2.7 percent. The Standard & Poor's 500 index over the past year is up 8 percent, with the Nasdaq gaining 18 percent. The inflation rate is nil. And jobs are growing at a steady 2 percent pace.

And what happens when Washington policy finally delivers tax and regulatory reform? The King Dollar/low-energy scenario becomes a great economic backdrop. The combination of a strong dollar, light regulation and lower marginal tax rates sets the stage for 4 to 5 percent growth, which will get the U.S. economy back to its long-term trend.

This brings me to an interesting final point. You don't hear much about the dollar on the campaign trail. But Ira Stoll (FutureOfCapitalism) and Seth Lipsky (The New York Sun) point to a possible Jeb Bush sound dollar, which would be the opposite of the crumbling greenback and skyrocketing gold and energy prices that occurred under his brother's administration.

In a recent TV interview, the former Florida governor said: "You can make a case that in the last few years, given our monetary policy ... we've been manipulating our currency. We've never had a time where our central bank is just printing money like nobody's business. And that depreciates our currency."

Well now. Jeb is certainly on the right track. Let's hope the other candidates follow along. For a million reasons, sound money is crucial to economic growth.