An Open Letter to Tiger Woods 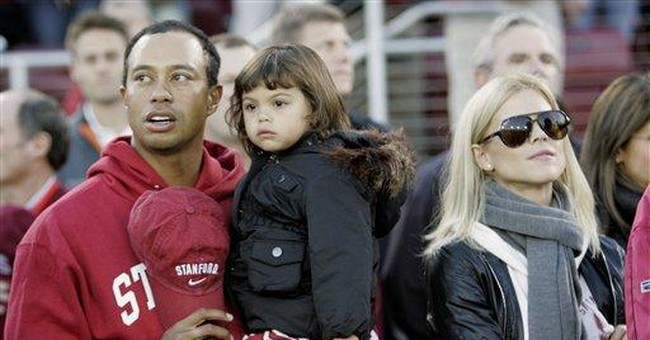 Fess up, Tiger. If you don’t, the tabloids are gonna kill ya.

The storyline so far is that for some reason your apparently furious wife Elin teed you up inside your Florida mansion with one of your Nike golf clubs, and that you sought escape by hot-footing it outside at two-thirty in the morning to your Cadillac Escalade in the driveway. But Elin kept coming at you. So you tried to slam the SUV down the driveway in racecar fashion, something you’ve probably done hundreds of times before. Only this time, for some reason, you hit a fireplug and wrapped the car around a tree.

But Elin still kept coming at you, slammin’ the club into the rear windshield. She must have had a long iron in her hand. Hell hath no fury like a woman scorned.

How you got your face scratched and wound up on the side of the road is still a mystery. But the tabs are saying a woman named Rachel Uchitel is the alleged home-breaker. That you have some kind of relation ship with her. And that story is not going to die until you put it to rest one way or another by fessing up and telling the truth.

Adding fuel to these flames, you have pulled out of your very own tournament, the 2009 Chevron World Challenge, which is scheduled for this week. Tiger, my friend, one thing you need to consider is the business angle to this narrative.

The Daily Beast is running a story about your $100 million car crash. Investigative reporter Gerald Posner estimates that even if you take a 10 percent hit on your endorsement income, this incident could cost you $10 million a year, totaling $100 million over the next decade. At risk could be your contracts with Nike, Gatorade, and AT&T. There’s also Accenture and the EA video-game series.

South Carolina governor Mark Sanford tried stonewalling, but it didn’t work out too well for him. His career is now finished. Another bad case is that of former North Carolina senator and unsuccessful presidential candidate John Edwards. He really had a bad time of it, with the tabloids literally chasing him into the bathroom. His career is finished, too. On the other hand, Nevada senator John Ensign did fess up -- about one half step ahead of the tabloids -- and he may well live to see another reelection day.

And then there’s Bill Clinton, who stonewalled about his affair with Monica Lewinsky. Woaaah! That caused one heck of a blow up, including impeachment proceedings in the House. Remember when he said that it “depends on what the meaning of the word ‘is’ is”? This was the worldwide sex-cover-up stonewalling attempt to end all marital-infidelity sex-cover-up stonewalling attempts.

Tiger, you don’t want to go there. That could be you. There are lessons to be learned about coming clean as fast as possible.

Even though I personally have only one-ten-thousandth of your media and business impact, perhaps my story will be helpful. Over 15 years ago, after missing a big speech and resigning from my career on Wall Street, the New York Times came after me with a story of serious alcohol and drug abuse. They were right. I believed then as I do now that honesty is a virtue, and I fessed up. I got sober. My saintly wife and I recently celebrated our 22nd marriage anniversary. And today I am fully employed at CNBC (for which I am eternally grateful). People forgave me. God redeemed me.

But in your case, if there is no alcohol, drugs, or infidelity, and if there is a better-sounding, truthful explanation of your events, you’ve gotta get out there and say it. As you know, your clean, serious, sober, near-perfect, golden-boy bloom is already off the rose. And if you insist on stonewalling, from now on it’s damage limitation. And that will be no fun at all. Your bottom will be lower than anything you ever imagined.

Fans love the way you play, and so do I. Sunday afternoons are a treat watching you. But you’re in a heap of trouble right now. Stonewalling, whether in business or politics, seldom pays.

C’mon Tiger. Be a mench. Fess up and clear the air. If you do it soon, you will be forgiven, and this too will pass.