Larry Keane
|
Posted: Mar 15, 2019 12:01 AM
Share   Tweet
The opinions expressed by columnists are their own and do not necessarily represent the views of Townhall.com. 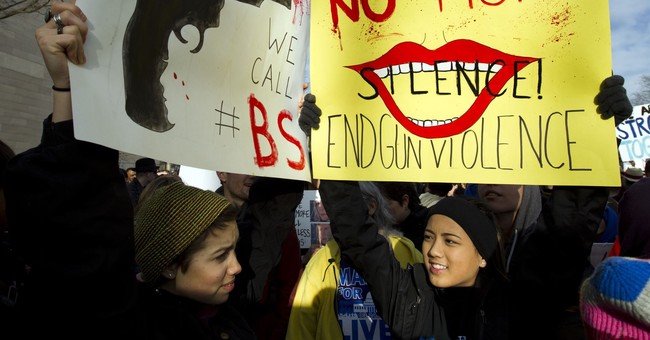 Time and again, we hear from those advocating for more gun control laws who intone with a sense of moral superiority that we need to have a “conversation” on guns. The goal, they say, is to reduce violence, suggesting that they are somehow more evolved.

Yet, just this week, some anti-gun activists and politicians were caught red-handed fantasizing about wanting to shoot politicians and gun rights advocates as well as suggesting the “doxing,” or publicly posting private information, on gun owners.

In one instance, a woman attending the Connecticut General Assembly’s Joint Committee on the Judiciary hearing on several gun control bills, was photographed texting a threat against Republican state Sen. Rob Sampson and NRA members.

“If I had a gun, I’d blow away Sampson and a large group of NRA,” a photo of the text message reads. The anti-gun activist was escorted from the hearing. Later, Sampson said that wasn’t the first time he’s been threatened with violence for standing up for the Constitutional rights of Connecticut citizens. No charges were filed against the woman.

Sneaking in A Lower Receiver

It didn’t end there. At the same hearing, Jeremy Stein, executive director of Connecticut Against Gun Violence, was escorted out of the state legislative office building for smuggling in an 80 percent lower firearm receiver. Stein had reportedly asked Bridgeport Police Chief A.J. Perez to bring the firearm component into the state building for him. The receiver was intended for use as a hearing “prop.” Both planned to testify in favor of tighter gun control laws, even as they tested the limits of existing Connecticut law and public building safety protocols.

What Stein did was to bring into a state government building that doesn’t allow firearms a piece of machined metal that’s not considered a firearm to try to convince people he was technically breaking the law since the lower receiver is intended to eventually become a firearm. He was also conspiring with the police chief of the state’s largest city to pull off the stunt. You can imagine what the reaction would have been if someone from the other side of the debate had tried a tactic like that. You can imagine, but it is not something that would likely happen.

Ironically, the hearing was about proposals covering home storage requirements that carry penalties, banning so-called ghost guns and requiring those open carrying handguns to furnish a permit to police.

That was too much for Leonard. He posted photos of Maryland citizens, some of whom he surely represents, to social media platforms with the message, “I hope the FBI runs the name of every witness who is wearing a t-shirt that says ‘We Will Not Comply. They’re a bunch of terrorists in the making.”

He didn’t end with just the character attack. He took it a step further and may have violated state law. “Time to dox some homegrown terrorists,” read another Leonard social media post.

Doxing is when personal and private information of an individual or organization is published over the Internet with malicious intent. Maryland law specifically prohibits doxing. And, last we checked, freedom of expression is still a First Amendment right.

Maryland Democratic Executive Director Ben Smith attempted a half-hearted apology, and in so doing, blamed the gun rights protestors. He said the lawmaking process requires “sober and calm deliberation,” but added, “When activists wear shirts stating, ‘We will not comply’ with new firearm regulations, that action escalates the conflict and a willingness to flout the rule of law.”

Talks about some strange ways to start the conversation they claim to want.