Larry Elder
|
Posted: Sep 07, 2017 12:01 AM
Share   Tweet
The opinions expressed by columnists are their own and do not necessarily represent the views of Townhall.com. 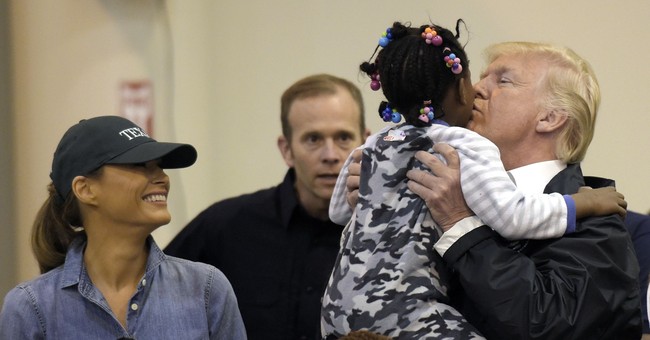 Hurricane Harvey reveals an America that many in the media seem not to know exists: a multi-ethnic, multiracial country where people, for the most part, get along. For those who claim that President Donald Trump "coarsened" our politics and "set back race relations," Hurricane Harvey was pretty bad optics.

Only weeks ago, some Democrats were counting the days toward Trump's impeachment and an early departure from the presidency. But last week they saw Trump, in Texas, looking quite presidential in his role as comforter in chief. They saw photos of a president soothing and embracing survivors, no matter their race or gender or sexual orientation. If he is a germaphobe, his fear must be in remission, as he hugged adult survivors and held kids in his arms. Texans, including black ones, appeared pleased by Trump's visit even as Democrats like Maxine Waters have denounced him as "racist," calling for his impeachment as Harvey was bearing down on Texas.

Imagine this: neighbors helping neighbors, irrespective of race. But really, this is an old American story. Frenchman Alexis de Tocqueville traveled to this fascinating new country called the United States of America in the 1830s. He wrote about what he considered an astonishing number of "mutual aid societies," or charitable organizations and clubs set up to help a community's needy. Tocqueville wrote: "Americans group together to hold fetes, found seminaries, build inns, construct churches, distribute books, dispatch missionaries to the antipodes. They establish hospitals, prisons, schools by the same method. Finally, if they wish to highlight a truth or develop an opinion by the encouragement of a great example, they form an association. ...

"The love and respect of your neighbors must be gained by a long series of small services, hidden deeds of goodness, a persistent habit of kindness, and an established reputation of selflessness. ... I have seen Americans making great and sincere sacrifices for the key common good and a hundred times I have noticed that, when needs be, they almost always gave each other faithful support."

Tocqueville considered Americans' remarkable spirit of charitable giving a matter of enlightened self-interest: "American moralists do not claim that one must sacrifice oneself for one's fellows because it is a fine thing to do but they are bold enough to say that such sacrifices are as necessary to the man who makes them as to those gaining from them. ... They do not, therefore, deny that every man can pursue his own self-interest but they turn themselves inside out to prove that it is in each man's interest to be virtuous. ... Enlightened self-love continually leads them to help one another and inclines them to devote freely a part of their time and wealth to the welfare of the state."

In the 1950s, interracial black-white marriages were extremely rare. Today, intermarriage of all races and ethnicities accounts for 17 percent of all marriages. This is why sane observers of O.J. Simpson's 1995 murder trial considered its defense a joke: that LAPD officers, including an Asian-American criminalist, seething at Simpson for having married a blue-eyed blonde, leaped at their opportunity to frame him. In liberal Los Angeles, where intermarriage is common? In the 1950s over 90 percent of Americans disapproved of black-white marriages, while recent polls say about 90 percent approve.

If America were as racist as many in the media think, why do blacks excel in two of the most competitive fields -- sports and entertainment? On Forbes' list of highest-earning celebrities, blacks occupy seven of the top 25 slots, including Sean Combs, who clocks in at $130 million annually; Beyonce at $105 million; and Drake at $94 million.

On Forbes' list of highest-earning athletes, blacks occupy 13 of the top 25 spots, including LeBron James at $86 million; Kevin Durant at $60 million; and Stephen Curry at $47 million.

Watch out, Trump-hating media. As more blacks recognize that Republicans are not out to get them, and they look at cities like Detroit under Democratic leadership, Trump can potentially tip the black vote in his party's direction more than any Republican since Abraham Lincoln.