Trump 'Disrespects' the Intel Community? What About Obama's Iraq Bug-Out?

Larry Elder
|
Posted: Jan 19, 2017 12:01 AM
Share   Tweet
The opinions expressed by columnists are their own and do not necessarily represent the views of Townhall.com. 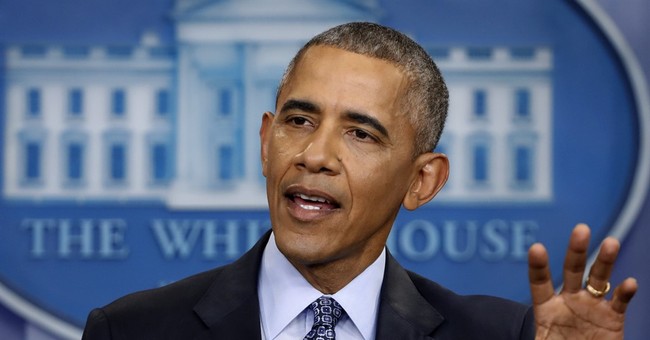 President Barack Obama and his team still engage in a hissy fit over Donald Trump's questioning Obama's place of birth. To even raise the issue is to "otherwise" the first black President. In short, they argue, it is racist. But to claim that Vladimir Putin put Trump in the White House is nothing more than an obvious observation, right? When the Supreme Court ruled in favor of George W. Bush in 2000, a number of disgruntled Democrats referred to him as "President Select."

Now President-elect Trump is being hammered over his refusal to except the intelligence community's consensus about Russia's alleged role in the election. All of the intel agencies maintain that the Russian government attempted to influence our election, and that Russia preferred Trump over Hillary Clinton.

From the outset, Trump doubted both the argument that Russia hacked the Democratic National Committee and that the release of damaging emails was designed to give him an advantage over his rival. Trump, at least before his recent national security briefing, argued that the hacking could've been done by a number of actors, including China and other state and non-state entities. Trump's reluctance to accept the apparent unanimous opinion of our intel agencies probably has more to do with his rejection of the narrative that but for Russia he would not be president.

Putin did not tell the DNC to ridicule the name of a black woman or to condescendingly suggest that the way to get Hispanic votes was through "brand loyalty" and "stories" because, after all, "Hispanics are the most responsive to 'story telling.' Brands need to 'speak with us.'" Nor did Putin get Hillary Clinton campaign Chairman John Podesta to agree that the Iran deal is "the greatest appeasement since Chamberlain gave Czechoslovakia to Hitler."

But the "Trump doesn't respect the intel community" argument raises another issue. Why doesn't Obama get the same criticism for rejecting his national security and intelligence team's advice on Iraq?

As a candidate, Obama called the Iraq War "dumb." He vowed to withdraw the troops and reposition them in Afghanistan -- the good war. As President, this is exactly what he did. But he did so against the unanimous advice of the major national security voices in his administration.

Then-Secretary of State Hillary Clinton urged him to keep a stay-behind force. So did his secretary of Defense, the head of the CIA, the Joint Chiefs of Staff, the United States ambassador to Iraq and his national security adviser.

Army Gen. Ray Odierno, former member of the Joint Chiefs of Staff, said shorty after his retirement that had there been a stabilizing force in Iraq, ISIS could've been dealt with: "I go back to the work we did in 2007 (through) 2010, and we got into a place that was really good. Violence was low, the economy was growing, politics looked like it was heading in the right direction. ... We thought we had it going exactly in the right direction, but now we watch it fall apart. It's frustrating that it's falling apart. ... I think, maybe, if we had stayed a little bit more engaged, I think maybe it might have prevented it."

Think about it. Obama, with barely two years of experience in the Senate, and no foreign-policy experience, rejected the unanimous advice of his mission security team. He pulled completely out of Iraq, a decision that aided and abetted the rise of ISIS.

Trump gets hammered for ignoring the unanimous opinion of the intelligence community; Obama makes one of the most consequential decisions by completely ignoring their advice. And, as usual, Obama gets a pass.