Obama Crowns Himself to a Third Term

Larry Elder
|
Posted: Dec 29, 2016 12:01 AM
Share   Tweet
The opinions expressed by columnists are their own and do not necessarily represent the views of Townhall.com. 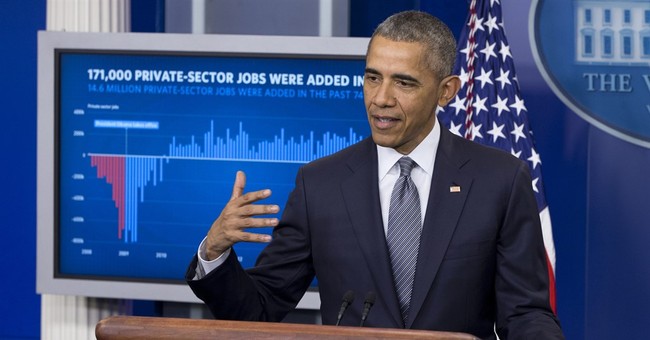 Still shell-shocked from his party's Nov. 8 beating, President Barack Obama said, "I'm confident that if I had run again and articulated it, I think I could've mobilized a majority of the American people to rally behind it" to win a third term.

When the upstart New York Jets' Joe Namath of the old American Football League upset the 19-point favorite Baltimore Colts of the National Football League, stunned the-NFL-is-still-superior sports pundits said things like, well, the Colts would have beaten the Jets nine times out of 10. But the Super Bowl isn't the best nine out of 10, is it?

Hillary Clinton lost. Obama backed her. He and first lady Michelle Obama campaigned hard for her. Obama even claimed that a Clinton loss would be an insult to his "legacy." Clinton still lost.

Besides, isn't Obama the same man who told us that "no one" was "more qualified" than Clinton to serve as president, including him? Never mind -- to offer just one example -- the first President Bush. George Herbert Walker Bush, when running for reelection against Bill Clinton in 1992, had served four years as president, eight years as vice president, as the head of the Republican National Committee, as head of the CIA, as United States ambassador to the United Nations, as a member the House of Representatives and as a decorated a World War II Naval aviator.

Obama, in making the prediction of his hypothetical third-term victory, argues that his policies are working just fine -- and the only problem is the irritating inability of voters not to understand this. They are simply not gifted enough to see it, or Clinton was not talented enough to make them. Here Obama clearly implies that he, as a better communicator than she, would've opened the voters' blind eyes and won the election.

The Obama-as-better-communicator argument arrogantly ignores the approximately two-thirds of Americans who say we're on the wrong track economically, with a similar number feeling the same way about foreign policy. It ignores the low labor force participation rate, reflected by the abandonment of the jobs market by working-age Americans who are frustrated by the most lackluster recovery since 1949.

Take Obamacare. It, maintains Obama, is a wonderful plan, even if it passed with no Republican support and only after an ocean of false promises. These promises included that it would bend the cost curve down; save the average household $2,500; and that if you liked your current plan or doctor, you could keep your plan or doctor.

Premiums went up, not down. Copays went up, not down. Same with deductibles. And yes, some of those who face hikes still get offsetting subsidies, but this just pushes the costs onto others. Who knew that providing health care insurance to 20 million by forcing insurance carriers to accept those with preexisting conditions; forcing carriers to allow parents to keep their "children" on their policies up to their children's 26th birthday; and regulating how carriers set premiums was going cost money?

Obama, a product of two Ivy League schools and the best private school in the state of Hawaii, still does not understand Economics 101, a common phenomenon with someone of his academic pedigree. But how to explain the cluelessness of his fellow non-elite, non-Ivy League educated Democrats? As with Obama, the left sees the world as they want it to be, or the world as it should be -- if they can only get the "obstructionist" Republicans out of the way. This is a most appealing perspective for a politician who survives by peddling this nonsense.

His "climate change" measures are also, according to Obama, working splendidly. Sure, the green-tech jobs that Obama promised did not materialize, and most of the government "investment" provided little if any return for the taxpayer. A devastating "60 Minutes" expose titled "The Cleantech Crash" reported that "the federal government has allocated a total of $150 billion to cleantech -- through loans, grants and tax breaks with little to show for it." Had such a televised piece exposing this outrageous "cleantech" boondoggle run in a Republican administration, the media would've cried for congressional investigations of the program's waste, fraud and abuse. But the President's climate-change crusade did not miss a beat.

In eight years out of office, President George W. Bush said virtually nothing about his successor, his successor's policies or even his own legacy. His father did likewise about his successor, Bill Clinton. But in the waning days of his presidency, Obama and his press secretary attacked his successor while criticizing his successor's cabinet choices. Obama even carps on Donald Trump's use of social media, specifically Twitter, which enabled Trump to go around the traditional anti-GOP media and beat Clinton while spending half as much money.

Compared to other presidents, Obama entered office as a young man and leaves as a young man. Hell hath no fury like a left-wing president, with plenty of sand left in his hourglass, out to preserve his "legacy."