The Rachel Dolezal-ation of the Oregon Killer 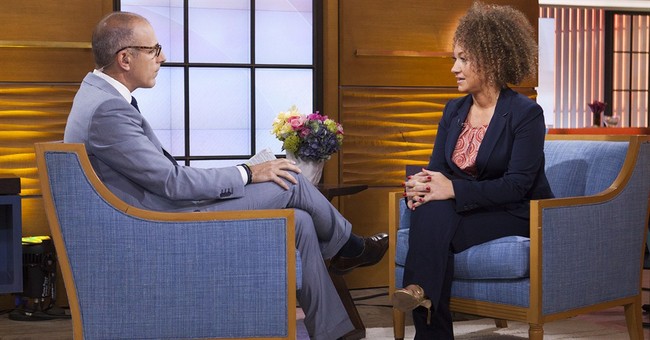 Chris Harper Mercer walked into Oregon's Umpqua Community College and killed nine people, wounding nine more. On a dating site, Mercer, whose father is white and mother is black, referred to himself as "mixed race."

The Los Angeles Times implied that Mercer was white. The Times, in a sub-headline, said he had "white supremacy leanings." The original article said: "A federal law enforcement source familiar with the investigation said, though, that authorities had obtained some of Harper-Mercer's writings, as well as a note he left behind, suggesting that he supported white-supremacist causes and opposed organized religion." The Times later changed the solitary law enforcement source to "two" sources, but added a line stating, "However, he identified as mixed-race on a dating website and lived with his black mother."

As to non-white mass killers, Selwyn Duke, writing in American Thinker, cited a Mother Jones Magazine compilation of data on mass shootings from 1982 through, at the time of Duke's writing, September 16, 2013 -- after the Washington Navy Yard murders. Duke wrote:

"Of the last 20 mass killings of that period, 9 were perpetrated by non-whites.

"That would be 45 percent, which exceeds non-whites' 37 percent share of the population.

"And what if we go all the way back to 1982? We then have 66 mass killings in which the races of the perpetrators were known, and 22 of them, or one-third, were at the hands of non-whites. Note here that America's demographics have been changing, with non-whites comprising only about 20 percent of the population in 1982; thus, if we consider an approximate average non-white population of 28.5 percent during the 31-year period in question, it appears that, again, mass murderers are slightly disproportionately non-white."

This brings us back to Mercer and his race -- at least as defined by some major media outlets.

Now President Barack Obama, of course, is regularly described as America's first black president or America's first "African-American" president. His father was a black man from Africa, his mother a white woman from Kansas. Still, Obama is rarely referred to in the media as multi-racial or biracial. The day after his 2008 election, for example, the Associated Press described the coast-to-coast jubilation after "TV news announced the Illinois senator had been elected the first black president."

CBS News, in an article headlined "'Yes We Did': Black Americans Rejoice," wrote: "People danced in the streets, wept, lifted their voices in prayer and brought traffic to a standstill. From the nation's capital to Los Angeles, Americans celebrated Barack Obama's victory and marveled that they lived to see the day that a black man was elected president."

The BBC said: "Democratic Senator Barack Obama has been elected the first black president of the United States, prompting celebrations across the country."

But then, quite inconveniently, media outlets discovered that while Zimmerman's father is white, his mother was born in Peru and raised in Mexico. So CNN and other media outlets decided on "white Hispanic."

American teen tennis star Madison Keyes, with one black and one white parent, says, "I don't really identify myself as white or African-American." But that did not stop Serena Williams, however, from ignoring her preference. "It's good to see another American, another African-American, in the semifinals playing so well," said Williams.

Similarly, golf star Tiger Woods, whose ethnicity includes Caucasian, black, American Indian and Asian, calls himself "Cablinasian." Yet when he won his first master, the media instantly dubbed him the first "African-American" to win that coveted tournament.

It all gets so complicated. But back the Oregon killer.

Again, after the Oregon shooting, most media outlets -- if they referred to his race at all -- described him as "mixed," as Mercer indicated on the aforementioned dating site. But if Obama, with one black parent and one white parent is "black" or "African-American," why isn't Mercer?

The media are often accused -- by the eternally offended crowd -- of intentionally "undermining the image of blacks." In fact, nothing could be further from the truth. The media lean over backwards to avoid any hint of anti-black sentiment. In the case of Mercer, a man with one black parent and one white parent, the narrative of mass-killers-are-almost-always-white caused the media great difficulty. But they tried their best.

After all, Rachel Dolezal, the white former NAACP chapter head who pretended to be black, says we're whatever race we think we are.