The Case Against Donald Trump 2024

Kurt Schlichter
|
Posted: Jun 23, 2022 12:01 AM
Share   Tweet
The opinions expressed by columnists are their own and do not necessarily represent the views of Townhall.com. 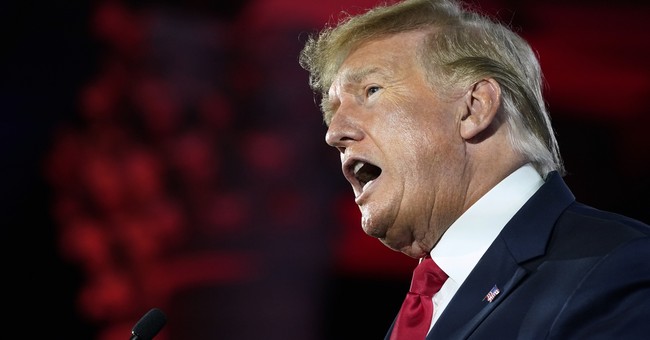 I recently set out the case for Donald Trump in 2024. There are important factors in his favor that support him trying yet again, but in GOP circles, a growing contingent of America First Republicans hope that Donald J. Trump chooses not to run again (I give him a 50/50 chance of throwing his red hat in the ring based upon what I know). The libs want him to, certainly. They think beating him will kill off the conservative-populist revolt. But what the libs do not get – because they do not want to get it – is that Trump is not our movement but, rather, the avatar of it. It is separate from him and will exist long after he retires to Mar-a-Lago for good. But why do a large number of hardcore cons feel it's time for him to retire?

As ruthlessly focused warriors for conservatism, we need to look hard at the whole picture before deciding if Trump 2.0 can be a thing. While we should appreciate his many accomplishments, politics is all about, "Well, what have you done for me lately?" If he's not the best (and the only way to prove it is through a rigorous primary with real conservative opponents, not bloated buffoons like Larry Hogan or mealy-mouthed establishment shills like Asa Hutchinson), then he needs to step aside.

The first problem for Trump is that the enemy hates him. It hates him with the burning heat of a million chafing thighs of Brian Stelter, who is a potato. There is a ceiling to Trump's support, and even some nominal Republicans will never vote for him just because he is Trump. Some people just find him and his quirks exhausting; maybe they will learn from their botched 2020 vote for a return to "normality," but maybe they won't.

It's the hatred we need to consider because it motivates otherwise demoralized Dems. Remember, our enemies will do whatever they have to do to stop him, legal or not, just as we saw last time. They will raise a billion dollars or more from the sexually-unsatisfied wine women of the suburbs and the evil billionaires of Silicon Valley. Their functionaries will indict him and his family for bogus "crimes" that are not crimes, but they do not care – not at all. The tech fascists will try to silence him to the extent they can. Every network but Fox, Newsmax, and OANN will hate on him 24/7. They will cheat where they can. They will lie shamelessly. And judging from the Dems' collective shrug over the attempt to murder Justice Kavanaugh and the manifesto of the pro-abort terrorists of Jane's Revenge, they may even use violence.

Remember, every norm, rule, and law has a Trump Exception™ that excuses whatever the enemy does to stop him.

There is no limit to the resistance that Trump's Grover Cleveland run will draw. And while it is unfair and total bull-Schiff, we need to take it into account. But, on the other hand, we also need to acknowledge that they will do the same thing to any Republican who wins the nomination. We're already seeing the take that "DeSantis is worse than Trump because he is a focused and disciplined literal Hitler!"

Yeah, focus and discipline are not exactly Trump's strong suits. We need to be honest – the guy is human chaos. Sometimes that's great; other times, it is basically him stamping on his own Schumer. In many ways – and this comes from a fan – he is his own worst enemy, and nothing seems to have changed since he left office.

A prime example of his indiscipline is his inability to stop harping on the 2020 election. I know what the problems were – I was there helping try to clean them up. The hard truth is that Trump was the head of the Republican Party and the Republican Party was absolutely and utterly unprepared for the legal fights that preceded and followed the election. If you want to place blame, you have to place it on the guy in command.

It's the states where this gets fixed, and states like Georgia have done so. But this constant bitching and moaning about 2020 is about as effective as the J6 kangaroo committee as far as moving voters – in fact, it's annoying because, in a time of $7 gas and our 401(k) dropping lower than Robert Reich on his tip-toes, no one wants to hear it. But that's all Trump talks about.

And people note that for all the dough collected to fight the fraud and shenanigans, we have not seen that it has gone toward securing future elections. Maybe it has – it would be nice to see the plan for secure elections in 2022. We know the money has not gone to help the Trump-supporting political prisoners being tormented in Merrick Garland's dungeons.

If Trump wants to make 2024 about 2020, he loses, even against President Crusty – and there's no indication so far that Trump does not want to make this all about his vindication rather than fulfilling the promise of 2016.

And what a great promise that was – the promise to put America first and to make America great again. Trump had yuge achievements, but he also had some yuge failures. He did not build the wall or at least much of it. He did not purge the woke from the bureaucracy and the military. And his establishment-friendly COVID response, plus his stubborn embrace of a vaccine that did not perform as promised, are problems. Why he never fired that malignant elf Fauci is a mystery, but it is in keeping with his terrible track record re: personnel. For every excellent Robert O'Brien or Ric Grenell in the administration, there are a dozen Boltons, Milleys, and Omarosas who were a total disaster. Scaramucci, for heaven's sake? Jeff Sessions? Really? How much trouble did Trump invite by not canning that sanctimonious loser the second he recused himself because the WaPo told him to?

Sure, Trump now has a Rolodex (look it up, millennials) of experienced folks to help him – he did not when he took office and ended up hiring a bunch of Never Trump jerks – but are we going to see the same, or a different, collection of grifters and mediocrities surrounding him again?

Trump's problem was always that at some level he remained part of the establishment – he disrupted it, gloriously, but never completely rejected it to build something that put normal Americans first. That's what we need, and it's not clear he's the guy. The final chapter of my new book "We'll Be Back: The Fall and Rise of America" sets out what the next president needs to do on Day One:

The firing of Christopher Wray as FBI director, the firing of every general on the Joint Chiefs of Staff, the firing of Dr. Anthony Fauci—they went first. Their acting replacements were already identified; the computers and official cell phones of the fired personnel were already being secured by federal marshals in case any investigations became necessary—and they would be.

He signed the military orders next. The first was a strategy document clarifying that the No. 1 strategic threat to the United States was neither "climate change" nor "domestic white supremacist terrorism," but enemy states like Red China, Russia, Iran, and North Korea…

Next came the orders banning critical race theory–type training and programs throughout the government, as well as directing that the occupant of every federal job with a title that included any of the words "diversity," "inclusion," or "equity" be terminated. Many canned functionaries would sue over their lost jobs; well, that's what DOJ lawyers were for. And on the subject of the Department of Justice, he executed an order firing every United States attorney and another order requiring that the attorney general personally sign and approve any investigation of any kind involving administration personnel.

There is more, much more, to be done (a battle plan for the next president's war on woke is a whole chapter in the book), but we need a Republican to win in 2024 to do it. I saw Trump in February up close. He looks great – slimmer, energetic, coherent, a true contrast to that ancient dementite currently wiping out when he hops on his ten-speed. But he's still old – he would be 78 on Election Day, and that is pretty damn ancient. Plus, if Trump started showing the slightest signs of decline, the regime media would certainly not hide it like it is trying to do for the mush-slurping Matlock superfan.

Here's another factor. We have viable alternatives. It is not either Trump or some $5,000 suit full of rancid Miracle Whip like Mitt. Obviously, Ron DeSantis is great – he clearly knows what time it is, and he does not get embroiled in personal squabbles (though I was always entertained by Trump's personal squabbles, except when they got in the way of destroying progressivism). Tom Cotton, Ted Cruz, Mike Pompeo are all out there and would do well if elected. Others would not. Nikki Haley and Kristi Noem want to run, but they are awful – and I would not put it past Trump to pick one of them as veep since they go all out to flatter him. Again, that personnel problem…

I like Trump. I voted for him in 2016 and 2020, and I even wrote a book defending him from the lies of the left. But I don't work for him and I have never gotten as much as a Christmas card from him, so I'm free to tell hard truths. We need to assess Trump honestly and in full – he has a lot of factors in his favor for 2024, and he has a lot of factors against him for 2024. But this is not about Trump. This is about winning. If he does run, let's hope there's a tough primary to sharpen him up for the general. And in that primary, each of us is going to have to decide whether Trump is right for America again in 2024.

Conservatives Must Stand Together and Fight. Join Townhall VIP. And Check Out This Week's Stream of Kurtiousness, Republicans' Great Midterm Plan: Betraying Us. And my podcast, Unredacted.

Pre-order my new non-fiction book, We'll Be Back: The Fall and Rise of America, which talks a lot about 2024 and provides a detailed to-do list of progressive bashing for the next president, whoever he is. And don't forget my Kelly Turnbull series of conservative action novels. The latest is The Split, but get all these action-packed bestsellers, including People's Republic, Indian Country, Wildfire, Collapse, and Crisis!