Gee, I Wonder Why Most People Are Shrugging Off Omicron?

Kurt Schlichter
|
Posted: Dec 02, 2021 12:01 AM
Share   Tweet
The opinions expressed by columnists are their own and do not necessarily represent the views of Townhall.com. 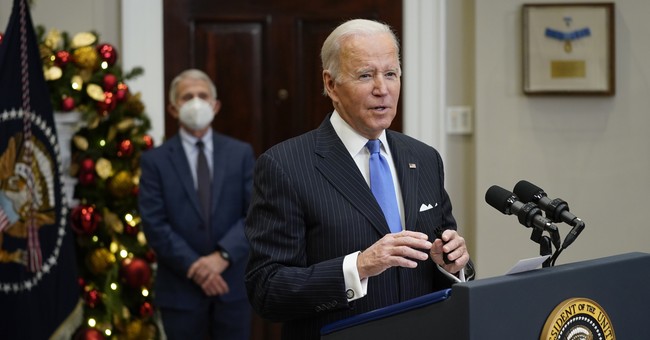 The news of the emerging Omicron variant was greeted with a giant shrug by most of America, and it’s no surprise why. The total failure of our establishment to earn our trust over the last two years of this pandemic made it inevitable that a huge number of people, at best, don’t care, and at worst think it’s a calculated lie designed to prolong this nonsense. The COVIDians are positively turgid over the idea of more mandates, more lockdowns, more masks, and more viro-fascism. So when the CEO of Moderna states that the vaccine might not be as effective against this new mutation as to earlier ones, in direct contradiction to what President Asterisk assured us just a day before was “unlikely,” we just see it as more bullSchiff shoveled by the manure mob.

They’ve lied to us before, and often, and then they get all huffy when we point out their lies. You are not denying science by pointing out how wrong, and how often, Fauci has been. That malignant dwarf is so high on his on supply that he’s now offering his insights on politics to eager legacy media hacks. His takes are, no surprise, just as stupid as his takes on COVID.

It’s not a conspiracy theory or kookiness to assess that our so-called leaders have failed in every way in this crisis. Look at Biden – the guy who was going to wave his magic wand and make it all better has seen more people die under him than Trump. But the establishment never criticizes this guy; why would they, since he gives them whatever they want?

They lied to us. The experts told us masks are no good, then that they are, then that you need two, then none, then masks again. And they knew the first mask denial was a lie – at least they believed it was, making the fact that what they intended to be a noble lie to keep us rubes from using up all the mouth thongs was actually the only time they got anything right in this whole sorry saga.

What about natural immunity? They never discuss it, yet the science – I was informed that science is super important – says it gives you the best protection. How come it’s never part of the discussion? We never get a reason, just a demand that we take a drug those of us who beat the virus might not even need. And a booster too because, well, shut up and obey.

Look at the vaccine. It’s a nice drug. Like all drugs, it has some side effects, but it does seem to make it less serious if you do catch COVID. If they sold it as that, fine. But they sold it as preventing COVID, which we know it does not do, nor does it keep you from spreading it. Yet they never came out and said, “We were wrong when we told you that you would not catch it and get your life back if you took this drug. Here are the facts as we now know them.” No, they accused you of denying science, whatever that means, and hordes of bloodthirsty blue check sissies began toobining to their fantasies of murdering those who will not submit. There’s no humility, no transparency, just a desperate scramble to keep the emergency powers our society idiotically invested in these incompetents. So, this is their time to shine. No wonder it goes on and on.

Fauci loves this and never wants it to end. Ever. And if you disagree, point to one shred of evidence that this is not true. What has the evil elf ever done that lessens his own power or prominence? Nothing. Here’s Exhibit A for my assertion: Turn on CNN. He’ll be right there, demanding you submit to his tiny will. But don’t look for him on, say, Hugh Hewitt, who told him to his smug face that he lacked any credibility and should quit.

The fact is that we gave a bunch of lab-coated human beings power, but we forgot about human nature and allowed them the “But muh science!” trump card to escape accountability. Fauci recently, before opining on January 6th, essentially claimed that to oppose him is to oppose science. He’s not science. He’s an intensely fallible little man. This is the problem with so-called experts – well, one of the problems, another key one being that they mostly suck at what they purport to be experts at. When progressives insist that we give up our sovereignty to the rule of experts, the unspoken premise is that science is going to be their sole decision-making criterion. But that cannot be – they are human, or in the case of that ridiculous gnome Fauci, humanoid. Human beings are never neutral and never disinterested. Human nature always intrudes. Humans are selfish, egotistical, proud, arrogant, and often foolish. And those adjectives make up Fauci’s CV.

This is why we have – wait for it – a system of checks and balances instead of a dictatorship of the incompotentariat. Moreover, even if the premise of “pure expertise” was true, we do not want a scientist with narrow alleged expertise making societal-level decisions. Coming up with measures to keep us from catching COVID is not the only question. What do the proposed measures do to the economy, to the culture, to kids’ development? These are societal decisions, and as the 1/6 onanists keep reminding us, our democracy is very important. Yet, these people are the first to cut us normals out of having a say in our own governance. We elect politicians to synthesize information and consider the effects on all aspects of society, not just the narrow issue regarding the mechanics of a glorified cold.

So don’t look for normal people to panic like the clown governing New York did, cancelling elective surgeries. We are Chicken Littled out – the sky is always falling and the only thing to do is give up more of our freedom!

No. We’re done. If you want a vaccine, get it – hell, you probably already have. Get a booster if you want it. Or don’t. Go out. Live your life.

And GOP pols, stop playing along with this farce. It’s been two years – two years – and it will never end on its own because Dem politicians love the power, hack docs love the limelight, and people with empty lives love the excitement of the faux perma-crisis.

You need to stop it. Open everything. No lockdowns. No mandates. No panic. Let people live their lives. Channel Ron DeSantis.

And tell the pandemic pack to go boost themselves.

Conservatives Must Stand Together and Fight. Join Townhall VIP. And Check Out Last Week's Stream of Kurtiousness, What's Next Thanksgiving Going to Look Like After Democrats Are Ground into Sausage? And my podcast, Unredacted.

You know what’s truly contagious? My conservative action novels. My sixth Kelly Turnbull thriller, The Split, shows what happens when America splits into red and blue countries. Get all six bestsellers, including People's Republic, Indian Country, Wildfire, Collapse, and Crisis!