Kurt Schlichter
|
Posted: Dec 24, 2020 12:01 AM
Share   Tweet
The opinions expressed by columnists are their own and do not necessarily represent the views of Townhall.com. 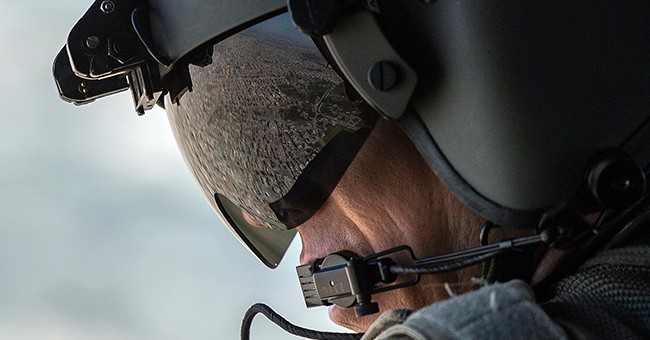 This month is the 30th anniversary of me arriving in the Persian Gulf for Operation Desert Shield, which became Operation Desert Storm, which finally became the Operation Desert Something that counts for the third star on my perfect attendance ribbon. And this milestone arrives coming just as our military ceases to be a serious organization.

Look, I’m no Audie Buttigieg terrifying the Taliban from my workstation, or a Dick Blumenthal giving Charlie what for during the Tet Offensive from Fort Connecticut. I just showed up a couple times. Thirty years ago right now, I showed up in a place called Log Base Alpha out in the middle of the Saudi Desert.

I ran a heavily armed carwash, and due to the might of VII Corps – the most powerful military formation in human history – the closest I came to seeing any action was watching CNN. Note that this was before CNN became a steaming cesspool of commie lies and talking taters.

A serious military can do seriously amazing things.

And an unserious one can do seriously terrible things.

I fear we are in the unserious mode today, and with a Biden* administration looming there will be no push towards the kind of seriousness that would keep thousands of body bags from coming home the next time we face a serious enemy.

Note that I speak of senior leaders not the troops, though the unseriousness will eventually trickle down to the squad level if not purged.

So, what do I mean by “unserious?”

Well, we have a lot of generals and admirals out in public talking about how important diversity is, as if they are barely keeping a lid on the cauldron of prejudice that is our military. It is pleasing to the SJW hustlers in D.C. It is pleasing to our enemies. It is not serious.

Serious is figuring out how to wipe out the Chinese growing forces before they sink our Pacific fleet, which if they cannot do it today, give them a couple years. Unserious is babbling about diversity all the time.

The military is, or rather should be, the antithesis of diversity. At the outset the diversity fetish – and generals play this idiotic game because their civilian leaders reward it – is based on the assumption that the military is rife with racial, sexual, and other bigotry. That is part and parcel of the poisonous critical race theory analysis of society – all aspects of society are evil, and all aspects of society must be purged and purified. Guess what the cultural hand sanitizer is? Marxism.

But, back to the military. Fussing over diversity is a false confession of systemic racism (and other -isms) in the military, and it’s a damnable lie. The military is not only not racist, it is America’s leader and role model for equal treatment of citizens. When I left the Army and went to Loyola Law School, where the rich scions of the Westside libs went if UCLA wouldn’t take them, you know what shocked me most? Their parochialism and soft bigotry. Oh, they weren’t out spewing invective like some Klan jerk (I remind you that the KKK is a Democrat creation). They just didn’t know anyone whose skin tone wasn’t mayonnaise, and being nice to their gardener was about as far as they went. I had just come from a place where everyone was different, yet were in all important ways the same – camouflage.

Fun Army Aside: I deployed from Germany and did not get those bitchin’ desert camo uniforms until after the ground war ended. I went through the whole war dressed like a tree in a place with literally no trees.

Here’s a simple fact: every hour an infantry company spends listening to some consultant explain how a man chose to be a woman and we all have to pretend he’s now a girl is an hour that infantry company is not training to destroy our enemies through fire and maneuver. Someone is getting destroyed in the next war, and if we aren’t destroying the enemy, then the enemy is destroying us.

“My condolences, Mrs. Rodriguez, on the loss of your paratrooper son. I want you to know that we generals made a conscious decision to take time away from training him relentlessly in the crucial skills necessary to survive and win on the battlefield and instead tried to teach him that America is a racial hellhole and that gender is a matter of whim. You can be proud that he rests in peace forever woke.”

Oh, that’s not a joke. You have 24 hours in a day to prepare. I say use all 24 of them to prepare for war. Our unserious military leadership disagrees. It is literally deciding that training in actual military stuff is less important that indoctrination in the kind of gooey nonsense we feed Ivy League sophomores with daddy issues.

Commanders set priorities. It’s their decision. They need to own it.

In any case, this roiling idiocy over racial identity has got to be making the Chinese – who are deadly serious – howl with laughter. In fact, if they did not know us better – and from the sloppy slobbering corruption of our ruling class, they know us pretty damn well – they might worry that our SJW insanity was really just a clever way to punk them.

But they do know us well enough to know it’s real. When you have generals and admirals talking about diversity when they could be talking about, say, taking hills or not crashing our destroyers into cargo ships, then diversity is the priority. That is a choice. And choosing that is absolutely unserious.

Your Christmas, Hannukah, and Kwanzaa Gift List Must Include Crisis!

Nothing says holiday cheer like my action-packed novels of liberal-detonating fun! Get the woke conservative, or the unwoke liberal, in your life my new conservative action thriller Crisis. Also check out the other four novels in the bestselling series, People's Republic, Indian Country,Wildfire, andCollapse.