Flying the Flag Is a Secret Trump Handshake

Kurt Schlichter
|
Posted: Oct 12, 2020 12:01 AM
Share   Tweet
The opinions expressed by columnists are their own and do not necessarily represent the views of Townhall.com. 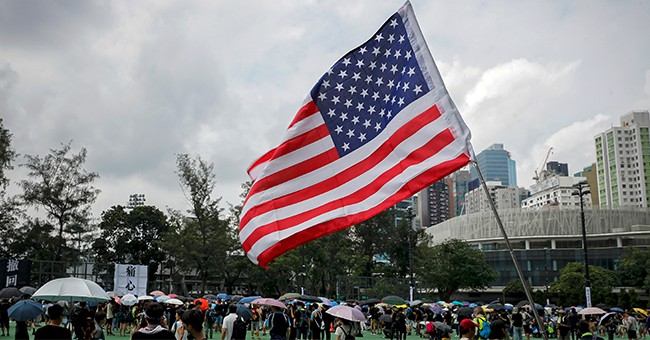 Among the threats of persecution and death we face for supporting President Trump are some that are frankly hilarious. It’s one thing for libs to try to leverage fear to intimidate their patriotic opponents; it’s another thing to try it when they think that Kevlar is a hip Indonesian spice you sprinkle over your kale, and that SIG Sauer is a happening non-binary Swedish stand-up comic who doesn’t tell jokes because laughter is racist. We recently had Chris Hayes opine that, as soon as they install a Grandpa Badfinger regime – and even before Kamala can exercise Botox Nan’s new 25th Amendment option – we Trump supporters should be hauled before “some kind of truth and reconciliation commission” to confess and atone for our sin of refusing to genuflect before the garbage establishment. Keith Olbermann, who apparently still exists for some reason, wants to go one better and convict Trump supporters of political crimes. One can only assume that they will embark on the mission to arrest us with their tweets locked and loaded.

Now, if the fascist fantasies of pampered effete liberal male-identifying creatures provide amusement to those patriots whose response to being gathered up for political re-education and/or punishment would come in a rainbow of calibers, millimeters, and gauges, right now most people would prefer to avoid the hassle of overtly battling their neighbors over Trump. Sure, some of us enjoy taking to Twitter to provoke leftist idiots, but I repeat myself. Others delight in putting that bumper sticker on our ride, or sticking a Trump sign in our yard. But normal people generally eschew overt political activity if it’s going to be a pain in the Schumer and confine their patriotic demonstrations and riots to the ballot box.

But they still want to be heard without the annoyance of dealing with some man-bunned neighbor shrieking that a sign in their yard supporting DJT is “literal violence” that has his woke 8-year-old “literally shaking.” That’s why these folks rely on hidden signals to demonstrate their support for the greatest president since Ronald Reagan.

In many places where Trump is popular, like America, reports tell us that you see a lot of Trump signs. Other places, not so much. I live in Ted Lieu’s district – thank you for your thoughts and prayers – and you just don’t see a lot of Trump signage here. You do see some around, usually on houses with defensive obstacles and clear fields of fire, and it’s got to freak out the woke wine women, the frigid Karens, and the Volvo-driving soft boys who make up the vocal local left.

Note that you do not see much Biden signage either, and what you do see is often associated with people who insist have yard signs that inform their neighbors about how hate has no home there, how black lives matter, and how they believe in science. This is presumably in opposition to all their neighbors who apparently rent out a room to hate, do not think black lives matter, and who refuse to believe in science. Remarkably every one of these luddites who hate science has power lines and cable running into their homes, which seems weird. Regardless, the properties of these liberal exhibitionists constitute maybe one homestead in a hundred. This lack of excitement seems to reflect how most Democrats are approaching this election with the same sense of grim necessity they approach their periodic colonoscopies. For a guy the CNN/MSNBC/Chet the Unicorn poll has 72 points ahead, there’s more enthusiasm at your average Calvinist wake. There is – and I swear this is true – a sign on a main throughfare here in Lieuville that reads “2020 BIDEN – ACCEPTABLE UNDER THE CIRCUMSTANCES.”

Can you feel the heat?

But while there is a paucity of posters and no surfeit of signs, there are plenty of American flags. Now, you always see a flag at a Trump sign house, but as Don Jr. observed, you never see a flag at a house with a Biden billboard. Liberals are to manifestations of patriotism as Dracula is to garlic. It’s the other, un-signed houses that are flying Old Glory that are interesting. What’s up with them? There’s no big patriotic holiday right now, unless people are getting into the Columbus Day spirit, and doing that usually takes the form of conquering North America. Yet there are a ton of flags flying. Why?

Because it’s a hidden signal, a secret handshake. If someone has a flag up, he’s down for Trump. Period. And no, I am not spilling the secret to liberals. Except for the occasional troll, no lib is ever going to read this. They are too busy drinking screw-top Trader Joe’s Chardonnay with their nose buried in a copy of Harry Potter and the Fifty Shades of White Fragility.

And there are other ways to send out the Trump bat signal. Like gay men on the down-low in old timey Hollywood would let slip that they were a “Friend of Dorothy,” there are a multitude of ways to show you are a Friend of Donald.

You can wear clothes referring to your past or present service in the American military. My Army ballcaps and shirts get nods from folks who understand that military service is rarely the domain of people whose policy priorities include penalizing pronoun crimes. Likewise, when someone observes that “masks are stupid,” the chances are it’s a Trump supporter and not some Democrat sheep who delights in the total submission to authority that results in him sporting a piehole thong as he putters about alone in his Prius. Or when someone mentions “I don’t watch the mainstream media,” or that we need “law and order,” you know you are in the presence of a patriot.

Now, if Trump should lose and the Democrats take over the Senate, the oppression will increase. Like we have seen, they actually want to create a totalitarian dictatorship in conjunction with their tech pals and corporate lackies. So, all these tactics, techniques and procedures people are practicing now will come in handy if the Democrats get their wish for total power, at least until the inevitable backlash that will make the fussy likes of Chris Hayes and Keith Olbermann regret their choice to figuratively fire on Ft. Sumter again.

It's Time for Conservatives to Stand Together and Fight. Join Townhall VIP.

Look out because the fifth volume in my best-selling conservative thriller series, Crisis, is coming in November, so prep by reading People's Republic, Indian Country, Wildfire, and Collapse. Also, get my new intentionally non-fiction book The 21 Biggest Lies about Donald Trump (and You!)!