Kurt Schlichter
|
Posted: May 20, 2019 12:01 AM
Share   Tweet
The opinions expressed by columnists are their own and do not necessarily represent the views of Townhall.com. 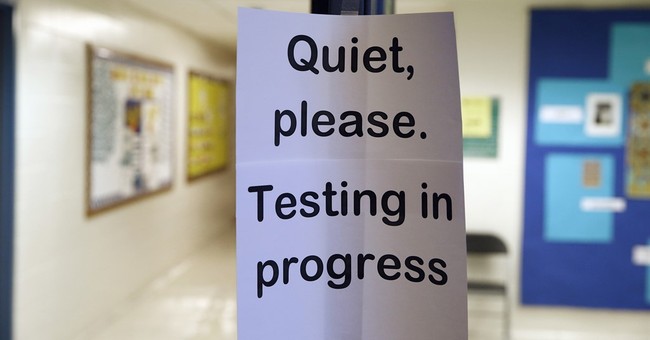 The latest tactic for the elite to shaft Normal Americans is the obnoxious “adversity score” that the academifascists who run the SATs plan to introduce as a way to give a fig leaf of objectivity and fairness to their screwing over of your kids in favor of the kids of people they prefer. Do you think there is any chance, and chance at all, that these secret numbers based upon secret factors and kept secret from you will make it more likely for your children to get into one of the elite schools?

If only someone had predicted this kind of social credit nightmare…

Now, we know for damn certain that the rock-bottom “adversity scores” of the pampered brats of the elite in politics, Hollywood, the media and the corporate boardrooms won’t hold them back. The elite’s gonna elite. We saw a few particularly dumb rich people get swooped up by the FBI, but for every past-prime starlet about to method act the role of a convict at a minimum security women’s prison, you know there are a hundred smarter, subtler wealthy cheats whose useless Ashleighs and Kadens are currently wandering the halls of Harvard, Yale and the other Skeevy League campuses, literally shaking because someone expressed a dissenting opinion.

No, these “adversity scores” – like every other scam the elite pulls – are a fraud designed to increase the arbitrary power and control of the ruling class. “Adversity scores” are manifestly not designed to cull out those applicants with the least adversity. They are designed to cull out your kids in favor of kids in the political demographics the elite prefers. The schools the admissions racketeers gatekeep are the gateways to the elite, and the likes of our spawn need not apply. The talented kids of middle managers, soldiers or other uncool people who probably go to church and do not even subscribe to the New York Times? Forget it. This is another way for our garbage ruling class to promote “diversity,” by which it means a wide range of people who can be brainwashed into sharing the elite’s liberal elitist views.

“Adversity scores” seek to impose (illegal) racial, political and socio-economic quotas without actually saying so by pretending that this is just a new objective, transparent and fair way to evaluate the “whole person.” But, of course, this is obviously baloney, and that’s why they want to hide the process from examination. Moreover, they appear to be creating these bogus standards by embracing every condescending and cheesy stereotypes of the people this is designed to let them select, like single motherhood, poverty and crime. Congrats, hardworking Normal Americans who happen to be of a racial or ethnic minority! In the collective collectivist mind of our crummy elite, you’ve been pegged as ghetto-dwelling delinquents from broken homes.

That’s who they see you as.

That’s all they will ever see you as.

Oh, and they consider Normal Asian-Americans as especially undiverse. All that hard work and focus and sacrifice and Tiger Momming…sure, Asian-Americans are different from everyone else in their amazing dedication and success, but that’s the wrong kind of diversity, don’t you know? Diversity is only good when it’s aesthetic, or better yet, political. It’s bad when it actually reflects effort and achievement, because those derive from individual effort rather than from useful narratives of collective oppression.

The ruling class wants to make college admissions a political act, and its members hate your politics. How do you think your kid is going to fare under their system?

Let me give you a hint.

Say it with me…

But here’s another idea.

It’s kind of radical, so bear with me.

How about we use just one criterion for selecting those who will get an opportunity to attend what are allegedly our “best” colleges (that’s not quite true either, but that’s another column)?

Let’s use this thing you might have heard of called “merit.”

You get a bunch of points for…wait for it…academic merit by doing well on a hard test that shows your breadth of knowledge, ability to write, and the skills you have worked to master during high school.

Then you get a few points for things you have actually accomplished. Maybe you trained to be a good football player. Maybe you are a talented painter. Maybe you served your country in war while the rest of the aspiring freshman were back home smoking dope, listening to whoever Drake is, and texting each other about microaggressions.

You get no points, none at all, for where your grandpa immigrated from, or who you pray to, or the type of people you find sexy. These immutable demographic attributes are meaningless anyway. We should focus on – wait, has someone beaten me to this concept by ~50 years? – the content of your character, as demonstrated by how hard you have chosen to prepare for higher education.

Why, even our kids might just have a shot at the academic crown jewels our taxes subsidize in a system like that.

Now, the elite hates this idea.

Why? Because objective standards are rigid and unbending and…difficult to game. The elite hates objective standards – merit – because when they are forced to make decisions based on merit the elitists lose their ability to decide how to divvy up the spoils based on the elite’s own subjective criteria.

That’s why merit is the only way your kid will ever get a crack at these opportunities.

When your kid gets screened under the elite’s “whole person” analysis, he or she will get screened right out.

Active in his church? He probably believes in Jesus and not killing babies. Circular file!

Dad’s a truck driver and mom stays home with…wait, four!...kids. Chances are this applicant never even thought to question which bathroom xe should use! Flush!

From Texas, and not even Austin? Republican! Kill this application with fire!

“Adversity scores” are just the latest way for the elite to try to ensure you don’t share in the benefits of a society that we Normal people – who are Normal without regard to race or anything else except their love of country and their inclination to work hard and play by the rules – built, feed, fuel and defend.

But this is our country.

And why should we be second class citizens inside it?

We Normals support the parasitic university system with our tax and tuition money. Like the rest of the institutions in our society, it’s not there for the sole use and amusement of a bunch of liberal blue city jerks.

And we’re not going to be exiled from full participation in a society that would be devouring itself – literally – within 72 hours if we Normals ever chose to say, “Oh, the hell with this,” load our many weapons and walk off the job to wait for the whole sordid mess that is the modern America our garbage elite has ruined to collapse before we come back to restore order and rebuild it.

Time for the GOP to stop being useless and take a stand for Normal Americans. Republicans, explain to the arrogant poohbahs of academia that the party we fund ends if this nonsense begins. Fight for us. And win over Normal Asian-American voters forever.

No merit, no money.

I almost hope they test us.

What’s bitterly amusing is that I threw in a concept similar to “adversity points” into my action-packed yet super-snarky novels about the United States’ split into red and blue countries, People's Republic, Indian Country and Wildfire. I actually worried that it seemed so stupid and crazy that no one would believe it, yet here it is, an actual thing. There’s a lot more stuff in them, stuff that keeps coming (horrifyingly) true. Plus, the hacks who sank the garbage scow flagship of Conservative, Inc, TheWeekly Standard, called my books “appalling,” so you’ll totally dig them…