Kurt Schlichter
|
Posted: Apr 16, 2018 12:01 AM
Share   Tweet
The opinions expressed by columnists are their own and do not necessarily represent the views of Townhall.com. 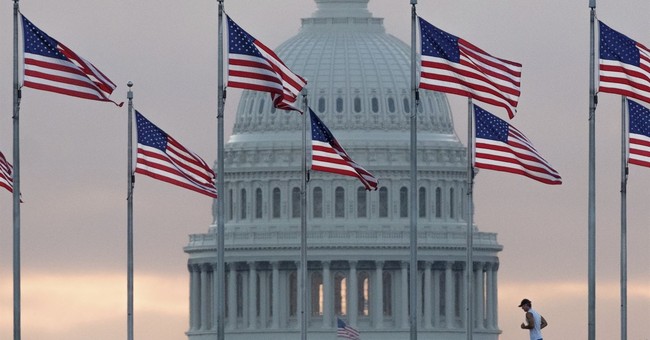 There is a huge opinion schism between conservatives inside the Beltway who think a midterm Democrat tsunami is coming, and many conservatives outside the swamp, in America, who are not so sure. One thing is certain – the gimp box media and the left’s Fredcon enablers are working overtime to psych us out and make defeat a done deal. But nothing is a done deal. We have six months. The Republicans just need to get smart and fight.

First, the bad news. The liberals are angry and motivated and they are clearly going to vote. The big question is whether they are going to manifest in much higher than usual numbers in patriotic districts now held by Republicans instead of merely running up the score in places the like the shooting gallery districts of Chicago or the feces n’ syringe districts of San Francisco that already go 70% Democrat. So those hellholes double the number of voters and go 80% Democrat? Big whoop.

It’s the toss-up districts we need to worry about, ones where the elections are usually close and the demographics include a lot of fussy soccer moms who think Trump is icky and who might let that outweigh their tax cuts and fattened 401(k)s. A lot of those districts are repped by soft, lazy GOP incumbents who aren’t in fighting shape, and this cycle, the weak shall be culled from the herd.

Democrats are trying to be clever, suckering the saps by recruiting liberal vets and law enforcement where they can and playing these collaborators off as something other than the hard left goose-steppers the modern Democratic Party demands. That bait n’ switch strategy worked in 2006, when a bunch of alleged moderates got elected and promptly did everything Nancy Pelosi told them to. They no longer exist, the voters having wised up. The Democrats are hoping the voters forgot so they can run the same grift again.

But the Democratic Party changed in the last dozen years. There’s no room anymore for the kind of Democrat who caters to his district’s needs instead of heeding the commands of the gyno-beanie wearing #Resist weirdos. Democratic primary voters may well choose not to play ball and nominate the loonies – well, the ones who are openly loony instead of the ones who pretend to be sane but who will inevitably go loony left once they get to DC.

Dems played it smart with that Conor Lamb guy, who could be a wimpy Republican based on his pretend positions. It didn’t help that the GOP picked a stiff to run against him, one who was expressly anti-union in a union district to boot. Yet Lamb still barely won, so a little more enthusiasm by the GOP voters and he’d be another crushed Dem dream. Even Roy Moore barely lost, but we could make it a little easier on ourselves in the future by not nominating creepy weirdos.

Yes, the Democrats do have a major advantage in the fact that the Republican establishment, especially in Congress, is largely a gaggle of drooling idiots. From Sissy Sasse to Foamy Marco, these fussy failures seem determined to demoralize the base with their tedious moralizing about how “We are better than that” and “Oh, well I never.” The GOP would have no problem if these dorks had just one tenth the will to win as they do the will to posture for the benefit of a liberal media that hates them and that will disembowel them the moment they stop being useful idiots and become merely idiots.

A bunch of Republicans are retiring, but then a lot of them are squishes who frankly don’t fit with the GOP base anymore. The base now demands results, which make congressing a lot less fun than it used to be. These time-servers hate when stuff, like results, is expected of them. Paul Ryan is leaving too; luckily for the GOP, Nancy Pelosi is not. Ryan’s departure may or may not have to do with him not wanting to be held responsible for November, and it’s a mixed blessing. One on hand, he’s a prodigious fundraiser, and the GOP is raking in the bucks, which is good. But Ryan seems AWOL on the Doing Something front. Oh, wait, he would really like to get DACA done before he leaves, because nothing excites the Republican base like giving illegal aliens amnesty.

If Ryan was the selfless guy we keep hearing about, he would ditch the speakership now and turn it over to someone who wants to get aggressive and get the base excited. But no, because at heart, what is important to the establishment GOP is maintaining their sinecures. Keeping the country conservative, not so much – conservatism is something you yak about during election year but never actually get around to doing. You know, it’s not who we are or something.

Mitch McConnell, who swings from being awesome (Justice Gorsuch) to being awful (everything else), is doing the same treading water thing. The base is furious that he’s letting the Dems bottle up the nominations of conservative heroes like Maybe-Someday Ambassador to Germany Rich Grennell. Mitch huffed n’ puffed about keeping the Senate in session to hold the confirmation debate, but he rolled over and, as this is written, the Dems from red states whose seats we could snatch are back home campaigning. That’s a win-win for the Democrats. This is baffling, because imagine the energizing effect on our voters’ morale if Mitch had these wheezy Democrat windbags on the Senate floor in their jammies at 2:30 a.m. Saturday trying to explain why their party is discriminating against a gay nominee.

Then there is the Trump factor. First, if you saw his CPAC or other recent speeches, you know he’s totally committed to winning the midterms. The guy is a competitor, and they have not beaten him yet. While the DC/NYC axis has decreed that he’s hated and loathed and hated some more, that’s not exactly showing up in the polls. Rasmussen has him at around 50% approval, and the economy is improving just like he promised. Out here, beyond the Beltway, nobody seems to be abandoning Trump.

The danger is the other side’s base is activated, but how will the Dems activate normal voters? Democrats may have to run on the platform of “Don’t believe your lying eyes about the economy getting better – instead, let’s spend 2019 impeaching Trump for cavorting with formerly hot women over a decade ago!”

Now, impeachment is a key issue the GOP can exploit because a big part of the idiot corps that buffoons like Ted Lieu and Maxine Waters cater to is going to demand impeachment. The fact that there is no crime is irrelevant. Mueller has nothing, as we all know, and Trump is already following the strategy of taking his case against this corrupt, conflicted deep state hack to the people. James Comey’s embarrassing self-immolation is also helping defuse this bogus crisis. That Looming Doofus, with his petty whining about his hurt feelz and his mean girl snippiness, has turned himself into a punchline. “Oh, well I never bothered to tell Trump that the pee pee dossier came from Hillary’s campaign because of, uh, er, integrity.”

The disgraceful violation of basic rights that was the Michael Cohen raid – hey, who needs due process or the attorney-client privilege when you’re #resisting? – showed the base what’s really going on. This is serious stuff – if these creeps retake power, what makes anyone think they will ever let it go again?

So November is more than just a political scuffle. It’s existential. When you have Democrat tech titans squealing over the thought of a “civil war” on Republicans and a leftist cultural campaign designed to drive half of the population out of the public sphere, you know it’s important. We either win in November or the most dire hypotheticals of our country being split apart or even in conflict might well migrate from the “Fiction” stacks to the “Non-Fiction” section.

Republicans, get it together. Defy our expectations. Get smart and fight.