Kurt Schlichter
|
Posted: Apr 09, 2018 12:01 AM
Share   Tweet
The opinions expressed by columnists are their own and do not necessarily represent the views of Townhall.com. 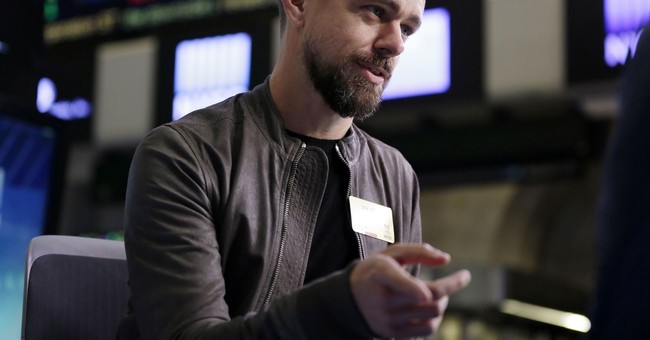 Tech titan Jack Dorsey of San Francisco-based social media platform Twitter applauded an article in something called Medium in which some other hipster CEO described how liberals intend to crush Normal Americans into serfdom in a bloodless “civil war.”

It will just sort of happen. Why? Because. Americans will simply decide to be like California because of reasons and phew, no more troublesome conservatives and Gaia is saved!

Well, that’s a kind of war plan. Perhaps by unleashing the power of hoping so they can utterly subjugate the half of America that voted against Felonia Milhous von Pantsuit and drive the people who actually operate and defend this country into silent obedience.

Now, I know what you’re saying. You’re saying, “Why do a bunch of San Francisco dorks think that 150 million Americans with 300 million guns are just going to give up their rights and their say in their own governance and submit to the commands of people who eat kale by choice?” That’s a fair question, and they have an answer.

Because you just are.

I didn’t say it was a good answer.

Recently I wrote a long column here describing the ugly realities of an actual Second Civil War – realities that are much uglier for the anti-freedom liberal side in terms of terrain, combat power, and morale. Naturally, this cry for sanity, which was only the latest in my long history of pleas to liberals to avoid the kind of civil strife I witnessed the consequences of overseas, was greeted by a torrent of outright lies. “You are advocating a civil war blah blah blah blah.” All liberal bull Schiff, including some by shameful collaborationist Fredocons who should know better, but not at all unexpected. The modern liberals’ rhetorical toolbox is filled exclusively with lies, which has the effect of making actual reasoned discussion impossible. Of course, that is their goal – they don’t want to defeat your argument. They want you bullied into silence. Tellingly, no one even bothered to try and counter the indisputable facts I offered many times showing why liberals will fail if they choose violence – instead, they tried to shut me up.

Michael Moore chance. As I have shown before, they dream of an America where they can crush all dissent from their orthodoxy, and I’m not playing that.

They want to silence you too, and every other patriot. But that’s a short-sighted tactic because people who are silenced, particularly uppity Americans who take their natural rights seriously, won’t just shrug and give up. They will stew and fume at the injustice of their oppression and then they will radicalize and then, because they have been wrongfully denied access to the means of participation in the governance of their own society, they will inevitably exercise their power in the only way left to them. They will rebel. They have before. Sometimes it’s peaceful – like by electing Donald Trump. But if peaceful doesn’t work, they are going to give not being peaceful a try. That’s just human nature.

This is where the liars pounce again with their fussy fauxtrage – leftists love violence directed at Normal Americans – but facts are facts. If the liberal plan to drive non-liberal Americans from the public square – the NRA, Laura Ingraham, and even Kevin Williamson silencing campaigns are just some recent examples – succeeds, it will only succeed for a little while. The fact is that if Normal people are barred from “legitimate” participation, they will participate “illegitimately.” Just ask the redcoats how taxation without representation worked out.

Here’s a hint: We Americans have good teeth and don’t eat spotted dick.

But the liberal campaign plan hand waves away that whole unwillingness to be disenfranchised thing by announcing that this new “civil war” to totally disenfranchise half of America will be bloodless. Good – I’m all for bloodless – but did they ask the people they intend to disenfranchise about that? Because, as liberals love to point out when excusing urban mobs that riot and burn down their own neighborhoods because of real or imagined grievances, people don’t always choose to be peaceful when they are confronted by what they perceive as systemic injustice.

Systemic injustice is, of course, exactly what the liberals are proposing. They want to impose the traditional leftist governing mode of “one man, one vote, one time” on all of America, and cite California as a shining example of our future. According to the article, not coincidentally written in a state where recreational weed is now legal, California is “a thriving work in progress that gives hope that America can pull out of the political mess we’re in.” But there are problems with using California as a role model, starting with the fact that California sucks.

Oh, it doesn’t suck for rich guys living by the beach like Jack and his hipster buddies. California is pretty great for bros like him. But the guys who cut his lawn and wash his Tesla and feed his pet pandas, well, not so much. The article claims, “California Democrats actually cared about average citizens.” Yeah, uh huh. Drive 10 miles inland from the beach and California dreamin’ becomes California nightmarin’.

California is a bankrupt failed state that is essentially Illinois with palm trees and better weather. Outside the coastal urban enclaves where Jack and his pals mingle, drinking kombucha and apologizing for their white privilege to their baffled servants, it’s a crowded, decaying disaster. Bums wander the streets, littering the sidewalks with human waste. Crime is rising. Illegal aliens abound, more welcome in the Golden State than actual Americans. California is an example all right, but a cautionary one.

So how did California go from conservative in the 80s to the blue hellhole it is today? The leftist zillionaires and the Democrat government unions bought the elections. It also got so expensive and so crowded here that a lot of the kind of people who made California red and not terrible moved away. Now you have a relatively small elite of really rich liberal jerks, and a large class of serfs to the Democrat welfare state – many imported for their delightful obedience and complacency – but no more huge middle class of Normals. Those Normals went east, toward opportunity.

The liberal plan for civil war does not take into account how prosperous states like Texas went hard right in the 90s and show no sign of changing colors, and there is no mention of how Republicans hold more elected offices today than at any time in history. Well, as any successful general knows, when faced with unpleasant realities you ignore them and hope it all somehow works out.

In the end, the “civil war” is going to be won, according to the warplan for Operation CARACAS REDUX, when America just sort of opts to be like Cali and elects all Democrats. Why would it do that? That part remains unclear. Part of it is because it is obvious that Democrats care so much more for the workin’ man, but apparently no one asked the workin’ men because the workin’ man voted for The Donald.  Also, people really care that the weather in a century might be slightly warmer, so there’s that. None of these are really good reasons. Their warplan seems to be, “Wish hard, and it will be so.”

But it won’t be so. Normal Americans are not going to simply give up their rights and their self-determination because a bunch of liberals want them to. Sure, the weaponization of culture with corporations and tech companies trying to silence and marginalize decent citizens is troubling, but in short order there will be a backlash as Normals react to these new, overtly fascist tactics.

A much more realistic scenario is the country splitting apart, probably with some level of violence. That’s not a wish, though that won’t stop the liberal liars from claiming it is. Ignore what they say and watch what they do. Liberals are repudiating the entire idea of rights and democracy in favor of an ideology that embraces their own elite rule by decree. That they admit that it is impossible to reconcile our rights and our self-determination with their lust for unchallenged power is the one accurate thing in the liberal “civil war” game plan.

They are correct when they say “[i]n this current period of American politics, at this juncture in our history, there’s no way that a bipartisan path provides the way forward.” Yep, true. They are also correct when they observe that, “America today does exhibit some of the core elements that move a society from what normally is the process of working out political differences toward the slippery slope of civil war.” Yep, also true, and it ought to scare the hell out of them.

If the liberals ever get their wish for a new civil war, my money is on the side with all the guns.