Talk to Mueller? No, Trump Should Use His Bully Pulpit to Expose Mueller's Corruption

Kurt Schlichter
|
Posted: Apr 12, 2018 12:01 AM
Share   Tweet
The opinions expressed by columnists are their own and do not necessarily represent the views of Townhall.com. 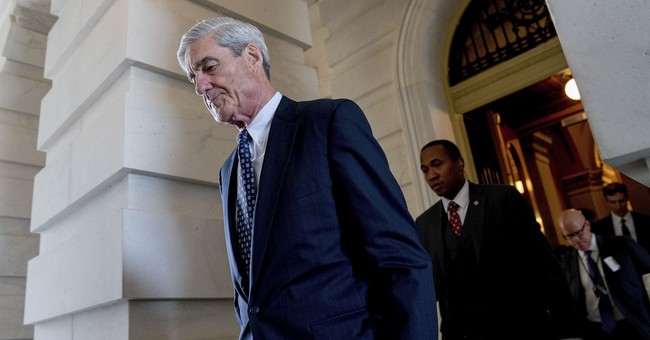 There is no way to sugarcoat it – especially after the lawless invasion of the attorney-client privilege by fancy-suited thugs, if President Donald Trump sits down and talks to Robert Mueller and his pack of Democrat donor corruptocrats, he’s an idiot.

Instead, he needs to take his case to the people – because a blind man can see that he’s being framed.

If Trump talks to Mueller, Mueller will be laughing at him, but on the inside. On the outside, he’ll keep up that beaten beagle visage of his, roaring at how he outsmarted the man who outsmarted all the Smartest People in the World and who therefore assumes he can somehow “win” his interview.

But Trump can’t win. The fix is in. Raiding Michael Cohen’s office was the icing on an all-icing cake. This is not justice. This is an attempt to claw back power for the disenfranchised elite no matter what it takes, and no one – not the president, not me, and not you, should pretend these hacks deserve any deference or respect.

Trump committed no crime, as we all know because nothing indicating he has committed a crime has leaked out of that unprofessional sieve masquerading as a bunch of professional prosecutors that Mueller assembled to do the bidding of his elite masters to both overturn the result of the 2016 election and avenge his humiliated pal James Comey. The recent report that Trump is not the “target” of an investigation should not lull anyone into complacency – it’s just another flurry in this special counsel’s blizzard of lies.

Donald Trump is their target, though they absolutely and unequivocally know he committed no crime. They don’t care.

It’s not the truth that Donald Trump has to worry about. It’s the lies. Mueller and his pack of Hillary hitmen will not hesitate, not for a second, to manufacture a crime if that’s what it takes. Think of them as all being just as honest as fired FBI bigwig Andrew McCabe, then decide if that makes you more or less confident about the process.

The FBI’s anti-Trump hate texts by its “nonpartisan public servants,” the DoJ’s continued obstruction of the investigation into its misconduct, the leaks and the lies – it is all part and parcel of the real scandal. A bunch of leftist bureaucrats got mad that Donald Trump beat Felonia Milhous von Pantsuit, denying them the sinecures she would have granted them in gratitude for covering up her myriad crimes, and decided to frame the man the American people elected.

This is not justice. This is a coup by sore losers.

And this proposed interview is not about winding up the investigation – the “investigation” charade will go on forever until Trump finally fires that inexplicably gimpy disappointment Jeff Sessions and puts Scott Pruitt into the AG vacancy to steam clean the outhouse that is our Department of Justice. The “wrap it up” bait is just Mueller’s minions lying again in an effort to sucker Trump in.

“Gosh, if we can just interview you then we can finally finish this up. Really. Honest. Cross my heart, hope you die. I mean ‘to die.’ To die.”

What a load of Adam Schiff. Sheesh, when that nitwit stops babbling about Trump/Russia, you know it’s a dry hole.

Mueller’s only goal in this interview is to trick Trump into some innocuous inconsistency that he and his thugs can spin into perjury. But even if Trump doesn’t say anything incriminating, there is absolutely zero evidence to support the naive belief that these political hatchet men won’t just invent something. What about their behavior in this pseudo-legal abomination has provided you any evidence supporting the naïve notion that these people would hesitate to frame their quarry?

Harsh? Not as harsh as the treatment of far too many American citizens by out-of-control federal prosecutors who didn’t let mere innocence deter them from claiming their trophies.

Ask Ted Stevens’s family about the DoJ’s corruption and lies.

Ask Frank Quattrone about the DoJ’s corruption and lies.

Ask Cliven Bundy about the DoJ’s corruption and lies.

President Trump needs to get on the phone and call someone like retired federal Judge Stephen Larson out here in California (I do not know him personally, only by reputation). The president needs someone far from the stench of the swamp as his new lawyer. Since getting off the bench, Larson has made a career getting railroaded clients off from charges brought by overzealous government prosecutors in state and federal white collar cases. That’s the firepower the president needs – and far too many top lawyers back in Swampland are either legitimately conflicted out, or want him convicted, or are simply too scared to do the job.

This is not a game. And this is more than about just one man. These kangaroo court shenanigans are designed to use fear of prosecution to permanently lock out of office anyone the elite disapproves of – and to lock in their unchallenged, unquestioned control of the reins of power. The potential consequences are much worse than just impeachment – this kind of attack on the rule of law is at the top of a slippery slope that can end with a nation split apart and even embroiled in civil conflict. Liberals are already fantasizing about winning a new “civil war.”

It’s time to get serious. There’s no upside to playing footsie with these demonstrably partisan prosecutors. Trump is never, ever going to convince Mueller and his mob that he should be exonerated. That will never happen.

As I tell my clients as I prepare them for deposition, “You are going to lose this depo.” I am always right. No one ever wins when being cross-examined.

Never, ever speak to the people who can put you in jail. No. One. Ever. Wins.

At best, through preparation, you just lose less. But you never win because they always get something they want from you. Trump faces a team of trained prosecutors who are not guided by ethics or checked by any kind of restraint. They have already trampled his attorney-client privilege. One must, in an abundance of caution, assume that they will lie, cheat, mislead, and perjure themselves if that is what it takes to attain their sole goal – Trump’s impeachment and, perhaps, criminal conviction.

Doing an interview is fighting on their ground, where they control the outcome. Instead, the president should fight on his ground. The Mueller hit squad is an ethical nightmare, and when people hear the facts they instinctively know it’s a set-up and a sham. He should talk about that. He should tweet about that. A lot.

Mueller’s team is all Democrats and Hillary donors. Come on, Bobby, name one – just one – of your prosecutors who gave a dime to the Trump campaign. Just one.

Mueller is the bestest buddy ever with leaky Jim Comey. Is it right to be heading an investigation where your buddy – who may have committed a crime – is the star witness? Hell no.

The whole thing stinks, and everyone can smell it. You don’t need a law degree to see this is a set-up.

Use the bully pulpit to beat them to a pulp.

Let Mueller spin his wheels a while longer, getting his occasional chickenscratch process crime plea from people we never heard of. The exception is the disgraceful persecution of General Mike Flynn – Trump should announce that if Andrew McCabe is not being charged with perjury, he will pardon General Flynn in order to ensure equal justice.

Mueller has nothing. Trump should not hand him something.

Sit for an interview? Hell no. Instead of playing by Mueller’s rules, the president should make Mueller play by his.