Looking Back On How Donald Trump Beat Hillary Clinton

Kurt Schlichter
|
Posted: May 02, 2016 12:01 AM
Share   Tweet
The opinions expressed by columnists are their own and do not necessarily represent the views of Townhall.com. 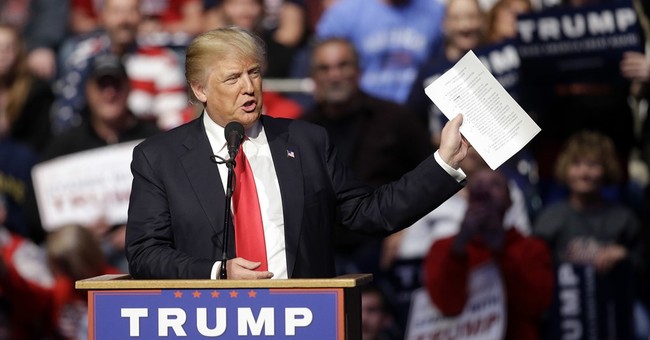 Ted Cruz can and should be the Republican nominee. But if the GOP decides to nominate Donald Trump, the conventional wisdom about Hillary Clinton turning this election into “Mondale II: The Orangeing” could be very, very wrong…

Looking back 25 years ago to the election of 2016, it is clear that Clinton’s campaign team was badly mistaken when it thought that the vast middle of American politics would blame the Republicans for the violence outside the convention. Every pinko, commie, and socialist freak with a cause and a Soros subsidy descended upon Cleveland, and the ensuing chaos was supposed to show that Donald Trump brought violence and disorder in his wake. The Democrat lovefest to follow was supposed to provide a stark contrast, with Hillary bringing peace and blessed calm. But Americans didn’t see it that way.

In 1968, the Democrats showed themselves incapable of maintaining order in a Democrat city with a Democrat president. This time, it was a Democrat city and a Democrat president allowing their allies to violently assault their political opponents. “The cops, I love the Cleveland cops, but the mayor, the Democrat mayor of Cleveland, a very bad mayor, is ordering them to stand down,” shouted the nominee during his extemporaneous nomination speech. “Just like Benghazi! What is it with Democrats telling our beautiful military and cops to always stand down? Sad!” Of course, Trump had no evidence of any such order, but it sounded like it might be true and that was enough.

The crowd went wild, even those disgusted by Trump’s myriad character flaws and jumbled policy positions. The violent hordes of shrieking creeps outside, many waving Mexico’s flag and some burning America’s, had largely united the party. A few principled conservatives could never bring themselves to back the nominee, but the stark choice the left helpfully provided in Cleveland minimized the effect of the #NeverTrump movement. These patriots would sit out the presidential portion of the election, but do yeoman work on downticket races. History would show that their choice to focus on rebuilding conservatism in the wake of Trump would pay off in future election victories for true heirs of Ronald Reagan.

The media was baffled, and Clinton terrified, when Trump roared out of the convention averaging just three points back in the polls – 45 to 42. The networks’ wall-to-wall coverage of the chaos in Cleveland was supposed to bury Trump, but instead he had used that bully pulpit to show one thing she couldn’t: Toughness in the face of progressive thugs. The Democrats tried to intimidate him, and he scoffed: “Those losers outside, with their Mexican flags and their signs, their very stupid signs, those are Hillary’s people. They’re her voters!” Trump yelled. “The wall, it’s now 30 feet tall! And believe me, those bums outside, they’re going to help Mexico pay for it! Sad!”

Clinton prepared to fall back on the old Democrat playbook, getting ready to unleash her massive war chest on Trump via a tsunami of negative ads. But her savviest advisors risked her wrath by bringing up several problems. The first was that Trump’s negatives were largely baked-in already, and just like the GOP had a legislative wave election in 2014 while it was polling on par with syphilis, Trump’s unfavorables did not correlate with the number of people who might hold their noses and vote for him. Moreover, the voters were now paying attention and when they actually heard Trump talk, as opposed to hearing about his gaffes, the more they liked him – his “America First” rhetoric resonated. And worse, the map had changed – in 2012 it was easy to identify the swing states. But now with Trump, reliably blue states like Michigan and Pennsylvania were wavering, while reliably red states like Utah and Mississippi presented opportunities.

Hillary’s billion dollars were not quite so decisive when they had to be spread across 20 states instead of seven. Trump’s fundraising was a fraction of Romney’s haul, and he certainly wasn’t going to spend much of his own money on this lark, so he kept up his constant rotation of TV appearances and rallies. The mainstream media was unable to resist – Trump made news every time he went on camera, and when CBS decided to take the high road and stop booking him its competitors eagerly picked up the slack. The boycott lasted five days. Trump’s rallies likewise drew leftist thugs, whose violent antics the networks had to cover along with Trump’s stock response: “They sure hate us, those Hillary voters out there. Think of what happens if they get in charge. It’ll be a crime to fly an American flag anymore! Sad!”

Hillary tried to compete using free media, but her condescending, bitter demeanor made her a ratings albatross. And Trump bored right in: “No one’s watching her. Really, look at her. She’s like a first wife. Nag, nag, nag. No, seriously, I love my first wife, and my second, but really, no one wants to hear Hillary’s complaining. Can you imagine four years of this, of her in the White House nagging us for four years? Naggin’ Hillary! And Crooked Hillary! Naggin’, crooked Hillary! Sad!” That was in August. By then the polls were effectively tied.

Trump took advantage of his own novelty, giving the impression that his campaign was an exciting movement in contrast to the dreary trudge that was Hillary’s. He went hard for Sanders supporters, not getting many but getting a few Hillary could not afford to lose. On campus, a Trump shirt or hat became a powerful middle finger to the social justice warriors most students detested. Singers and actors came out for Trump. “We liked him because he had swagger,” Governor Justin Bieber (R-CA) recalls. Trump became a symbol of rebellion against the whiny nanny state that was America’s culture.

Trump also frustrated Clinton by using black and Hispanic celebrities to reach out to those communities. “Look, if you are a black person, Hillary is very, very bad for you,” Trump said onstage at a rally in Detroit, surrounded by black sports and rap stars. “See what the Democrats have done to this great town? She wants to do a trade deal with China, a very bad deal! Does that bring jobs back to Detroit? Does letting in millions of illegals bring jobs back to Detroit? Sad!” He then added: “Believe me, some of my very best friends are black people!” Trump would win 21% of African-American voters, which would be decisive in several races.

When the Department of Justice shocked no one by refusing to indict Hillary, Trump was on it: “I talked to many, many military people who tell me this is a scandal, a disgrace. If you or I did what Hillary did we’d be in jail so fast…but this is how it works in D.C. If you are connected like Hillary, part of the establishment, you have special rules. Sad!”

He touched a nerve. “No special treatment for bigshots! That’s not right and I’ll stop it!” he promised. It was then that Trump pulled slightly ahead, though within the margin of error.

Hillary initially refused to debate Trump. “I will not give a platform to his kind of sexist hate speech,” she intoned, and Trump pounced.

“I used to call her Crooked Hillary, which she is, and Naggin’ Hillary, and she’s still naggy, believe me, she nags us all the time! But now I call her Scared Hillary because she’s scared of me. And if she’s scared of me, how is she going to stand up to the very bad people out there and protect America? I mean, I wish she had been Scared Hillary back when she voted to invade Iraq, which was a disaster. But we can’t have our wonderful military under someone who is so scared. We need someone who’ll stand up and defend our country, which she is scared to do. Sad!”

Hillary finally agreed to a debate, and it was a disaster. She was prim, prepared, and utterly stiff while Trump was loose, limber, and lacerating. She called him sexist, and he went for the throat: “I love women, not like your husband did, which was very shameful and which you tolerated. And a lot of young people who weren’t around then don’t know about how you covered up when Bill behaved very badly to women but when they learn about it it’s going to be very bad for you because you were very bad to the women. And everyone knows if you weren’t a woman you wouldn’t even be here. Sad!”

Later, in an exchange on global warming, Trump made one of the comments that was supposed to be a campaign-ender and instead it simply slid off him: “I don’t know if there is global warming but I’ll tell you I like the idea of global warming because when it’s warmer beautiful women wear bikinis and we all enjoy that, but then some women who shouldn’t might wear them too.” He was staring at Hillary as he spoke the last clause.

But Trump’s victory was not merely a matter of him talking. The behind the scenes logistical work was key. Trump’s team inherited the GOP’s revamped data operation, and our current Chief Justice Ted Cruz turned his own crack team of number crunchers and media gurus over as well. They separately targeted and motivated pro-Trump voters, reluctant but persuadable ones, and vulnerable Democrats. They even tried to convince the #NeverTrump people they identified through datamining social media; that initiative went poorly. Over a million voters wrote in Ted Cruz.

Trump also negated the potential for internet giants like Google, Facebook, and Twitter to interfere: “Some people are saying that internet companies might be helping Hillary, and let me tell you, I have a long memory and they should stay out of this election because if they don’t stop me then I will remember and there will be a very heavy price they will have to pay if they interfere, believe me. They will be sad! Sad!”

The two October ISIS attacks on American shopping malls in Pittsburg and Alexandria pushed Trump ahead 48-43, especially after it was revealed that the machine guns that had killed 25 U.S. citizens had been smuggled in from Tijuana. This undercut Hillary’s immediate pivot to gun control – something her internal polling told her had already been weighing her down in the Rust Belt – and again Trump was at her: “Hillary, who still won’t say the words ‘Islamic terrorism,’ wants to take away your guns and leave you defenseless when these guns come from Mexico. That’s crazy! She won’t build a wall to protect you, and she won’t let you protect yourselves. But she has many, many guards with guns, you know. Instead of registering our guns, how about we register Muslims? Sad!”

The mainstream media hoped this latest gaffe would stop Trump’s momentum; his supporters merely shrugged. “Trump is just being Trump,” one young woman who had previously been for Sanders told a CNN correspondent. “What I care about is not being gunned down shopping at Nordstrom, and I don’t think Hillary will protect us.”

When Pennsylvania was called for Trump, Hillary was on her second bourbon. When Ohio went red, her consultants ran up to Bill’s suite and pulled him off an eager blonde campaign staffer to have him come downstairs and pry the bottle out of Hillary’s clutches. They hoped to keep her from completely embarrassing herself during her concession speech.