Kurt Schlichter
|
Posted: Jan 25, 2016 12:01 AM
Share   Tweet
The opinions expressed by columnists are their own and do not necessarily represent the views of Townhall.com. 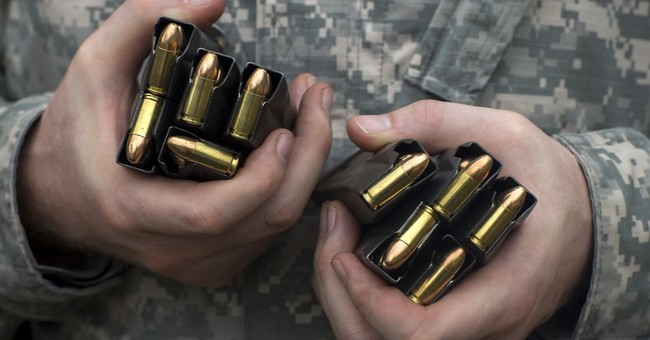 I have never, ever had anyone tell me that he had too much ammunition.  Not in a combat zone, not in a civil disaster, not even in peacetime.  Never.  Nor have I lived through a time where our governing class was so deeply corrupt, so utterly foolish, and so dangerously focused on the perpetuation of its own power that it risked bringing down everything we have built not merely in the United States but in the entire West.

Right now, if you are watching the news, you have questions about the future.  And the answer to all of them is to buy ammo.

Buying ammo is a no-lose proposition.  Look, the worst thing that happens if you buy more ammo is that you have more ammo.  Plus, much of our consumer ammo is made by hardworking Americans, and many of those ammo makers are located in red states where the right to keep and bear arms is celebrated and respected.  So you’re helping fellow conservative Americans, which is good.  And you’re infuriating people like that sanctimonious, Second Amendment-hating incompetent infesting the White House, which is great.

Of course, buying ammo presumes you have already fulfilled your duty as a law-abiding, able-bodied American citizen and obtained sufficient firearms for the defense of yourself, your family, your community, and your Constitution.  I can’t tell you how many people in the last year have confessed to me that they have finally decided to visit their local gun seller to do what they had put off for far too long and transition from sheep to sheepdog.

A handgun and a long weapon per adult is merely the minimum.  We call that “a good start.”  Now, while you can really efficiently carry only two weapons at once, when all hell breaks loose you’re going to have friends who were the grasshopper to your ant and did not prepare for winter.  You may wish to share the contents of your armory with them when the time comes; keep in mind that the only thing in a gunfight that’s better than having a black combat rifle is having your buddy there to provide supporting fire with a black combat rifle.

Or a shotgun – diversity is a good thing.

Don’t forget training.  Malpractice with a weapon is a bad thing, particularly when the foolishness of our leaders has led to the kind of chaos where hospitals are deserted and antibiotics are hard to come by.  I oversaw the weapons training of at least 20,000 troops over my career (Sergeants actually do the training; officers oversee the planning, resourcing, and big picture range operations, then find their sharpest sergeant to run them through some refresher drills so they can shoot “Expert” when they hit the firing line and qualify in front of everyone).  I am a big fan of weapons training.  You need to learn safety, and you also need to learn how to hit what you are shooting at.  Don’t be like the gangbanging, side-shooting nimrods in Democrat inner cities who can’t hit the other scumbags they’re shooting at and instead take out nice ladies walking home from church.  Having lots of ammo on hand facilitates training.

Now, many of our urban liberal friends will not understand why we insist on ensuring that we have plenty of guns and ammo.  They are, not coincidentally, the same urban liberals who don’t understand how creating economic and political chaos by screwing up the economy, coddling crooks, allowing unrestricted immigration, refusing to defeat our enemies, and frittering away the rule of law all act to undermine this wonderful island of relative peace and stability we call the United States.  The über-beta editor of a well-known liberal website once chided me on Twitter for pointing out the fact that civilization walks on a tightrope over a chasm of chaos, telling me I was essentially nuts for thinking this could all fall apart much faster and much more violently than any of us imagine.  But I was not nuts.  I was remembering.  I was remembering Los Angeles on fire during the Rodney King riots.  I spent three weeks on the streets with the Army during that little life lesson based out of an armory south of I-10 and east of the 405.  Let’s just say that it was a looty, shooty area.  So I don’t need chaos lessons from some tweedy femboy, nor do you.  It may not be apocalypse now, but it could very well be apocalypse soon.

Do you think our elite is going to protect you during the next “uprising?”  Remember, it’s a “riot” only if elite liberals are at risk like they were when Beverly Hills got threatened; it’s an “uprising” if only you are.  Remember that “stand down” order in Baltimore?

Do you think the Iranians and our other enemies haven’t been watching Team Feckless in inaction and thought about popping off a hot rock or two a hundred miles above Kansas City to fry all our wonderful electronic gizmos with EMP?  A couple days after our logistics networks go down those urban hipsters are going to learn what really constitutes a “food desert.”

Do you think a country this politically divided can’t devolve into violence?  People in Kosovo were pretty sure everything was hunky dory while Tito was alive.  People resolved their differences through the institutions.  And then Tito died, and the game changed.  In just a few years, it became very bad.

Right now we have a president who thinks he can ignore or modify the law unilaterally, justifying it with the baffling argument that he shouldn’t have to ask Congress because Congress will just say “No” – which I always thought was kind of the point of checks and balances.   So what happens when President Clinton, who identified you and me and the 50% of Americans who aren’t her supporters as her enemies, decides she gets to make her own laws because, well, she knows better and feels like it?  Nothing good.

But deterrence is a wonderful thing.  An armed, trained populace is not only prepared for when things go bad, but the fact that it is armed and trained makes it much less likely that things will go bad in the first place.  Last year, Americans voted for liberty by buying well over 15 million new guns.  That’s roughly 40,000 a day, every day.  That’s enough to arm three infantry divisions.