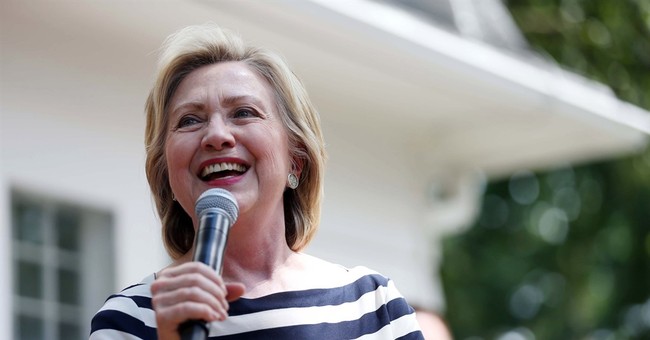 “And to President Clinton,” President Abbot said into the camera, “I ask that you stop your threats of war and allow the Free States of America to separate in peace, and let our two nations remain brothers instead of enemies. Goodnight, and God bless all Americans.”

“Arrrgh!” shrieked Hillary, heaving her tumbler at the Oval Office big screen. The empty glass missed, hitting a bust of Saul Alinsky on the mantle. It smashed into a cloud of shards and ice; She certainly didn’t let any of her Macallan Lalique whisky go to waste.

Her entourage cringed – they hadn’t seen Her so mad since She made a surprise visit to Chappaqua and found a wrinkly Bill eating a Big Mac in the bubbling hot tub with a 19 year-old blonde CW actress, Chelsea’s bustiest bridesmaid, and that chick who carried a mattress around because of patriarchy.

“They think they’re going to secede, huh? Well, call my generals, because this means war!”

Now, the two dozen conservative states that had seceded a week ago had done it quickly, peacefully and reluctantly. After Hillary’s hand-picked Supreme Court majority started upholding her flurry of executive orders – she didn’t bother with legislation anymore – there seemed no other choice. First, it was the newly discovered “right to environmental justice” that required a ban on fracking and the imposition of climate change regulations that threatened to bankrupt middle-America. Next, it announced a right to state-funded abortions at any time until the baby leaves the hospital. Then there was the discovery of exceptions to the First Amendment that allowed Her to ban critiques of Planned Parenthood (“There is no right to advocate anti-woman ideas!”), demands for stricter immigration laws (“There is no right to advocate against anti-undocumented workers!”), and criticism of Hillary Herself (“This dissent is unpatriotic!”).

But the boulder that broke the camel’s back was Hillary’s unilateral ban on the private ownership of guns (“We must protect the children! I mean, ones that have been born. And left the hospital. Those children only. Not others.”). The governors of the primarily Southern and Midwestern states of what would become the Free States secretly met, planned, and acted. The big issue was securing the military installations on seceding soil; there was no siege of Fort Sumter this time. Most of the commanders of those bases, and most of their troops, hailed from the Free States. They joined the new nation’s military, which served under the same Constitution (though interpreted accordingly to its text, not liberal necessity) and under the same flag (though with about half as many stars).

The new Joint Chiefs trembled at the situation room table as Hillary screamed at them. “Why the hell are we spending all this money on you!” she howled. Actually, that was untrue – most military units were classified as “Unfit for Combat Operations” due to the budget cuts necessary to fund Hillary’s entitlement programs.

“Madame President, it’s not that simple,” said the new Army Chief of Staff, who had been appointed because of her courage in becoming the military’s first transgender general officer. Back during the wars, when she was still called “Mike,” she had avoided deployment as head of the Army’s diversity initiative.

“Seems pretty simple to me,” Hillary retorted, pausing to take a hard swig from her “water” bottle. “You gather some Army guys together AND GO GET ME MY COUNTRY BACK!”

The generals left quickly, none of them willing to explain to the President that when half the country went away, 75% of the military went away to go with it. And those who remained were hardly the cream of the crop.

Lieutenant Colonel Myron Putney had been a self-described “Army strategist” who served among the herd of majors on the staffs of various divisions around the Army. He considered his personal liberalism a mark of distinction from the knuckledraggers he worked with and looked down upon; while they were out in the field leading mere soldiers, he was wielding real influence drafting position papers.

Now those Neanderthals were mostly gone, and he was finally in command of an infantry battalion. He had held a company command job once, but that lasted only two months before that unsophisticated ape Colonel Reisman relieved him, saying “I’m only saving your sorry fourth point of contact by pulling you out of command because I don’t want to have to do the paperwork when your troops frag you.”

Lieutenant Colonel Putney – he had been a major with no hope of promotion just the day before – surveyed his new unit, mostly filled with new recruits from northern cities and universities who volunteered after a massive mainstream media propaganda campaign. Many were women who, on average, could do more push-ups than the males.

Because of the “Inclusive Army’s” new regulations, there were a lot of unusual hairstyles and beard choices in the formation. One neckbearded guy, who had been inspired to join the war effort by The Daily Show (again hosted by Jon Stewart, but now showing on NBC in primetime), raised his soft hand.

“Uh, how long is this training today cuz I have a thing tonight I totally have to go to? It’s this open mic reading where we take the ideas we’ve been journaling and share them, accompanied by a squeezebox and a lute. Mine’s about how being male-identified makes me sad.”

“Uh,” replied the colonel. Another hand went up. “Yes?”

“Yeah, I was at lunch today and there was totally, like, no vegan alternative. Plus nothing seemed artisanal or locally sourced, and I felt my dietary needs were being marginalized.”

“Look, we are going to fight these southern racists, so we need to do some weapons training!” the commander shouted.

Another hand: “I don’t really believe in guns. Plus, this seems like kind of a patriarchal power structure here. I don’t see a lot of hearing of the voices of womyn, or trans and questioning people.”

Throughout the Old America, the military struggled to build combat units for the campaign to retake the Free States. Hillary adamantly refused to impose a draft and the initial wave of volunteers quickly soured on the experience when they found out it was going to be hard.

“Wait, they’re going to shoot at us?” one private asked LTC Putney. “They can’t do that. They shouldn’t be allowed to do that.”

“Right! And we’re the ones who are going to stop them.”

“No, I mean someone should stop them because it’s illegal. Maybe the police or something?”

A month later, LTC Putney’s battalion (scraped together from the remainders of five battalions) was on the border of Tennessee, preparing to invade the Free States. He was proud of the unit’s progress, especially after that unpleasantness involving a drunk female’s regret over a romantic encounter that led to a five-day pause in tactical training to address the pervasive rape culture within Hillary’s army. And then the general called him and directed him to go under a flag of truce as his representative to meet with the other side.

Putney was stunned to see his counterpart was the very same colonel who had relieved him years before, now chief of staff of a division in the Free States Army. “Sheesh, you?” sneered Colonel Reisman. “I should have known you’d be involved in that clusterfark.”

Puffing himself up to his maximum height, 5’9”, Putney replied: “I’m here to inform you that you are guilty of treason and on behalf of the President of the United States, I demand your surrender!”

“Listen up, Half Step,” replied Colonel Reisman. “I’ve had 19 Delta scouts watching that circus you call an army for the last month. You have no intel, you have no logistics, and you have no artillery that can get rounds to its guns, much less put them on target. You aren’t even a soup sandwich. You’re barely a piss biscuit.”

“Stop talking. It’s been fun and games up to now, but this freak show stops here. We’re going to shake hands and everyone is going away happy back to Fort Living Room. See, across this line is our home. I have three heavy brigade combat teams ready to counterattack the second we see hostile intent. I have three supporting brigades of artillery, including MLRS, sited in on your axis of advance. You guys turn around, go back to your dorm rooms and coffee houses, and it’s all good. But you come into our home with guns with intent to do violence and we will teach you and your little task force of whiny little hipsters, femboys, and commies what killing really is. Do you read me? Now get the hell out of my sight.”

And so, the Second Civil War never happened. When a particularly brave reporter later asked a wobbly Hillary Clinton about why she failed to save the Union as Abraham Lincoln had done, she muttered something about “sexist questions” and how “all lives matter” before staggering away from the podium and back into the bowels of the White House.