Liberals Panic As They Lose the Gun Narrative 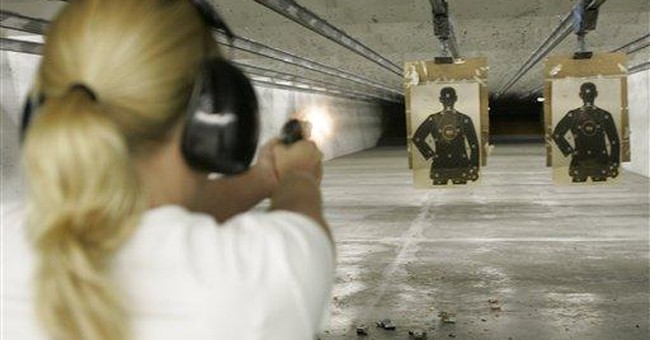 Trending
When you argue for a living, you can tell how an argument is going for you. The evidence and my gut both tell me that the liberals have lost control of the gun control narrative.

Not for lack of trying – it was almost as if they were poised to leap into action across the political, media and cultural spectrum the second the next semi-human creep shot up another “gun free zone.” This was their big opening to shift the debate and now it’s closing. They’ve lost, and they are going nuts.

The evidence is all around that this is not going to be the moment where America begins a slide into disarmed submission through an endless series of ever-harsher “reasonable restrictions” on our fundamental rights. You just have to look past the shrieking media harpies to see what’s really happening.

Let’s start with the most obvious omen that this tsunami has peaked. President Obama thrilled his base by grandstanding at the memorial, and then promptly washed his hands of it by handing it over to a “blue ribbon commission.” Making Joe Biden its chairman was like staking a vampire through the heart, then hosing him down with holy water before burying his body beneath the Gilroy Garlic Festival.

Why does Obama want this gun thing buried? While intensely popular with metrosexual pundits, coastal liberals, and cultural bigots slobbering at the opportunity to stick it to those banjo –strummin’, God-believers out in the hinterlands, gun control remains poison to Red State Democrats.

Joe Manchin of West Virginia couldn’t resist some sanctimonious posturing, but clearly he heard enough from his constituents to sprint-back his heresy with a WaPo op-ed explaining how awesome the NRA is and how groovy gun owners are. He will never take sides against the family again.

We didn’t see the Red State Democrats up for re-election in two years out dumping on their constituents to please the media. Call it “the Fredo Effect,” and 2014 is the rowboat. We won’t hear from the likes of Senators Landrieu, Pryor and Begich until they vote “No.”

Sure, Senator Feinstein will submit her gun ban wish list to Harry Reid, who will look at it sagely, nod politely, and let it die. He’s more Tom Hagen than Fredo. He is going to retain the NRA “A” rating his website proudly showcases regardless of what Chuck Schumer thinks. What gets you hosannas in Manhattan gets you unemployed in Searchlight.

Their post-Newtown strategy was always to prevent an effective response from the pro-gun freedom side by both rapid action and by demonization. But the holidays and the kabuki theater that is the fiscal cliff drama meant that legislative action, their Holy Grail, would have to wait. That gave people time to think and the gun freedom side the time to react.

Demonizing those who support gun freedom was always intended as a weapon to silence them. It was also critical that we, law-abiding gun owners, become the Other. By dehumanizing us and painting us as evil, it is that much easier to strip us of our rights.

But gun freedom advocates fought back. Using the mainstream media, conservative media and especially social media – we need to understand its huge significance here – gun freedom advocates countered liberals’ bogus “facts.” Media reports about “automatic” weapons were corrected, clownish statements about “high caliber magazines” and “large capacity round” were mocked. The struggle raged over millions of Facebook posts. The average citizen saw gun banners ask “When will America control access to weapons?” and then saw several experts among his or her friends post about the significant hurdles one needs to get over to get a gun. Truth bypassed the mainstream media and became a weapon for the side of fundamental rights.

The banners overplayed their hand, losing credibility with every distortion, evasion and smear. The cries of “Blood is on your hands!” failed to resonate – reasonable Americans just did not blame the actions of a single sociopath on millions of their fellow neighbors. And it did not help when third-string celebrities and wizened literary has-beens took to hoping gun rights advocates would be shot for daring to oppose disarmament.

The gun banners also counted on a narrative that portrayed a respect for the Second Amendment. They sought only “reasonable restrictions” – why, no one wants to ban or confiscate your guns! The problem was one of memo distribution – not everybody got that memo. Mayor Bloomberg was putting out that what few guns he might graciously deign to leave in the hands of the unworthy would be starved of bullets, while Governor Cuomo acknowledged that confiscation was one of the options.

Oops. “Gun control” is a process that is designed and intended to lead to a total gun ban, and the banners are counting on people not realizing it.

Their credibility and motives already in question, the gun banners became vulnerable to a shift in the paradigm from depriving law-abiding citizens of effective defensive weapons to the idea of protecting kids with armed personnel in schools.

Suddenly, the gun banners had to argue two ridiculous positions. The first was that allowing trained educators or police having weapons in schools is a danger. The problem is that people generally like and trust teachers and cops. The second position was even worse, that armed personnel or police are somehow utterly useless against untrained, amateur creeps who seek to confront six-year olds. All over America, millions of parents noted how none of the wealthy gun banners were disbanding their personal security teams and thought, “You know, I think I’d like having a cop around my kid too.”

Frustration at the fact that their argument had not been unquestioningly accepted morphed into faux moral outrage that their opponents had dared offer any alternative proposal at all. E.J. Dionne of the WaPo was a prime example. He had to “grope for words to describe the National Rifle Association’s proposal,” yet he managed to find some: “Absurd, unbelievable, tragic, obscene,” as well as “insane.”

Note that Dionne’s righteous fury does not apply to the armed guards at the Post’s front door, surrounding President Obama, or to anywhere else other than in the vicinity of regular people’s children.

Particularly amusing are the liberals who transform into green eyeshades misers with the public purse when it comes to cops in schools. The folks who can’t spend enough dough on fudge-smeared, patriarchy-challenging performance artists suddenly become thrifty Scotsmen when it comes to doling out a few shillings to put a cop on campus.

Knowing our reputations as proud conservatives – we represent diversity for our liberal friends – a pal of my wife remarked, out of the blue, that “I think my husband and I need to buy guns.” Whoa.

And as third graders sang holiday songs at their pageant while I surveyed the packed, vulnerable room, I blurted out to another mommy that I wished I could legally carry a weapon to protect those kids. And she told me that she wished that I could too. Whoa.