God is Listening, Democrats Are Not 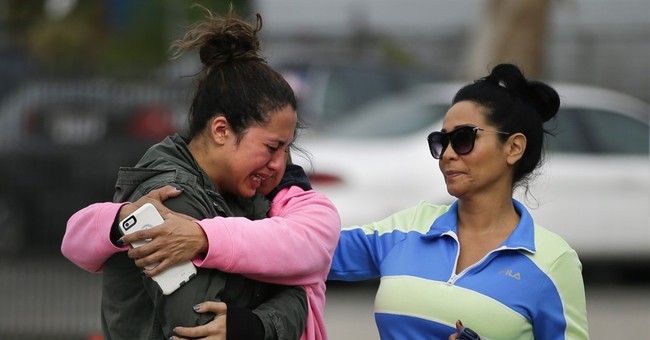 Amidst the chaos of the Wednesday San Bernardino shooting, GOP candidates offered prayers, while President Barack Obama wasted no time politicizing the issue. Both Democrats and Republicans are maintaining their scripts: While Democrats call for increased gun control, Republicans call for prayers.

Rich Schapiro slammed Republicans’ response to this tragedy saying, “Prayers aren’t working.” Meanwhile, Democratic candidates Hilary Clinton, Bernie Sanders, and Martin O’Malley offered no prayers, but rather “solutions.” Unfortunately, Democrats are missing the mark on this one. Republicans are not offering prayers as a solution, but rather as a courtesy to those suffering and as a sign of their faith.

Out of respect for those lost, and the families left behind, Republicans have made efforts to avoid politicizing the tragedy. However, understand that Republican hopefulshave offered solutions to gun violence. The difference between Democratic and Republican solutions rests in the assessment of the problem. No matter the motive, identity of the shooter, setting, or number of victims, Democrats blame the gun. In contrast, Republicans take all the circumstances into account and end up proposing solutions: increased attention to the mentally ill; a crackdown on homegrown terrorism; well-trained armed guards, teachers, and citizens; and more advanced police weaponry.

Unfortunately, the Democratic push for stricter gun laws has been much louder than the Republican opposition. Democrats claim something must be done, and they’re right: Republicans need step up their game, follow through with their propositions, and fight harder to gain the support needed to create and pass legislation that protects freedom and accomplishes their promises.

In times of crisis it is necessary to react, but an emotional, thoughtless response is not the sensible rout. The solution to gun violence is not as simple as Democrats make it seem. Elementary responses to gun violence, such as stricter gun laws, will not solve this problem, because guns are not at fault, people are. We cannot eradicate the 700 million (or so) guns from this country, nor should we. In a quickly shrinking, increasingly dangerous world it is always better to be prepared for the worst and hope for the best. Democrats would rather citizens remain unprepared and simply cower quietly in their homes, with nothing but common pots and pans as a defense against criminals.

Furthermore, Democrats argue that sensible gun laws will curb gun violence, but how much ‘sense’ does sensible reform make? In this fast-paced society we need to slow down and assess the underlying cause of gun violence before “jumping the gun,” and offering an irrational, nonsensical solution.

Catherine Mortensen, the spokeswoman for the National Rifle Association claims, “In the real world, criminals are going to get access to guns.” Thus, in “the real world” stricter gun laws hinder responsible gun owners and do very little to address criminal access to guns. Unfortunately, this theory was proven in November, when 130 people were killed and countless more were injured in the tragic Paris terror attacks.

The Democratic solution sounds nice: no guns, no gun violence. But if you dig a little deeper, you will quickly realize how dangerous this logic is. Assuming those who are on a mission to kill will find a way to do so, I would much prefer to arm myself or be around a responsible gun owner when all hell breaks loose, rather than be in a room where the only people who have guns are the criminals. Those committing these evil crimes are not good, law-abiding people, so stricter laws will not stop them.

Unfortunately, Democrats are taking this approach to every national crisis. All they want to do is lead from behind and respond to national security with emotion rather than logic. Emotions are natural, and addressing them is important, but good leadership requires avoiding an emotional response to crises. We need a leader who is willing to feel, empathize, and pray with America, while leading with strength and wisdom.

Furthermore, stricter gun laws would provide little change with a government that is unwilling to enforce them. We have in place legislation that would diminish gun violence if enforced, but Democratically governed cities have a track record of picking and choosing which laws to follow. A crackdown on gun violence is ineffective if our government refuses to crackdown on the criminals they already know about.

America needs to have an honest conversation about the direction of this nation. We need to look past political correctness, stop muffling speech, and welcome constructive criticism and conversation. Democrats are right to say something must be done, however, at this point in the conversation, prayers and divine intervention might be the only thing that could bring this country together to facilitate a possible solution.