Does The Left Want Us Dead? 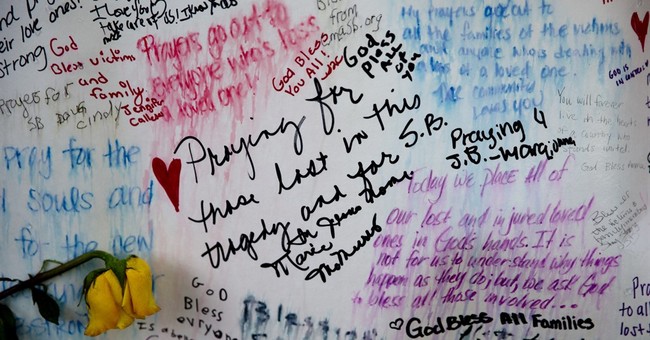 In the days since the deadly attacks in Paris, one thing has been made clear: the political and cultural left in America desire the average American to live with maximum vulnerability towards future terror attacks. They seem oblivious to the natural outcomes of such desires. But they insist that no solution to terrorism or potential terrorism take on an ounce of common sense.

No matter the suggestion, they scoff, condescend and even threaten those who would take even basic precaution—in order to save American bloodshed.

How else do you explain their opposition to the following suggestions?

Arming lawful and law-abiding Americans — There is zero doubt that Syed Farook and his radicalized wife could be persuaded by armed citizenry. In 2012 Farook postponed a planned attack simply because four suspected terrorists in California were apprehended. Farook and his wife Tashfeen Malik’s intentions were to kill as many unarmed Americans as possible. Evidence continues to mount, but it appears they had originally desired to hit a much bigger, more dramatic, and more painful target like a school or church. Resigning themselves to make their big stand with his former co-workers and hoping for the residual damage of killing the first responders that arrived was due in part to the idea that getting caught or getting shot back at weighed heavily on their minds. In both Colorado Springs as well as San Bernardino the absence of people who could shoot back influenced the perpetrators—as do the majority of these shootings, given that close to none of them ever occur in gun friendly zones. Unarmed civilians look like sitting ducks when it comes to those who wish to kill as many of us as possible.

Suspending or at minimum slowing the stream of refugees — In the one month since the Paris attacks the United States has allowed the importation of 237 refugees from Syria. According to reports, 236 of them were Sunni Muslims. Exactly one is a Syrian Christian. Given that Sunni Islam is the strain that produced the terror groups Al Qaeda, Boko Haram, Al Nusra, and ISIS, it may be worthwhile to take a second or third look at those 236 before accepting the vetting process in place by the Obama administration. That process thinks that asking the actual refugee if they are “a terrorist” or have any desire to perform an “act of terror” on America is a sufficient means of vetting a secret killer’s hidden intention. Syrian refugees are especially problematic given that they are arriving here from a nation whose actual records' infrastructure has been destroyed in 6-8 years of civil war and a takeover in some regions by ISIS. Syrian passports are also easy to forge—as multiple reporters have documented—but we also know that ISIS got their hands on a Syrian passport technology that is allowing them to create false passports. When anyone has mentioned slowing the process down, “Islamophobia” is screamed at the top of lungs. But we know that some of the attackers in Paris got there under the “refugee” ruse.

Profiling potential terror activity based on facts —Profiling is always one of those ideas that the politically correct hyperventilate at but there is nothing negative about using certain criteria to screen groups of people. For instance, if we know for a fact that many of the terrorists are from a Sunni Muslim background, let’s allow refugees from Christian, Yezedi, and Shia populations to immigrate first. But since we are allowing Sunnis to come here at a clip of 236 to 1 we might need to take another step forward in our activity to screen them once they are. Along those lines FBI Director Comey this week admitted that Syed Farook’s name had come up multiple times in their operations. As it turned out Syed Farook was actively contacting Al Qaeda, Al Nusra, and ISIS. Yet even though Farook is a Sunni Muslim, an attendee of a radicalized mosque in Southern California, had traveled to radicalized areas, and had repeatedly reached out to terrorists and terrorist organizations—the FBI Director astoundingly uttered, "the contact he had was not enough to bring him onto the law enforcement radar.” What more did he need to do? On the same day FBI Director Comey uttered those words, Fox News Channel’s Megan Kelly reported on Homeland Security investigations that were literally shut down by the State Department because they focused exclusively on radicalized Muslim mosques. The man who originated the program firmly believes that had the investigations been allowed to continue, San Bernardino, would’ve never happened.

The political, cultural, and even spiritual left in America argue that it is of no use to allow Americans to arm and defend themselves. Some even go so far as to imply that law-abiding gun owners would conduct more terrorism than they would stop. Even cursory knowledge of the numbers knows that’s the opposite of what always happens—without fail.

The political, cultural, and spiritual left do not wish us to re-examine our vetting policies of how quickly we allow those coming from radicalized areas, and who practice the brand of Islam where the majority of our sworn enemies have had their minds shaped, and who can penetrate our nation’s borders because of our policies towards refugees.

And the political, cultural, and spiritual left do not want us profiling—even when common sense factors like repeated attempts at trying to contact and join Al Qaeda, Boko Haram, Al Nusra, and ISIS have been tried.

Which leaves America wondering, “then what basic steps will the American left take to even attempt to insure our security from future San Bernardino style attacks?”

And America waits for the answer…

Unless you actually believe that getting “serious” about global warming gives terrorists pause.