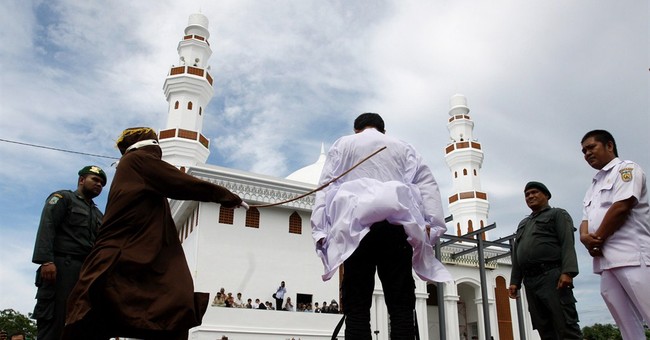 The political left in America is blind to the agenda, desires, and reality of Sharia law.

Liberals are literally scoffing at the professed desires of Islamists and jihadi radicals that want to murder in plain daylight hundreds of citizens for drawing a cartoon of the historical person Mohammed.

They do so in the aftermath of two jihadis having attempted to carry out just such a plan.

The left does not recognize Sharia as a threat to America.

The New York Times in 2011 wrote: "The crusade against Shariah undermines American democracy, ignores our country’s successful history of religious tolerance and assimilation, and creates a dangerous divide between America and its fastest-growing religious minority."

Maxine Waters, the leftist Democrat Congresswoman, attending an Islamic Townhall meeting in Orange County California in 2012 openly criticized 13 states that would seek to pass laws that would ban Sharia law from their jurisdiction. She also openly stated, "anti-Sharia laws are motivated by anti-Muslim bigotry, plain and simple.” A sentiment oft repeated in leftist circles.

In 2014 the Jewish lesbian “Rabbi" Robin Nafshi, first identified herself as a person with a wide understanding of various religious and political views and then proceeded to imply that Sharia law could be one hundred percent compatible with the constitutional life of modern day America. She also proceeded to condemn those that would say otherwise: "The politicians who endorse anti-Sharia laws are exploiting Americans’ legitimate fears of ISIS, al Qaida, Hamas and other extremist groups in order to ostracize and discriminate against the American Muslim community."

In advance of the second high profile “Draw Mohammed” contest of the past month, I was invited to participate in what has become a weekly panel on America’s Newsroom with Bill Hemmer and Martha MacCallum. In the conversation I make three inferences and two overt references to the idea that Sharia is gaining acceptance in America. I referred to it by way of “Sharia-creep.”

My opposing pundit, David Goodfriend, formerly a staff secretary for President Bill Clinton took the parting shot of the interview to lecture not only me on the “ridiculous” nature of the idea that Sharia-creep exists, but he also argued that we should be having more discussions about what the actual limits of the first amendment should look like: “I don’t think you’re doing your side any favors by talking about Shariah creep. That’s just ridiculous. What I do think what’s going on is a healthy debate about the limits of First Amendment and free speech and that’s where we ought to keep it. That’s the American way.”

So no worries about those that think Sharia law is acceptable and compatible with American life, let’s argue about limiting the amount of free speech American’s are allowed to have?

Sorry Mr. Goodfriend that’s not a healthy debate at all. It’s not where we ought to keep it, and it’s the opposite of “The American way.”

Sharia law goes beyond the private governance of muslims. In nations where it is established it undermines the civil government and dictates the public behavior—which it also demands must be modified to adhere to it’s specificities—or punishment from public floggings to the sight of hanging homosexuals from atop cranes in the center of cities does follow.

Sharia law is by its very nature a political/legal matter, and the jihadis that showed up in Garland Texas to kill Pamela Geller and 300 other Americans that night, were basing their justification of doing so on the most specific understanding of their Sharia standards.

When many of the major mosques in America have publicly declared their desire to see Sharia become the governing legal system in America, when Imams from New York City to Dearborn, Michigan have declared that such will be the case before 2050, and then the political class looks the other way—and furthermore—shames those like Pamela Geller who are speaking up as to this reality, yes Sharia-creep is very much in effect.

And while David Goodfriend was quick to play “he was brought up in a Jewish household” card, I might point out that the middle east nations where Sharia is practiced, and in the nations where ISIS now owns more geography than the United Kingdom (with a presence in 12 nations total and one contiguous region in Iraq/Syria that is larger than Great Britain alone) Jews are absent a presence within those places.

Sharia law disallows freedom of speech. Sharia law sees as blasphemous (and thus punishable by death) conversion away from Islam and to any other faith. Sharia law allows questionable sexual relationships to be arranged as it pertains to what it calls marriage. Sharia law subjugates women. Sharia law (depending on the Imam) excuses honor killings. Sharia law calls for the decapitation of those who profane the “holy men” of Islam. (And by profane that could range from the Charlie Hebdo cartoons (which were profane), the Pamela Gellar cartoon (which is not profane), to the fact that I even just put “apostrophes” around the word “holy men” to indicate that only some believe that they are holy.)

Sharia law is the justification for why 81% of those who responded to a survey from Al Jazeera Online said they support the aims of the Islamic State in it’s current attempt at conquest of the world.

The left (particularly Clinton-connected types) may have enormous short term rationalizations for why they are ignoring the changing reality of Sharia law and it’s intentions for the USA. There may be incentives, cash, cabinet positions, all to be had in touting the right line on such.

But let’s just say, I won’t be taking my advice on what I think about this or any other matter from a leftist who is blind to his own potential destruction.

Say what you wish Mr. Goodfriend.

It is those on your side, who are blind—to the evils of Sharia law and the growing nature of acceptance it is receiving here in the United States—particularly in your own political circles, and that is exactly why more “Draw Mohammed” contests must continue to take place.