Why Rudy Was Wrong! 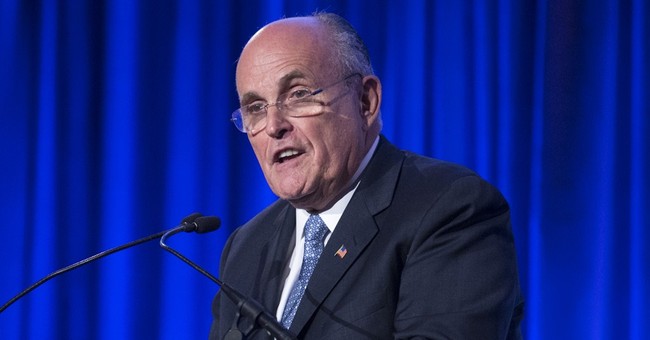 This past week at a private event in which many members of the GOP were in attendance former New York City mayor, Rudy Giuliani, said something that a vast majority of Americans have felt for several months. Many of them coming to that conclusion late in the life of the current administration, and some--far fewer--have felt Giuliani's observations for more like the duration of Obama's time in office.

To press him on the issue Fox News Chanel's Megyn Kelly had the mayor on the following evening asking him directly if he'd like to apologize.

The mayor doubled down.

"Not at all. I want to repeat it," Giuliani said. "The reality is, from all that I can see of this president, all that I’ve heard of him, he apologizes for America, he criticizes America. ... This is an American president I’ve never seen before."

Obviously the political parties were vested in making political hay of the remarks as quickly as possible, so firm condemnations from DNC spokespeople, the White House, and leftist media issued "toughly worded" and ominous warnings of the doom of the GOP if they didn't "move past this kind of rhetoric."

All I wanted to know was how the public heard the remarks.

So for my radio show on Friday across media airwaves I asked the question, took calls and tallied the reactions of the calls that both got on air--and as best we could the ones that did not as well. (These listeners crossed 500+ radio stations in addition to a few cable/over-the-air television networks.)

I asked if people felt the same way Mayor Giuliani did about the President.

76% of the respondents agreed that they personally feel that the President does not love this country (at least not the way they do.)

24% of the respondents disagreed and felt the President does love, and express love for the country.

We also tracked as best we could the ethnicity of those responding.

54.5% of those who agreed with Mayor Giuliani were White or Non-Identified.

31.8% of those who agreed with the mayor were self-described African Americans.

13.6% of those who agreed with the mayor self-identified as Hispanic.

57.2% were self-identified as African American.

14.2% were self-identified as Hispanic.

54.5% of those who agreed with Giuliani identified as female.

45.5% of those who agreed with Giuliani identified as male.

71% of those who disagreed identified as female

29% of those who disagreed identified as male.

Far from being a demographically/scientifically chosen sample, I was still surprised.

Whether the handlers, talking heads, editorialists, party officials, White House press office, or even the President himself can use effective talking points to respond to this remains to be seen. But one thing is painfully clear: a significant portion of the public genuinely feels as though the President doesn't love America.

But it was another aspect of Mayor Giuliani's reasoning that made me believe he might have gotten it wrong.

The Mayor made references to recent comments of public note by the President. He reminded us that the President chose the National Prayer Breakfast to open a conversation as to the 1200 year "crimes" of Christianity (this from the man who insists that 09.11.12--and the events of Benghazi--are ancient history.) The Mayor also pointed out the president's effervescent effusing of the "merits" of Islam even going so far as to link it to the "founding" our nation.

The Mayor should have gone further.

Multiple times from his first speech to a foreign audience in Cairo, to a speech in 2006 and another in 2009, President Obama has made public comments attempting to unlink Christianity and Judaism's historic links to our nation. Simultaneously he continues to imagine some historic link to Islam.

“Here in America,” Obama stated Thursday night, “Islam has been woven into the fabric of our country since its founding.”

The only problem being that those events happened in 1890 and 1929 respectively, while our Declaration of Independence was ratified in 1776.

Like he got it wrong with the historical accuracy of the Crusades, (they were a defensive war waged by the Christians after over 400 years of aggression, rape and enslavement by Muslims,) The first mere traces of Islam did not appear on American soil for over a century after our founding.

So while America may very well believe that Mayor Rudy Giuliani spoke for them in declaring--from his perspective--that President Obama does not love America.

The reality is actually quite different.

President Obama can't love something he has no clue about. (Or is unwilling to even take the time to learn better.)

Our President doesn't even know America.