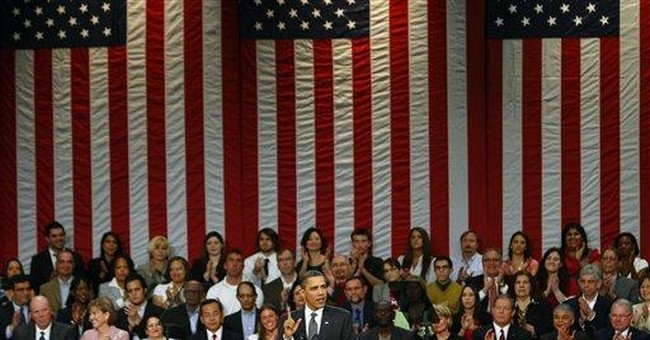 Anyone but Bush.  This was a popular and oft-repeated phrase during the twilight of our 43rd president's first term.  People incensed by the war in Iraq, people offended at the idea of a plain-talking Texan representing America around the globe, and people horrified by the President's overt embrace of evangelical Christianity united behind the common goal of giving George W. Bush the electoral boot.

Unfortunately for this coalition of malcontents, the candidate chosen to represent the "anyone but Bush" sentiment was John Kerry and his now infamous running mate John "I did not have sex with that woman, nor father her baby" Edwards.  After flipping and flopping their way through a tepid campaign, the Kerry/Edwards ticket lost the election by more than three million votes.  Thereafter, President Bush made it clear that he interpreted his second-term victory an indication that he had accumulated tremendous political capital?capital that he intended to spend.

Four years later, a weary and embattled George W. Bush left office with an approval rating of just 22%, the lowest in recorded history.  Clearly, the President's "capital" didn't buy him the good will that he thought he had, and Barack Obama rode the wave of America's Bush fatigue all the way to the Oval Office.

Turns out, however, that dissatisfaction with the "other side" does not a successful leader make, as the recent election of Massachusetts Republican Scott Brown to the U.S. Senate demonstrates.  Mr. Brown, a former Cosmo center-fold, was elected to fill the seat of uber-liberal Ted Kennedy, the now deceased Lion of the Senate.  It's unclear at this point, however, whether Democrats have gotten the message behind Brown's stunning election.  It's also likely that Republicans are also misinterpreting the signals the voters are trying to send with Brown's victory.

With the election of Mr. Brown, the voters of Massachusetts signaled a repudiation of President Obama's Chicago style, big-government, spendthrift ways.  Obama's faulty assessment of his electoral "mandate" has fueled a litany of policy failures, from health care "reform" to his unprecedented intervention into the financial and auto sectors to his sluggish response to America's unemployment crisis.  What Mr. Obama interpreted as votes for his peculiar vision of America were little more than votes against a Republican administration that in its final years seemed increasingly incoherent, out of touch, and unable to control its impulse to spend American's hard earned tax dollars in support of special interest boondoggles.

Yet as the congressional mid-term elections loom, some Republicans appear to view Scott Brown's victory in Massachusetts as an indication that America is calling for a Scott Brown-brand of Republican, or that opposition to Obama is the only criteria that matters in selecting the next generation of conservative leadership in America.  They would do well, however, to recall that Barack Obama's presidential victory and the preceding Democrat takeover of Congress were not only products of the Left's animus, but also an expression of the Right's disillusionment with a Republican leader who did not pursue policies consistent with conservative principles.  Thus Senator-Elect Brown's victory should not be interpreted as a victory for big-tent conservatism, but rather a vote against the reckless, government-centered policies of Democrats in Washington.

Conservatives traditionally embrace a theory of limited government that confines itself to a few key functions.  We want a government that respects and protects enumerated constitutional rights, fosters economic liberty, acknowledges the vital institutions of faith and family, embraces traditional morality, and maintains a strong national defense.  Scott Brown embraces several of these principles, but conservatives should remember that he is a "Bay Stater" first.  While his candidacy may have appeared to reflect traditional conservative principles when compared to his liberal opponent Martha Coakley, his words and his voting record raise some red flags.

Ambiguity on social issues does not work well for most politicians.  In the main, the public wants politicians who are willing to grasp the nettle on difficult social questions, outline a principled approach to tough, vexing issues, and take a stand rooted in conscience.  Riding the fence on hot button issues has not worked for President Obama, whose attempts to find an acceptable "middle ground" between a woman's right to "choose" and the right to life, or the sanctity of marriage and the civil rights of homosexuals, has only succeeded in alienating him from both sides of these controversial issues.

Republicans should not misread the tea leaves with regard to the Scott Brown phenomenon.  Brown was not elected because of his blue-state brand of conservatism.  He does not represent a new paradigm for right leaning politicians who, in pursuit of an electoral “golden mean,” want to have it both ways on social issues.  Plainly and simply, his election is a repudiation of an economic and social agenda that embraces a womb-to-tomb nanny state and the redistribution of wealth by government bureaucrats.

The sooner both political parties get that message, the better off we'll all be.