Keeping Religion in the Closet 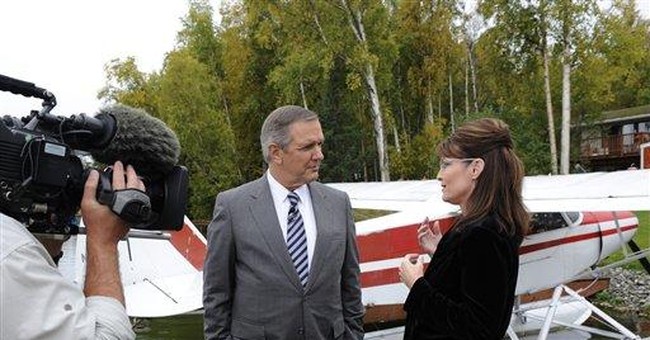 "You are the light of the world.... let your good deeds shine before men, that they may see your deeds and praise your father in heaven." Matthew 5:14,16 (NIV)

Sarah Palin's pick as John McCain's running mate has provoked predictable paroxysms from the Left about her religion.

Crack investigative reporters have leveled a slew of accusations that Governor Palin's faith is a dangerous influence on her politics. The Chicago Tribune breathlessly reports that she has "labeled the U.S. mission in Iraq a 'task that is from God,'" and that she (gasp!) "argued that public school students should engage in a 'healthy debate' between evolution and creationism."

Hyperventilating, The New York Times reports that she actually asked her pastor for biblical examples of great leaders, saw God's hand in the direction of her life, and encouraged church leaders to pray that God's will would be realized in an Alaskan pipeline construction process.

Never mind that an overwhelming majority of Americans say they are Christians (76.5% according to a 2001 poll), or that most of the people alive during the American founding held strong Christian beliefs. And never mind the facts: Mrs. Palin merely asked that people pray that the Iraq mission would be a task that is from God—she did not claim that it was (Abraham Lincoln issued a similar plea during the Civil War). And never mind that millions of Americans believe that competing views of the origin of life should be thoroughly vetted in the classroom. Apparently, a politician whose faith actually influences her life is regarded as a danger to America's founding principles.

The truth is, the controversy over Palin's religion boils down to one simple fact: modern pop culture and the media have tried to push religion into the closet, and they cannot stand to watch a politician speaking publicly about her faith. Cole admits as much, declaring, "The most noxious belief that Palin shares with Muslim fundamentalists is her conviction that faith is not a private affair of individuals but rather a moral imperative that believers should import into statecraft wherever they have the opportunity to do so." No doubt Mr. Cole would go apoplectic over the words of James Iredell, a justice of the Supreme Court appointed by George Washington, who said, "I think the Christian religion is a Divine institution; and I pray to God that I may never forget the precepts of His religion or suffer the appearance of an inconsistency in my principles and practice." And Cole would undoubtedly fulminate at the words of Benjamin Franklin who declared, "The only foundation for... a republic is to be laid in Religion. Without this there can be no virtue, and without virtue there can be no liberty..." Heaven forbid someone's moral beliefs (which are inevitably informed by their religious beliefs) should impact their actions!

The fact that the secular media does not understand or agree with the fundamental principles of biblical Christianity should not inhibit Christians from engaging in the public square. Our Constitution declares that "...no religious test shall ever be required as a qualification to any office..." America's Founders sought to ensure that every person seeking office had a right to their own religious beliefs. Forcing them to hide those beliefs in a closet would be the real violation of America's founding principles. Furthermore, advancing legislation that is consonant with one's faith does not necessarily run afoul of the First Amendment's proscription of the establishment of religion. In Harris v. McRae, the Supreme Court rightly observed, "It does not follow that a statute violates the Establishment Clause because it happens to coincide or harmonize with the tenets of some or all religions. That the Judeo-Christian religions opposed stealing does not mean that a... government may not, consistent with the Establishment Clause, enact laws prohibiting larceny."

Christianity is not incompatible with a republican form of government. It is the foundation of republican government. Our Founders recognized this. John Jay, President of the Continental Congress and America's first Chief Justice of the Supreme Court, declared, "No human society has ever been able to maintain both order and freedom, both cohesiveness and liberty apart from the moral precepts of the Christian Religion applied and accepted by all the classes. Should our Republic ere forget this fundamental precept of governance, men are certain to shed their responsibilities for licentiousness and this great experiment will then surely be doomed." Jay, who co-wrote The Federalist Papers with Alexander Hamilton and James Madison, knew whereof he spoke.

Those in the media who are assailing Sarah Palin's religion would do well to reflect on the words of Mr. Jay and his founding brothers. Their attempts to exorcise religion from the public square will inevitably cause more harm than good.