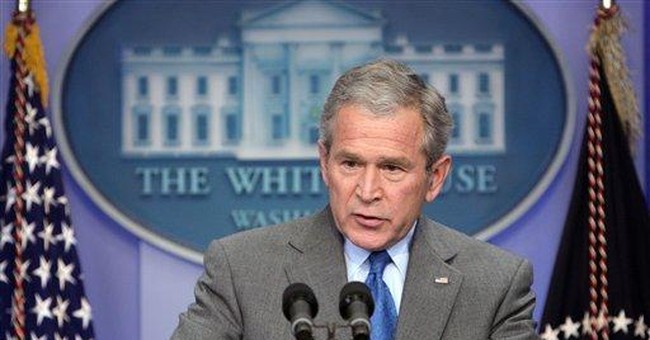 From the earliest days of our republic, it has been well understood that the powers of the federal government are limited in scope. To ensure against federal encroachment on the rights of the states to regulate matters within their own borders, the Tenth Amendment to the Constitution provides that those powers not delegated to the federal government by the Constitution "are reserved to the States respectively, or to the people." Limited central government is one of the underlying principles of conservative thought.

Another principle that under girds conservative thought is the notion that people ought to be accountable for the consequences of their actions. Conservatives know that accountability and responsibility run hand in hand. If wrongdoers are not held accountable for their wrongdoing, they will persist in their bad behaviors.

The faithful application of these principles has helped create the freest and most prosperous country in the world. Sadly, however, these principles are crumbling and, surprisingly, many a conservative is wielding the sledgehammer.

For the past few years, the Bush administration has been waging a war of "preemption" against state and local government control. Preemption is a doctrine that holds that when Congress legislates extensively in an area relating to commerce, state or local governments are precluded from enacting any conflicting requirements. In other words, Congress is deemed to have "preempted the field", and state and local governments have no further say in the matter. Preemption is a power that should be sparingly applied because it undercuts state and local control. Conservatives have long been proponents of local control because they know that government closest to the people works best. Federal bureaucrats far from the scene are unlikely to be responsive to the concerns of people at the local level.

It should, therefore, be disconcerting to conservatives that bureaucrats in various federal agencies in Washington , D.C. (agencies like the Food and Drug Administration, the Consumer Products Safety Commission, and the National Highway Transportation Safety Administration) have been expanding their control by including preemption language in bills that increases the scope of their jurisdiction. Often this language is inserted at the last minute in order to avoid detection and debate. Once in effect, the preemption language is used to eviscerate the authority of the states to regulate in the areas that are under the control of the agencies.

One example of the erosive effects preemption can have on the rights of individuals is evident in the Supreme Court's recent decision Riegel v. Medtronic, Inc. There the Court held that an individual injured by a defective medical device which had been approved by the FDA prior to being marketed could not recover for his injuries even though he had a remedy under state law. In other words, approval of the product by federal bureaucrats (notwithstanding defects in its design or manufacture) immunized the manufacturer from accountability for its wrongdoing.

Principled conservatives should be outraged by this result. It takes control away from the people at the local level, allows wrong doers to avoid the consequences of their neglect, and shuts the doors of state courthouses to the victims of the wrongdoing. The decision of FDA bureaucrats trumps the judgment of lawmakers and jurors in the communities where the injuries occurred.

Do you think the executives at Medtronic learned any lessons?

The big winners, of course, are the corporations which the FDA regulates. Sadly recent events suggest that FDA bureaucrats view the corporations they regulate as their principal constituency, rather than the American people whose safety is affected by the drugs and devices they allow to be put on the market. The blessing of the FDA in cases like Riegel immunizes corporate wrongdoers from accountability and tramples upon the rights of the individual. The great equalizer between the weak and the powerful, the local jury, is not an option for an injured victim. Neither is petitioning one's own state or local government for relief since their traditional authority has been preempted by the feds.

Wherever conservatives gather, state's rights and smaller government has been the mustering call. But when it comes to protecting the right to seek redress before a jury of one's peers, a quintessential conservative principle, the ranks are slim. Though conservatives maintain they trust the people, many do not act that way when it comes to the ladies and gentlemen of the jury. Conservatives have often been in the foreground of undermining the right to trial by jury. As that right erodes, however, the principles of limited government and personal accountability will crumble.