Ken Blackwell
|
Posted: Mar 11, 2019 12:01 AM
Share   Tweet
The opinions expressed by columnists are their own and do not necessarily represent the views of Townhall.com. 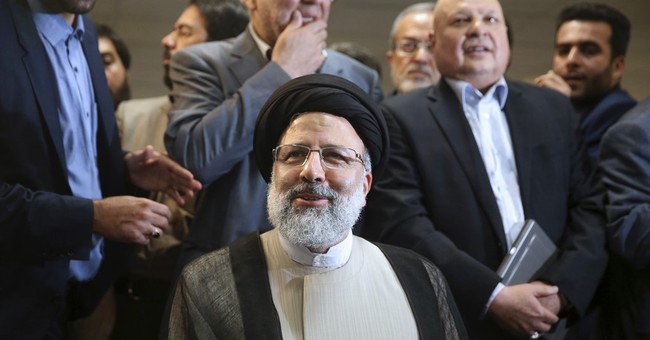 The appointment of Cleric Ebrahim Raisi as head of the Iranian judiciary on Thursday was met with wide-ranging international condemnation. Statements from groups such as Amnesty International have highlighted Raisi’s record as one of the most brutal figures in the modern history of Iranian jurisprudence, owing especially to his leading role in the massacre of 30,000 political prisoners in the summer of 1988.

The National Council of Resistance of Iran echoed this criticism. It has sought over the years to bring broader international attention to the massacre. This is to be expected, since the NCRI’s main constituent group, the People’s Mojahedin Organization of Iran (MEK/PMOI), was the main target of the bloodbath which sought to wipe out organized opposition to the theocratic system.

Raisi’s ascendance to the head of the judiciary is just the latest example in a trend that the NCRI has also repeatedly sought to highlight. Tehran’s worst perpetrators of human rights abuse have frequently been rewarded for their crimes with promotions to more influential positions, while facing no genuine consequences on the world stage.

There is another aspect to this trend that the NCRI emphasized in its statement on the Raisi appointment. By elevating the hardline judge and former presidential candidate, Supreme Leader Ali Khamenei “proves once again that as the head of the crisis-stricken theocratic regime, he finds no solution other than a hard turn towards further repression,” the NCRI stated.

The crisis in question is twofold: widespread domestic unrest, the effects of which have been amplified by rising levels of international isolation for the Iranian regime. The domestic unrest began in earnest in the final days of 2017, and by mid-January 2018, public protests had spread to well over 150 cities and towns. Participants chanted slogans like “death to the dictator,” leaving no doubt about the popular demand for regime change.

Against the backdrop of that unrest, Khamenei was forced to acknowledge that the demonstrations’ spread had been driven in large part by the MEK, a break from prior portrayals of the Iranian Resistance as marginal and lacking in social influence. President Hassan Rouhani personally called French President Emmanuel Macron to demand that he limit the activities of the NCRI in France. Macron refused.

Raisi’s promotion also speaks to the foolishness of the stubborn adherence in some circles to the myth of moderation, wherein Rouhani’s 2013 election as president of the Islamic Republic was greeted as a victory. But by the time that Donald Trump took office as Rouhani’s counterpart in Washington, it had become clear that the promised moderation was not forthcoming. Repressive policies included expanding the separation of women and men in public, banning additional media outlets and online services, and enhanced deployment of morality police to confront everyday Iranians over alleged violations of Islamic law.

Notwithstanding Tehran’s supposed compliance with the 2015 Iran nuclear deal, its foreign policy continued to be characterized by belligerence toward the West, ballistic missile tests, a military buildup, and provocative maneuvers in the presence of Western vessels as they transited the Persian Gulf. Not to mention successive terrorist plots on European and US soil.

All of this speaks to an overarching impulse to avoid moderation at all costs. But despite launching a harsh crackdown, the ruling regime has been unable to crush the rising tide of unrest. Protests, strikes, demonstrations and clashes continue to erupt in villages, towns and cities.

In this sense, the appointment of Raisi as the new judiciary chief is just the latest in a series of efforts to reassert a national identity that is under threat of overthrow at the hands of a resentful and overwhelmingly pro-democratic population.

The regime may see “no other solution than a hard turn towards further repression,” but ultimately, that is no solution. The Iranian people have continued to demonstrate in favor of dramatic reform and outright regime change even in the wake of thousands of protesters being arrested, and dozens killed.

The resilience of Iran’s activist community was on display here in Washington this week, as thousands of Iranian-Americans marched in support of the NCRI and its 10-point Plan for an Iran that is free, democratic, and nonnuclear. They sought to bring the message of Iran’s people to Washington. Simply put, they have had enough.  They are strong.  They are capable.  And they’re determined to succeed in overthrowing this evil and illegitimate regime.  They deserve moral and political support from the democratic nations of the world.