Judge Gorsuch Is A Mainstream Constitutionalist

Ken Blackwell
|
Posted: Feb 05, 2017 12:01 AM
Share   Tweet
The opinions expressed by columnists are their own and do not necessarily represent the views of Townhall.com. 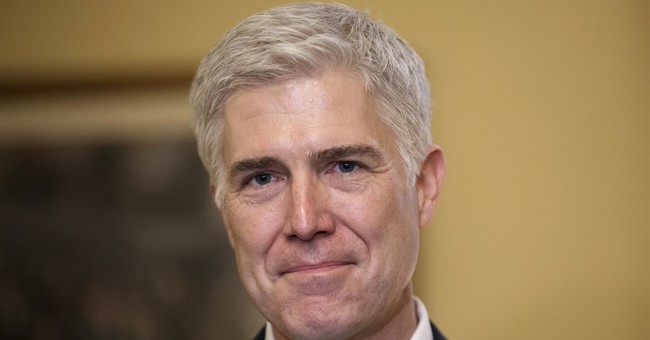 “Mainstream”.  We are having a country-wide civics lesson on who is or is not out of our mainstream: Senate Democrats or the Supreme Court nominee Judge Neil Gorsuch.

Minority Leader Chuck Schumer said he’ll fight “tooth and nail” against any Supreme Court nominee who’s outside the mainstream, and many of his Democratic colleagues have said that means a filibuster, which will require 60 votes to end in the 52-48 Senate. Tuesday night President Trump nominated Judge Gorsuch to fill Scalia’s seat on the high court. We’ll now see who is in the mainstream – this Tenth Circuit judge, a distinguished scholar who’s a graduate of Columbia University, Harvard Law and Oxford University (doctorate in legal philosophy) or Schumer and Senate Democrats, if they refuse to give Trump’s nominee an up-or-down vote.

I like Gorsuch’s chances, given his well-established views on the rule of law in general and religious liberty in particular.

It’s an important question for the American people. One out of five voters said the Supreme Court was “the single most important reason” for them in the November elections, according to exit polls. They wanted a voice in the future direction of the high court. Trump has obliged by naming a fair and open-minded jurist whose opinions are often embraced, if not cited, by the Supreme Court.

Are Gorsuch’s views the proper approach to judging mainstream? If they’re not, the American public is probably going to wonder why not. Consider the words in his memorial tribute to Scalia:

“[J]udges should instead strive (if humanly and so imperfectly) to apply the law as it is, focusing backward, not forward, and looking to text, structure, and history to decide what a reasonable reader at the time of the events in question would have understood the law to be—not to decide cases based on their own moral convictions or the policy consequences they believe might serve society best.”

Are Schumer and Senate Democrats ready to tell the public that asking Supreme Court justices not to act as legislators in black robes but pay heed to the actual text of our laws and Constitution is somehow beyond the pale?

The rule of law, not the rule of judges, is a theme Gorsuch has returned to often in his work.  “Ours is the job of interpreting the Constitution,” he wrote in a concurrent opinion. “And that document isn’t some inkblot … but a carefully drafted text judges are charged with applying according to its original public meaning.”

Gorsuch is just as principled and tenacious when it comes to protecting those rights actually enshrined in the text of our Constitution and laws. Which brings me to his sterling record on religious liberty. He joined a stirring dissent when the Denver-based appeals court let stand the Obamacare mandate for religious institutions in the Little Sisters of the Poor case. (“When a law demands that a person do something the person considers sinful, and the penalty for refusal is a large financial penalty, then the law imposes a substantial burden on that person’s free exercise of religion.”)

The Supreme Court ultimately agreed with Gorsuch and the Tenth Circuit dissenters in Little Sisters.

A major religious liberty case found Gorsuch with the Tenth Circuit majority – and the Supreme Court ruling later in agreement.   In Hobby Lobby, Inc. v Sebelius, the 10th Circuit majority ruled that such corporations were “persons” who could claim protection under the Religious Freedom Restoration Act.  In a separate concurring opinion he wrote: “[The Obamacare] mandate infringes the [owners’] religious liberties by requiring them to lend what their religion teaches to be an impermissible degree of assistance to the commission of what their religion teaches to be a moral wrong.”

It’s hard to believe that Americans are going to find Gorsuch’s religious liberty jurisprudence – or many other legal issues, for that matter – outside anyone’s mainstream. The Supreme Court did not.