Slow Walking Our Embrace of Trump

Ken Blackwell
|
Posted: May 11, 2016 12:01 AM
Share   Tweet
The opinions expressed by columnists are their own and do not necessarily represent the views of Townhall.com. 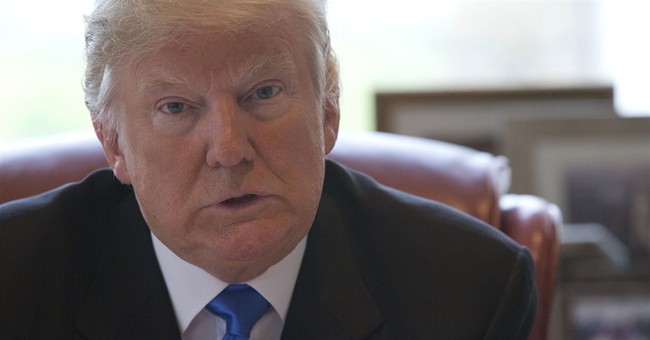 Donald Trump is the presumptive Republican Party nominee for president. His imminent triumph has created shock and dismay within the GOP. A number of top Republicans are threatening not to support Trump. A few have proposed launching a third party bid.

Trump has given conservatives good reason to doubt his candidacy. It’s hard to know what he really believes. Every day Donald is one tweet away from reversing himself. Moreover, he is an underdog in an election which Republicans once were the odds-on favorites to win.

He also has too often abandoned any pretext of civility. He insults Republicans along with Democrats. If elected he would have trouble working with many top GOP officials.

Nevertheless, come November Donald Trump will most likely be the only person standing between America and President Hillary Clinton. The issue isn’t whether he’s the best choice. She is the (much) worse choice.

Donald Trump is not a crusader for smaller government. But I hope he’s pragmatic enough to recognize which party chose him as its nominee. Moreover, no one should doubt Hillary Clinton’s determination to expand the state at every turn.

Trump the businessman has experience in confronting bureaucracy, and the Democrats are prolific regulators. President Barack Obama has imposed costly new rules at a rapid pace. Clinton likely would set new records.

Then there’s the judiciary. Antonin Scalia’s death has upset the delicate balance on the Supreme Court. Turning those appointments over to a liberal Democrat would lose the court for a generation, undermining any future conservative political victories.

America’s international security and standing also are at stake. Clinton had a disastrous hand in her husband’s presidency, noteworthy for the debacle in Somalia, unnecessary war in the Balkans, and broken agreement with North Korea. Then she was the first term Secretary of State for President Obama. What more needs to be said?

Some Never Trump Republicans imagine running a third party candidate and win the presidency. It’s a fantasy. Legal and logistical difficulties make such a challenge problematic. A true conservative would only take votes from Trump, allowing Clinton to win a landslide victory.

In theory a centrist could take votes from both Clinton and Trump to create a winning coalition. But finding and financing such a magic candidate is unlikely. Moreover, Democrats determined to win the presidency aren’t likely to split their votes.

In fact, only someone more liberal than Clinton is guaranteed to take votes away from Clinton. Why would any conservative want to elect someone like that?

A third party bid also would undermine Republican congressional and state candidates. If Trump loses, as expected, it will be even more vital to hold onto Congress. Yet a third party bid would draw money
and votes away from Republicans. GOP candidates would be pushed to choose between Trump and the independent Republican, angering one group of voters or another. Giving Democrats control of all three branches in this way would be disastrous.

Some conservatives suggest a different strategy. Run one or more third party candidates to win five states, denying both Clinton and Trump the necessary 270 votes for election. This aims for somethings ever before achieved.

In the past, Americans supported third party candidates who ran either to win or promote a cause. How many voters instead are likely to cast their ballots for an independent candidate in hopes of having the election decided by the Congress of the United States?

The last resort for some Republicans is to simply refuse to support
Trump. Yet every dollar and vote denied Trump is essentially one
given to Hillary Clinton and the Democratic Party. Ensuring a worse
electoral outcome.

Donald Trump’s expected nomination comes as a disappointment for many Republicans. However, by every standard Clinton is worse. Conservatives might reluctantly vote for Trump.But, they should consider a vote for him nevertheless, if he becomes a standard bearer of our platform. A platform that has made us the majority party in the United States.

Politics is the art of the possible. That doesn’t mean abandoning principle. But if the good is unavailable, it means preferring the politically unattractive to the politically ugly . Too much is at stake for conservatives to treat the presidential election like a kamikaze mission or for Trump to be dumb.