Ken Blackwell
|
Posted: Apr 29, 2016 12:49 PM
Share   Tweet
The opinions expressed by columnists are their own and do not necessarily represent the views of Townhall.com. 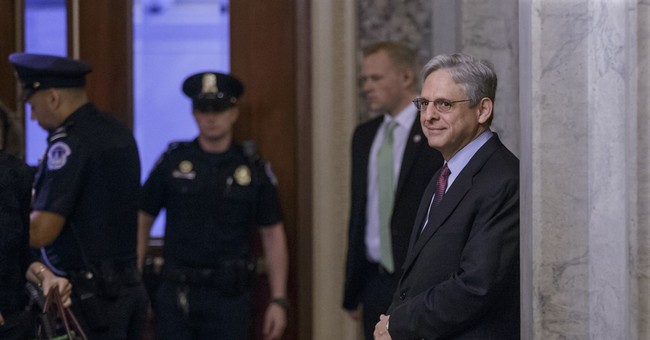 While much of our attention is on the presidential race, the looming battle over a Supreme Court nomination merits no less attention. The battle lines are clear in this nomination and the future of the Court and our Constitutional principles are at stake. Unfortunately, writing in today’s Wall Street Journal, former US Solicitor General Ted Olson calls for Republicans to engage in a truce over Supreme Court nominations and confirm Merrick Garland. This is not the first time Ted has parroted liberal talking points in recent years.

Olson is conveniently engaging in stark revisionist history. He claims a grand truce means that Republicans should let the Garland nomination proceed and the Democrats need to follow this example in the future and be more deferential to Republican judicial nominations. I think he misses the fact that Republicans have tried this in the past, but it’s been a one-sided truce.

Republicans showed deference to the President’s nominees allowing Justices Breyer and Ginsberg to go through easily. Breyer was confirmed 87-9, while Ginsberg was confirmed 96-3. In those confirmations, the Republican Senate returned to the “traditional” Senate practice on nominations. This, coming after the Democrats all-out assault on Republican judicial nominations, like Robert Bork and Clarence Thomas.

How was this deference met by the Democrats? It was followed by unprecedented filibustering of Bush judicial nominations. Qualified and talented Judges like Miguel Estrada, who would have been the first Latino Judge on the DC Circuit Court of Appeals and Janice Rogers Brown, who had been the first black woman to serve on the California Supreme Court, were filibustered for years. Ted also leaves out the fact that the Democrats trashed the Gang of 14 “deal” that had been reached in the Senate to move nominations forward.

The so-called truces where Republicans show deference to the Democrats on judicial nominations with the promise that the same courtesy will be returned reminds me of Lucy’s promise to Charlie Brown that this time she really won’t pull away the football.

In addition to ignoring the previous “truces,” Olson also errs in his analysis of Garland’s record. While Olson speaks glowingly of Garland’s education, qualifications and temperament, it’s critical to note that Judge Garland’s record shows there is no doubt that he will be a rubber stamp vote for the Left. His confirmation will cement a liberal majority on the court. Which won cheers from the New York Times when it reported that “a Supreme Court with Merrick Garland would be the most liberal in decades.”

The notion that Garland is a “moderate’ is simply not true. For the first time in its 73-year history, the National Federation of Independent Business (NFIB) has taken a stand on a Supreme Court nomination by opposing Garland. From the NFIB legal analysis of Garland: “Judge Merrick Garland has served as a judge on the D.C. Court of Appeals since 1997, where he has decided over 150 cases on regulatory issues. In those cases, he rarely sided with business. In cases against the federal government, that amounts to a 90 percent win-rate for government over business.”

The NFIB report also points out that in cases involving Labor Unions, Garland has sided with Big Labor 100% of the time, that and he is a big judicial advocate of the National Labor Relations Board. According to their extensive analysis, Garland virtually always sides with government agencies, environmentalists and big labor and against American businesses. NFIB asks “If that’s ‘moderate,’ what is a liberal?”

In addition, the NRA opposes Garland, saying his judicial record on the Second Amendment would bring “the end of the fundamental individual right of law-abiding Americans to own firearms for self-defense in their homes.” Finally, Garland would clearly be the deciding fifth vote on the Court in favor of partial birth abortion.

Writing in the Wall Street Journal about high-minded fantasy truces may cement Olson’s status among the mainstream media and in various elite liberal social circles, but no one is going to fall for his political tomfoolery. The reality is that he wants a one-sided truce where conservatives would help create the most liberal/radical court in a generation, all in return for a pinky swear promise that the Democrats will do the same sometime in the future.

That’s no truce—it’s a surrender.