Boys Without Dads: A Cruel and Volatile Calculus 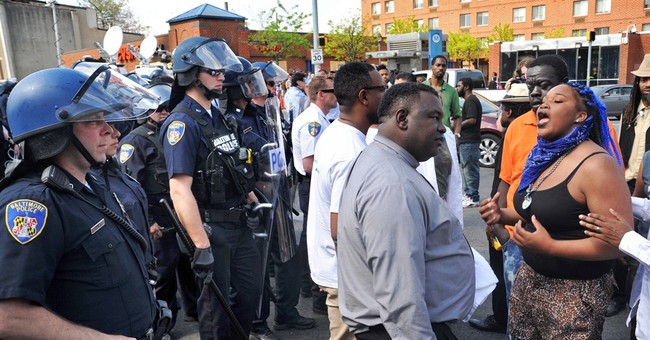 Editor's Note: This column was coauthored by Rob Schwarzwalder

The rioting in Baltimore is disturbing to all Americans, as the unresolved cause of Freddie Gray’s death while in police custody should be, as well.

It is right that political and religious leaders, community groups, business organizations, and law enforcement officials are commenting about all the causes and effects of the riots. But one thing seems missing from the discussion, a factor whose omission is unacceptable. It’s called fatherhood.

The rioting is inexcusable but should not be wholly surprising. It is likely that the great majority of it was been done by young black men – young black men without fathers.

Yet among black families, the data are even more troubling. Here are some sobering statistics:

· The 2012 American Community Survey, conducted by the U.S. Census Bureau[cnn.com], found that “more than 19 million children across the country – 26 percent -- are living without a father in the home. In Baltimore, among African-American children, the rate is 69 percent.”

· And “in 2013,” according to Child Trends[childtrends.org], “72 percent of all births to black women … occurred outside of marriage.”

Compounding all of this is an analysis by the CDC that, as reported by The Atlantic[theatlantic.com], “An African-American woman is almost five times likelier to have an abortion than a white woman … (B)lack women still have higher rates of abortion even when controlling for income, according to a 2008 report by the Guttmacher Institute. At almost every income level, African-Americans have higher unintended pregnancy and abortion rates than whites or Hispanics.”

In an environment in which healthy male role models and, more importantly, caring and capable dads in the home, simply aren’t there, and in which human life is so commonly devalued in neighborhood abortion centers, is it any wonder that cohorts of young men go on rampages when provocation arises?

In 1965, Daniel Patrick Moynihan, then an Assistant Secretary of Labor in the Johnson Administration and later a U.S. Senator from New York, issued his famous “The Negro Family: The Case For National Action.” In it, he wrote, ““The fundamental problem is that of family structure. The evidence—not final but powerfully persuasive—is that the Negro family in the urban ghettos is crumbling.”

The decline of the black family predicted by Sen. Moynihan has become an eerie reality. Its effects transcend fatherless, as well. The collapse of family structure in the African-American community has fostered poverty and hopelessness.

Clearly, the solution is healthy marriage and strong families. As Jason L. Riley writes in the Wall Street Journal[wsj.com], “In 2012 the poverty rate for all blacks was more than 28 percent, but for married black couples it was 8.4% and has been in the single digits for two decades. Just 8 percent of children raised by married couples live in poverty, compared with 40% of children raised by single mothers.

As one of us (Blackwell), wrote with Pat Fagan last year in The Washington Times[frc.org],

Marriage is the greatest ‘program’ to end poverty, child abuse, child sexual abuse, school dropout, college failure, health problems, drug problems, depression, out-of-wedlock births to teenagers, reduce abortions, increase homeownership and savings … We know that when you remove marriage as a factor, there is virtually no difference between whites and blacks on graduation, employment and staying out of jail.

There will be plenty of time to discuss the things that animated and informed the wildness in the streets we’ve witnessed in Maryland’s largest city. But not to talk about fatherhood, its absence in the black community, the dire economic consequences it absence brings, and the young lives deeply wounded by being bereft of loving, stable, strong Dads in the home would only compound the pain.

One qualification to the previous paragraph: that is, Dads in the homewho are married and faithful to their wives.

A married mom and dad who love and are committed to one another and to their sons: Along with faith in Christ, these are the greatest gifts any family can give the boys it raises. That these gifts are being withheld so extensively from black teens and young men has been demonstrated vividly on the streets of Baltimore.