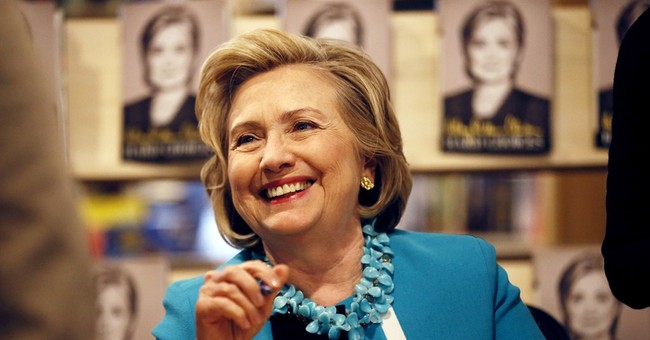 Hillary Clinton’s famous “listening tour” of Upstate New York in 2000 eased her way into the U.S. Senate. She was the first liberal politician in years to discover there was an Upstate New York. Who knew?

She then spent eight years in the Senate, the “world’s greatest deliberative body,” during which time she distinguished herself only by voting for the Iraq war. She spent much of the middle years of the decade trying to explain away her vote.

Hillary Clinton ran for president in ‘08 against the dovish Sen. Barack Obama. He is credited with the best putdown in the history of Democratic presidential debates. Without looking up from his notes during their New Hampshire encounter, the Senator from Cool said: “You’re likeable enough, Hillary.”

One aspect of the Hillary-Barack Obama contest little noted since has been the fact that in primary after primary, it was Mr. Obama who won the women’s vote. He won among black women, of course, but he won among white women, too. She claimed to have put eight million cracks in the glass ceiling of presidential politics, but he won the real prize—women’s votes. Maybe she’s not quite likeable enough.

As President Obama’s Secretary of State, she “re-set” our relations with Russia. She famously gave Foreign Minister Sergei Lavrov a big red button with that word spelled wrong in Russian, and not even written in their Cyrillic alphabet. She would later tell a BBC interviewer she thought the Russian re-set was “a brilliant stroke.” [Watch it here at 4:56] Crimea River was the jibe that critics of the Obama-Clinton Russia policy retorted. Can anyone outside the Kremlin think President Obama’s policy toward a brutally aggressive Russia has been a success?

She went to Canada in 2010 and managed to insult our nearest allies in their own capital. She bitterly denounced the Conservative government of Prime Minister Stephen Harper for failing to push abortion in Africa. Here’s what one alert Canadian news outlet reported:

Marie Smith, director of the U.S.-based Parliamentary Network for Critical Issues, said “Clinton is revealing to the world that a pro-abortion ideology at the highest levels of the U.S. government has hijacked the noble goal of reducing maternal deaths by re-defining maternal health to include access to abortion.” Clinton made it clear that the Obama administration not only considers abortion part of maternal health but has implemented policies and funding based on that understanding. Campaign Life Coalition national president Jim Hughes said, “Hillary Clinton is merely trying to force her own pro-abortion agenda onto the world stage as she attempts to influence G-8 leaders and oppose Canada’s position.” He labeled her position “morally bankrupt.”

Now, her book tour for her memoir, "Hard Choices," has turned into a demolition derby. She has had to defend comments she made about leaving the White House “dead broke.” It’s hard to imagine how that could be when Bill Clinton was selling presidential pardons like a fire sale.

Still, she soldiers on. Desperate to swim away from the shipwreck of Mr. Obama’s foreign policy, she is criticizing the Voice of America’s Broadcasting Board of Governors for failing its messaging to the Arabs. Except, as Heritage Foundation’s Helle Dale notes, she did nothing to help VoA when she sat on that very board.

She enthusiastically backed President Obama when he bowed to Saudi Arabia’s King and cooed the Jew-hating Muslim Brotherhood in Egypt.

I agree that our “messaging” to the Arab world could be better. The U.S. should tell Arabs to stop murdering their neighbors who worship differently, stop genitally mutilating girls, and stop enslaving women. Butthat message would have to have conviction behind it.

You don’t win the Nobel Peace Prize, however, for talking Turkey to the Arabs. Madam Secretary cannot escape the fact that for four years, she led the Amen Corner, applauding this president and crafting his failed foreign policy. She will be no more likely to distance herself from these disasters than she was able to persuade Iowa voters in 2008 she was ready to take that 3 a.m. phone call in the White House.

Maybe she should stay home awhile. She should hold up in one of her modest cottages—in Georgetown or Chappaqua—put on some comfortable shoes and read the book reviews on "Hard Choices." In the run-up to 2016, she’ll have another hard choice to make. And she might find some comfort in that 1930’s jazz classic by Mildred Bailey—“I Shoulda Stood in Bed.”