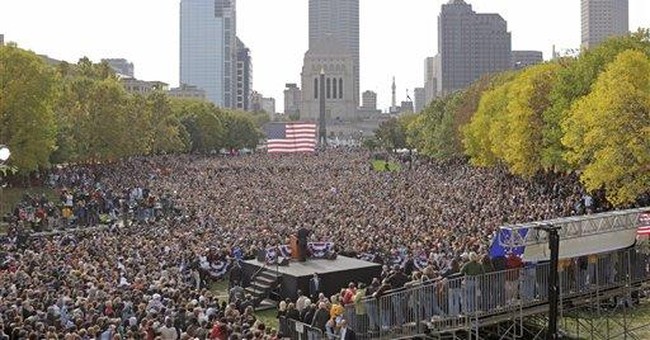 Thanks to Joe the Plumber, we now know for sure that Barack Obama wants to "spread the wealth around." But the Democratic candidate still hasn't come clean on just how much of a European-style socialist he is.

In other words, his "rebate" is a welfare plan, plain and simple.

When called on this, Obama's answer is that those 38 percent still pay payroll taxes, so he's rebating part of those payments. But that actually puts him deeper into the socialist hole. Here's why.

Payroll taxes go to fund Social Security and Medicare - the main US social-insurance programs. The taxes are dedicated because these are insurance programs - you're paying so that you'll be covered when you hit retirement age.

But, down the line, these programs face a financial crisis even worse than the housing mess that we're in now. They need literally trillions more dollars (above what they're set to take in) to meet their current obligations. By federal law, absent those new funds, every retiree will automatically have his or her benefits cut.

If Obama means to rebate those payroll taxes from the Social Security/Medicare funds, he's accelerating the bankruptcy of those programs. If not, he's still transferring money from people who pay income taxes to those who don't.

There's more: Either way, Obama is effectively changing these cores of American retirement from social insurance programs to European-style social welfare programs: Instead of each of us paying into the fund, and later collecting on that basis, some people will be paying in less to collect the same benefit.

That's a flat-out repudiation of President Franklin Roosevelt's vision in founding Social Security, and of the promise that's always underlain Medicare. Neither was ever supposed to become a charity program - but Obama's pointing down just that road.

The Obama double bind is either bankrupt our nation's retirement programs or put the nation on the path to European-style socialism. Which is it?

No wonder Obama is so popular is Europe: The Europeans finally found an American who thinks like they do. (And they won't mind in the least when we start suffering the sky-high unemployment and lack of economic growth that socialism has given them.)

Of course, Obama knows that the term "socialist" would kill his plan, so he calls it a "refund" instead. But there's no way it's not socialist; he's either:

• Giving a "refund" on taxes people never paid to start with,

• Moving us drastically closer to the day Social Security and Medicare go bankrupt, requiring a massive bailout by other sources of taxation,

So, which is it? Of course, the mainstream media won't force him to answer that question - they're shamelessly in the tank for him.

So it's up to voters to force Obama to answer - to explain how his tax plan is (somehow) neither socialism nor a deadly blow to Social Security and Medicare.

The deficit now runs hundreds of billions of dollars per year. Yet Obama proposes almost $1 trillion of new spending - and promises to also give "rebates" to the 38 percent of us who pay no income tax. Where is that money coming from?

He's put himself in a fiscal box.