The March for Life Is Also a Women’s March

Katie Yoder
|
Posted: Jan 18, 2019 12:01 AM
Share   Tweet
The opinions expressed by columnists are their own and do not necessarily represent the views of Townhall.com. 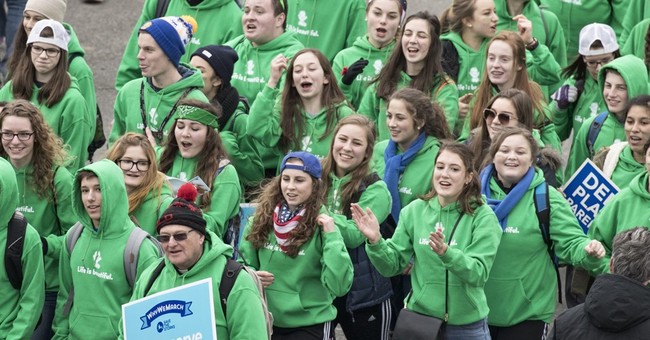 The March for Life is, at its core, a women’s march.

January 18 marks the 46th annual March for Life held in Washington, D.C. The rally champions life, especially of the unborn, by challenging Roe v. Wade, the 1973 Supreme Court case that legalized abortion. Each year, the march boasts high-profile speakers and attracts up to hundreds of thousands of marchers – young, old, men, and, yes, women.

The march calls attention first to the humanity of the unborn. But that’s why it’s also a women’s march: the event values all persons equally from their conception, whether male or female.

It’s a march for women, by women. Women support unborn life regardless of race or sexual orientation. They are Republicans and Democrats, religious and secular, feminists and those who shrug off the label. But this past year’s media coverage disguises women as a rarity – if not an oddity – in the pro-life movement.

Reversing Roe, a Netflix documentary released in September, features 13 women who supported abortion, and only one pro-life woman. That was the filmmakers’ choice: pro-life women confirmed they were interviewed for the project – some for days.

And, when abortion becomes more accessible, many media celebrate it as advancing all women. In May, the networks applauded Ireland’s vote for abortion as a “women’s rights” win. Women’s magazines did similarly.

But pro-life women exist. An Aug. CBS/Refinery29 poll revealed 72 percent of millennial women are likely in favor of abortion restrictions. On Jan. 15, a Marist poll found 75 percent of Americans – including women – agree abortion should be limited to the first three months of pregnancy. Nationally, women lead the pro-life movement, like March for Life president Jeanne Mancini.

“Every abortion harms mother and baby,” she stressed, adding that past marches aimed to “bring to light the truth that life is the empowering choice for women.” The 2019 theme emphasizes science’s role in the pro-life movement, from revealing the unborn baby’s unique DNA at fertilization to its heartbeat at six weeks.

"It's a scandal that many journalists and media ignore embryology specifically, and medical and scientific reality generally, in order to serve as, in effect, marketers for the interests of the abortion lobby," commented Americans United for Life President Catherine Glenn Foster. She agreed the march represented especially “women and the vulnerable.”

“All women, she said, “deserve to have their stories told, not just those whose circumstances and values align to those of mainstream media.” Those included former abortion workers, represented by Johnson’s group, And Then There Were None.

Students for Life President Kristan Hawkins added the march “is the most pro-woman event in the nation” because “we want help all women, no matter their stage of development.”

As the head of New Wave Feminists, Destiny Herndon-De La Rosa said, each January, she attends two women’s marches: the March for Life and the Women’s March. “We would help so many more women, both born and unborn, if we were able to join forces and work together to better advocate for ALL women,” she stressed.

Unlike the March for Life, the Women’s March is recognized for representing women. The event, which began in opposition to President Trump in 2017, occurs a day after the pro-life march for “all women.” But from its inception, the Women’s March either uninvited or refused pro-life groups led by women as partners. Soon after, it partnered with Planned Parenthood and adopted an abortion-friendly platform.

Instead of seeing disagreement as an opportunity for dialogue, the Women’s March cut itself off from women who are different. There are areas both sides might unite on – from providing resources for women keeping their babies to fighting sex-selective abortion that ends millions of female fetuses simply because they aren’t as valued as males.

Many see those challenging abortion as wanting to control women’s bodies and personal decisions. The difference comes in that pro-lifers see two people, not one, in every pregnancy.

It's time the media and women’s movements acknowledged the pro-life women who march for life because they believe women's rights – and human rights – begin in the womb. They don’t march specifically for women or female fetuses. They march because, from their beginning, women are persons just as much as men.