Katie Yoder
|
Posted: Dec 31, 2018 5:00 PM
Share   Tweet
The opinions expressed by columnists are their own and do not necessarily represent the views of Townhall.com. 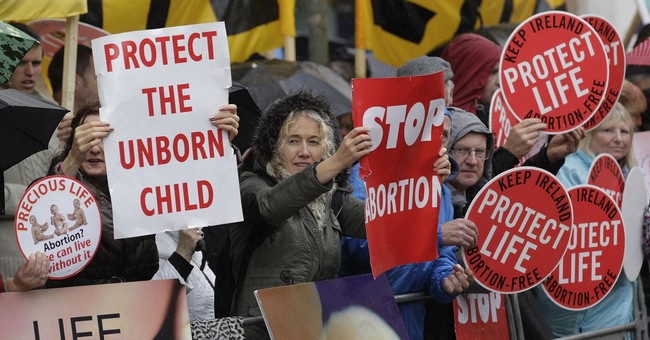 Thanks to media efforts, children are learning all about abortion just in time for the new year – from a staunch abortion supporter only too happy to regurgitate talking points to youngsters.

On Dec. 28, Kids Meet, a HiHo show run by Cut.com, released its latest episode on Facebook: “Kids Meet Someone Who's Had an Abortion.” In this case, that someone was Amelia Bonow – the cofounder of #ShoutYourAbortion, a network that encourages women share their positive abortion stories. While Bonow accused the pro-life movement of “propaganda,” she spread some of her own to kids – from calling abortion “God’s plan” to identifying as “pro-life.”

The Kids Meet show claims to foster “empathy through play” by introducing “curious kids” to “people with particular points of view.” But Bonow didn’t just give a point of view; she twisted religion and the pro-life movement to kids.

“I had an abortion,” Bonow began telling various kids, because “I got pregnant and I really didn’t want to have a baby.” She argued that her abortion wasn’t “reckless” because “mistakes happen.” And this was a mistake easily fixed.

“You go to the doctor, and they put this little straw inside of your cervix and then inside of your uterus and then they just suck the pregnancy out,” Bonow described. “And it was like a crappy dentist appointment or something. It was just like, ‘ahhhh, this is like a body thing that’s kind of uncomfortable.’”

And just like that, a life ended. Although, according to Bonow, life “begins when a person has a baby.” It doesn’t begin at conception, where an unborn baby’s unique DNA is set, or even at six weeks, when a baby’s heartbeat is detectable.

In her discussion normalizing abortion, Bonow, like many in the media, didn’t acknowledge stories from those who survived their mothers’ attempt to abort them, like Gianna Jessen and Melissa Ohden, or the stories of regret that other women share. Organizations like the Silent No More Awareness Campaign lists thousands of their testimonies.

One, from Jenna in Indiana, urged: “Please understand the horror of getting an abortion. It’s not a procedure to fix an illness; it’s to end a life. It’s not all going to go away, you will think about it for the rest of your life. It will haunt you.”

Bonow not only bypassed stories like these but also overlooked alternatives to abortion.

“Do we want people to just have all those babies? So what do we do with them?” she asked one boy who suggested certain abortion limits. When the young kid suggested adoption, she again disagreed. “I feel like if I am forced to create life, I have lost the right to my own life.”

She continued, “I should be the one to decide if my body creates a life.” Plus, if a woman chooses the adoption route, “you still like have a kid, out there, somewhere.”

She’s right: no one should be forced to create a life. The difference is that, in the pro-life movement, that choice happens before getting pregnant – not after.

The pro-life movement is centered on abortion and religion, Bonow implied. (She forgot groups like Secular Pro-Life.) She wanted to know the children’s faith while, at the same time, she didn’t reveal her own. Although, on Twitter, she once typed, “I wish I believed in God,” suggesting that she’s atheist.

She showed no qualms about using God to argue for abortion in a video with kids whose faith teaches them that abortion ends a human person’s life. She also had no problem trying to hijack the pro-life movement. That’s because pro-lifers are really “anti-choice,” and pro-choicers, like herself, are really “pro-life.”

“To me, the phrase ‘pro-life’ is propaganda because often the people that say that don’t want to take care of people who have babies they can’t afford and then are totally poor,” she said. “I’m just like ‘that’s not – you guys aren’t pro-life, I’m pro-life.’”

She failed to mention that it’s the pro-life movement that sponsors pregnancy centers, which provide pregnant women and new moms with free housing, medical supplies, clothing, and educational classes, among other support. Instead, Bonow blamed her abortion woes on “old white dudes in the government.” Nevermind that the pro-life movement is largely led by women, from Susan B. Anthony List’s President Marjorie Dannenfelser to March for Life’s President Jeanne Mancini.

But Bonow was dedicated, if nothing else. At one point, she asked a teenager if she wanted to see a tattoo. She pulled down her lower lip to reveal one inside her mouth reading, “abortion.”