Katie Kieffer
|
Posted: Sep 12, 2016 12:01 AM
Share   Tweet
The opinions expressed by columnists are their own and do not necessarily represent the views of Townhall.com. 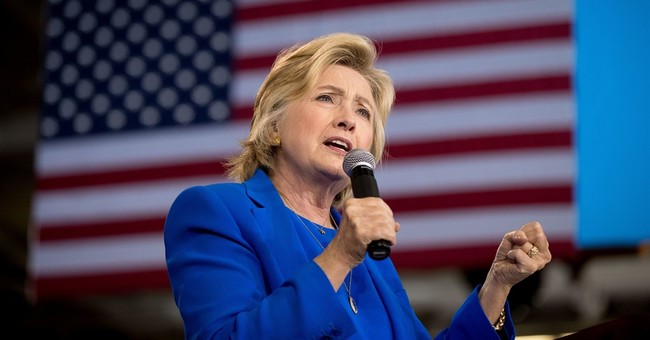 Gun grabbers are camouflaging sinister plans with slick catchphrases—hoping you’ll barely notice when they pickpocket your pistol. Hillary Clinton is quietly building a massive gun grabber army. It’s up to you to halt her momentum.

Gun grabbers “die hard” because they insist on believing the same anti-gun theories even after encountering facts disproving their theories. They also die hard because it’s nearly impossible to defeat them. Which means, we must try harder.

"Do you believe that an individual's right to bear arms is a constitutional right?" –ABC's George Stephanopoulos asks of Hillary Clinton in June of 2016

Two-letter words beginning with the letter “I” are wild cards the Clintons love to play when caught in acts of deception. Bill Clinton clung to the word “is” in the same way his wife now clings to the word “if.” (Contrary to President Obama’s 2008 claim, it is possible for Democrats to be “bitter clingers.”)

The latest gun grabber playbook includes a marketing campaign revolving around carefully chosen words and cleverly designed buildings, which I will refer to as “unsafe spaces.” Here’s what you need to know in order to pierce the deception.

“Script” is the word TIME’s latest issue uses to describe the new terms that Democratic legislators and candidates are using to peddle their pistol-snatching policies. This script is a compilation of words and phrases that political consultants and pollsters predict will convince Americans to relinquish their God-given right to self-defense.

“Gun control,” is a phrase the script advises Democrats to avoid—since most Americans oppose blatant gun-grabbing. Instead, they’re instructed to say “gun safety” or “common sense gun legislation.” The “NRA” is also a term to avoid—and replace with “gun lobby,” because many Americans associate the NRA with positive pastimes like “hunting and sport,” reports TIME.

Gun grabbers are also talking ad nauseum about “terrorists” and “mass shooters” who tote guns while ignoring the far higher number of everyday Americans who legally own firearms for hunting or self-defense. Why talk about female students who deter rape by carrying concealed on Texas college campuses when you can brew fear by fixating Americans for nearly four years on Newtown shooter Adam Lanza?

If appearance is reality, Democrats are doing a stellar job of slowly but steadily convincing voters to relinquish the right to own guns in order to be “safe” from terrorists and madmen.

I’ve said it before and I’ll say it again. No cardboard sign saying “Gun Free Zone” ever stopped a violent person from storming a gun free zone and spraying bullets.

By “second to none,” Erardi Jr. must mean “none at all,” since the primary vulnerability Sandy Hook Elementary had when Lanza stormed the school’s doors on Dec. 14, 2012 and shot 20 children and six adults remains: it’s still a gun-free zone.

Architects and government consultants are making hard cash redesigning public spaces all across the country with so-called safety measures like “panic buttons.” Minnesota’s city of Lake Forest recently made headlines by redesigning its city hall with extravagant bullet-resistant glass. The Minneapolis Star Tribune gushed over the potential of “panic buttons and bullet-resistant glass” to prevent mass shootings in Minnesota.

Common sense check: stop teaching building occupants to respond to a gun-wielding criminal with panic. No matter how fast you hit a panic button, police will take five-to-20 minutes to arrive. By then, the shooter will have killed or wounded the button-presser plus dozens, if not hundreds, more people—and vanished in a getaway vehicle.

A far better solution is to respect the right of law-abiding Americans who work in vulnerable facilities—like schools, hospitals, churches, or city halls—to carry concealed firearms.

Isn’t it interesting that Hillary Clinton wants to revitalize the failed ban on semi-automatic firearms, yet is practically silent on her political ally President Obama’s use of drones to unconstitutionally (and his administration would say inadvertently) kill up to 116 noncombatant civilians in non-war zones? Are Democrats really in a place to preach about how to stop violence when their own policies perpetuate the bloodshed of innocent lives?

Yesterday, Hillary left a 9/11 memorial event early after she “overheated.” She was rushed to daughter Chelsea’s luxurious 5,000-square-foot New York apartment to rest. Now, she’s being treated for pneumonia. In Hillary, we have a presidential candidate whose health is publicly deterring daily. Instead of dropping out of the race to address her health, she persists in seeking power so as to implement gun policies that fly in the face of common sense.