Katie Kieffer
|
Posted: Aug 30, 2016 12:01 AM
Share   Tweet
The opinions expressed by columnists are their own and do not necessarily represent the views of Townhall.com. 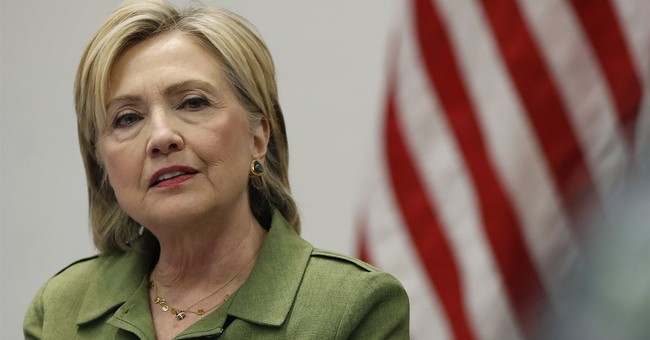 She doesn’t discriminate. No, Hillary Clinton welcomes all less fortunate Americans into her campaign—especially women, African Americans, and the poor.

Hillary is not often in a good mood and lately she is in a particularly foul mood. Why? Her opponent, Donald Trump, is engaging in straight talk with minorities, particularly African Americans:

"Look at how much African-American communities are suffering from Democratic control. To those I say the following: what do you have to lose by trying something new - like Trump? …You're living in poverty, your schools are no good, you have no jobs, 58 percent of your youth is unemployed, what the hell do you have to lose?"

Fuming at Trump’s courage to tell it like it is, Hillary fired off a response: “[Trump is] taking hate groups mainstream and helping a radical fringe.”

Hold on, Hillie. Before you throw stones, count to 10 and recall how you imbibed the philosophy of Saul Alinsky. Hillary wrote her senior thesis for Wellesley College analyzing and sympathizing with Alinsky’s model of ends justifying the means. She also was endorsed by one of Alinsky’s strongest acolytes, Barack Obama. (Another way of saying this is that Hillary, Barack and Saul would have been sorted into the House of Slytherin had they attended Hogwarts with Harry Potter.)

When Barack Obama left his first “job” as a community organizer in Chicago to pursue politics, he left the African American community he promised to help, having done “nothing that would change poverty on the South Side of Chicago.” And that’s according to an interview given to the New York Times by Obama’s friend and mentor Jerry Kellman who helped him land the community organizer position.

Saul Alinsky’s socialist and self-serving philosophies help folks like Hillary and Barack rise to political power—but do little to help those in need.

Trump is correct. I’ve fact-checked his statements for you here, detailing how Barack Obama and Hillary Clinton’s policies have and will continue to harm women, African Americans, and the poor. Single motherhood, absentee fatherhood and unemployment are at historic highs among these demographics, yet Hillary promises to continue Obama’s tried-and-failed plan to spend instead of mend.

Hillary isn’t welcoming female, black and poor Americans to follow her leadership to attain better jobs. Or to live in safer, more peaceful neighborhoods. Instead, she is inviting them to give up.

No man, no gun, no worries! has been Hillary’s motto for years. When she talks to an all-black audience as she did in on Martin Luther King Day in 2014, she claims Republicans are stifling the freedom and safety of minorities because they run Congress “like a plantation.”

Truth is, Hillary needed a man in her own rise to political power. She also needed—and still needs—guns for her safety. However, she is trying to buy votes by convincing women, blacks and the impoverished that they need her; that they must renounce traditional values and their natural right to self-defense; and that they are victims in need a nanny who masquerades as a heroine.

Since 1992, Hillary has boasted she “could have stayed home and baked cookies” and relied on husband Bill to bring home the bacon—and didn’t. She wore the pantsuit. He stained navy blue dresses.

“But Mr. Clinton has profoundly shaped her ability, as well as that of any modern Democratic nominee, to compete [for the office of presidency],” the New York Times opined in 2014.

When even your kindred spirits at the New York Times concede that you needed your husband to rise to power, you may as well own up to it.

By promoting the notion that women don’t need men, she lies about her own path to power. More disturbingly, she promotes resentment between the genders—which in turn leads to broken families. Single, impoverished mothers will be more willing to vote for Hillary, who is offering tempting goodies like “free” childcare and “free” college education than mothers with a reliable father in their child’s life.

If elected president, Hillary plans to renew her husband Bill’s tried-and-failed ban on semi-automatic weapons. Of course, she has Secret Service protection for life, so such a ban would not impact her. It would, however, disproportionately hurt poor, minorities and single mothers who live in high-crime urban areas.

Women and minorities don’t just need strong fathers. At a time when rape and mass violence is escalating on college campuses, the weakest among us also need gunpowder. Trump has proudly announced that he has a concealed carry permit and will respect the right of Americans to do the same. Hillary? Not so much.

This month, Hillary wrote a letter to teenage girls—including many first-time voters—in Teen Vogue—urging them to fight against “gun violence.”

In claiming there is such a thing as “gun violence”—she leads young girls to have an irrational fear of the most modern tool of self defense; the only tool that can most effectively level the playing field between themselves and a large male attacker. Guns are not animate objects apt to thrust themselves into the hands of madmen who proceed to rape an unarmed college student after a night class.

Earlier this year, Clinton was the keynote speaker at a fundraiser for the Trayvon Martin Foundation. You’ll recall Martin was the young black man who mounted a Hispanic man in an MMA-style “ground and pound” attack, pummeled him with his fists and then reached for the Hispanic’s gun. But, the Hispanic, George Zimmerman, reached his own firearm first and shot Martin in self-defense. By keynoting an event for Martin’s foundation, Hillary made a clear statement: she supports violence—as long as it helps her appear to support African Americans.

Don’t help Hillary turn the United States into her plantation. She won’t discriminate in her efforts to make the most vulnerable among us—women, minorities and the poor—suffer as long as she wins their votes in the process. Choose freedom. Choose Trump.