Katie Kieffer
|
Posted: Apr 04, 2016 12:01 AM
Share   Tweet
The opinions expressed by columnists are their own and do not necessarily represent the views of Townhall.com. 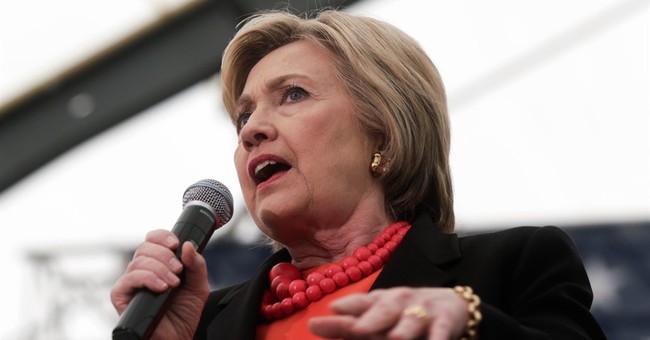 Clickety-click-click, went Hillary Clinton’s keyboard on the evening of Sept. 11, 2012 as she wrote to her daughter Chelsea:

"Two of our officers were killed in Benghazi by an Al Queda-like group: The Ambassador, whom I handpicked and a young communications officer on temporary duty w a wife and two young children. Very hard day and I fear more of the same tomorrow."

Yet, the very next morning, Clinton made remarks leading the American people to believe that an amateur online video—“inflammatory material posted on the internet”—was responsible for the attack, not al-Qaeda.

Four Americans, including Ambassador Christopher Stevens and a Millennial named Sean Smith, were killed in Benghazi due to arson and mortar attacks initiated by militants linked to al-Qaeda and Ansar al-Sharia.  Soon after the attack, we learned there wasactionable intelligence, months in advance, forewarning the State Department of severe security vulnerabilities at the Benghazi facilities.

Political research group Evolving Strategies recently showed a 30-second anti-Hillary Benghazi ad to “a randomized-controlled trial with over 1,000 respondents aged 18 to 34" (Millennials) and found that after watching this video, young people’s support for Hillary fell, but jumped five points for Donald Trump and eight points for Ted Cruz.

Millennials are turning away from Clinton as her email-Benghazi scandal unfolds. Here’s why.

“I feel like Clinton lies a lot. She changes her views for every group she speaks to. I can’t trust her,” 18-year-old Lauren Cavanaugh of Nashua, N.H. told PBS in February.

Lauren Cavanaugh’s views are very representative of her generation. A new poll finds Millennials favor Ted Cruz over Clinton or Donald Trump. And whereas Mississippi and Alabama are the only states where Bernie Sanders didn’t scoop up the Millennial vote in Democratic primaries, as WIRED puts it: “At Clinton rallies across the country… twenty-somethings… tend to be the minority.”

For over two years now, the State Department has worked around the clock to review at least 52,000 pages of documents associated with Clinton’s emails while she was Secretary of State. Among this ocean of documents—at least 2,000 emails sent over Clinton’s private and unsecure network by either by Clinton or her aides have been marked as classified.

A Freedom of Information Act case propelled the State Department to release over 45,000 pages publicly, after the State Department meticulously redacted any classified material. At least 22 such emails were determined to be “Top Secret,” the highest level of classification, and unable to released to the public.

"Everything I did was permitted. There was no law. There was no regulation. There was nothing that did not give me the full authority to decide how I was going to communicate," Clinton told CNN last summer.

Sleuthing, With a Fine Tooth Comb

Even if you don’t care about the toll on taxpayers or the frivolous waste of State Department and FBI resources to slowly submarine through the depths of Hillary’s Email Ocean and scope for secrets—you must care about how Clinton’s incompetence jeopardized our national security.

I know Millennials care. A massive 2016 study by Ipsos Public Affairs finds that national security is the number two issue of importance to Millennial voters. Only the economy weighs more heavily on their young minds.

Also, last week, Ipsos released another interesting finding: more than any generation, Millennials want to meet political candidates in person before they throw them their support. This finding is contrary to popular opinion, which says Millennials would rather text in a dark prison cell than encounter a real human being at a sunny outdoor political rally.

Young people tell Ipsos pollsters that they need to shake Hillary’s hand and hear her own words, not just read her Snaps and tweets, which they are savvy enough to know she doesn’t compose on her own. Transparency and authenticity is extremely important to Millennials.

Yes, Millennials came out in droves for Obama, who turned out to be a phony. But they’re not coming out en-masse for Hillary. Or even to “feel the Bern.”

Because, on some level, Millennials realize they already have been burned. After voting for a man who told them—in two consecutive elections—that he would create jobs; end wars; unite races; and eliminate student debt, they’re downright paranoid.

In a recent debate, moderator Jorge Ramos made Clinton listen to this clip from Patricia Smith, the mother of Benghazi victim Sean Smith: “Hillary and Obama and Panetta and Biden and Susan Rice all told me it was a video when they knew it was not the video and they said that they would call me and let me know what the outcome was.”

Did you “lie to them?” Ramos asked Clinton.

"Look, I feel a great deal of sympathy for the families of the four brave Americans that we lost at Benghazi,” Hillary answered. But, within seconds she said of Smith: “She’s wrong! ...Absolutely wrong.”

Clinton’s emails now reveal that she knew the Benghazi attack was not caused by a video yet she still told the American people that it was caused by a video. Under no circumstance would she admit her incompetence. Consequently, her Benghazi narrative sounds beyond sketchy to Millennials. It sounds cruel.

No wonder Evolving Strategies found that Millennials turned away from Clinton after watching a 30-second-ad showing Clinton screech, “What difference, at this point, does it make?!” regarding the cause of death of four Americans in Benghazi—including a member of their own generation.

Hillary Clinton. Millennials know all her emails seem to say: murder she wrote.