If Rihanna Open Carries Her Guns, So Can You 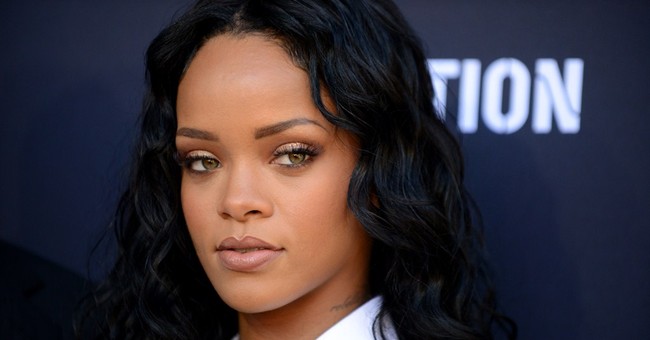 Trending
Editor's Note: This column had the wrong byline when it was originally published. Of course, the column featured below is all Ms. Kieffer's work. This was a dreadful uploading mistake, and we apologize for the error. (Matt)

Are you growing tired of seeing wealthy black Americans get by with things that cause middle class black Americans to lose their jobs or go to prison? Things like carrying firearms, flying the Confederate flag or doing drugs.

If you’re a middle class black or Hispanic cop and you use your firearm to defend yourself and your partners against a mad gunman who happens to also be black, you can lose your job (best case scenario) or be convicted of murder.

But if you’re rich and famous like Rihanna, you will be rewarded for flaunting your fetish for firearms in public. If you’re rolling in it like Rih Rih, there are zero repercussions if you leak a new fashion line called $chool Kills within days of the Charleston mass shooting (her insiders actually did this); carry a black purse in public that is shaped to look like a gun; flash your gun tattoo for the paparazzi; refer to your fans as your “Navy;” or weave weaponry and drugs into your lyrics (think her hit songs “G4L” and “Diamonds”).

Stanzas from G4L: Revenge is sweet…/Load it, reload it, and let’s go…/Guns in the air…/Gangster for life…

Stanzas from Diamonds: Palms rise to the universe/ As we moonshine and molly/ Feel the warmth, we’ll never die/ We’re like diamonds in the sky [Note: “molly” is a reference to the drug MDMA (3,4-methylenedioxymethamphetamine).]

The Council of Fashion Designers of America (CFDA) awarded Rihanna “Style Icon of 2014”—despite the fact that her fashion glamorizes drugs and guns. CFDA said Rih Rih was the perfect recipient for its prestigious award because: “of her impact on the industry as fashion’s most exciting ambassador in recent memory.”

The CFDA may as well have said: “While we would support suspending a middle class 8th grader for wearing an NRA t-shirt, we consider Rih Rih’s purses that look like or are bedazzled with firearms to be ‘fashion risks.’ Why? Because she’s rich, famous and glamorous.”

Likewise, a wealthy and renowned black rapper with an affluent and famous wife (Kim Kardashian) like Kanye West can flaunt the Confederate flag on his arm and call it “my flag.” But if a middle class black business owner in the south hangs the same flag because—to him—it broadly represents southern culture of hospitality, charm and sweet tea, he’ll be called an “Uncle Tom.” How is that fair?

Last week, Uber, a popular rideshare company, announced that it is banning its drivers and their riders from carrying guns. Basically Uber said: “Hey, drivers with concealed carry permits! If you dare to protect yourself against strangers riding in your own car with your own weapon that you’re trained and permitted to carry—you will lose your job as an Uber driver.”

It was close to midnight on April 17, 2015 when a 22-year-old madman named Everardo Custodio pulled out his gun and began spraying bullets at innocent pedestrians in Logan Square, on the northwest side of downtown Chicago.

An Uber driver with a valid concealed-carry permit fired at Custodio six times, wounding him and ending his deranged shooting spree. Despite this success story, Uber is more concerned about its public image than protecting its drivers or riders.

As comedian Bill Maher says at the end of every show, “New Rules!” As Bill Maher would not say: “If Rihanna Open Carries Her Guns, So Can You.”

New Rules: No guns (including fashion accessories that look like guns) for rich blacks until poor blacks—without Rih Rih’s expensive armed entourage of body guards—can defend themselves with their own firearms.

Rihanna has over 170 million followers across her social media networks of Twitter, Facebook, Instagram, YouTube, and Google+. In addition, she narrated the voice of Tip in the animated feature Home. Tip is a young black girl with beautiful curly hair who looks and sounds like a young Rihanna. Bottom line, Rihanna wields enormous influence over millions of young people—including those in grade school.

It’s not right that Rih Rih continues to make millions glamorizing the gangster life while everyday black Americans face job loss or a public shaming for doing similar or related but respectable actions and in a more responsible and purposeful manner.

New rules: If Rihanna can open carry, so can you.