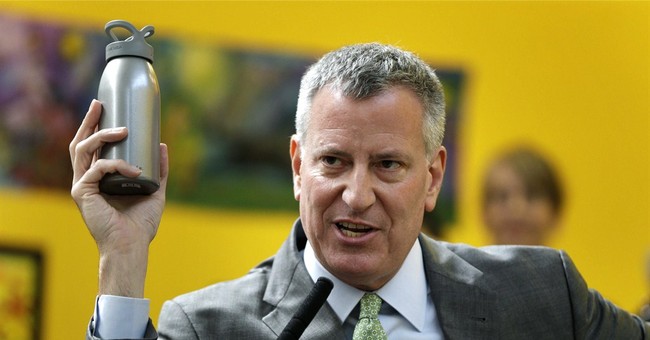 “No man, for any considerable period, can wear one face to himself, and another to the multitude, without finally getting bewildered as to which may be the true,” writes author Nathanial Hawthorne in his classic novel, “The Scarlet Letter.”

Mayor de Blasio has finally reached complete bewilderment over who he is as a politician. Is he a champion of the poor and oppressed? Or is he the oppressor? In his confusion, he has taken to metaphorically streaking in public, giving us clues to his true intentions.

Former New York Mayor Michael Bloomberg was a bit confused in his own right. He wanted to ban hunting despite mistaking a semi-automatic rifle for a fully automatic firearm. Yet despite exhibiting ignorance with regard to the 2nd Amendment, at least Bloomberg understood that the 4th Amendment allows private developers to have a choice in whether to include affordable housing units within their developments. In contrast, Mayor de Blasio wants affordable housing inclusions to be mandatory.

Extell Development Company is now leasing One Riverside Park, a 33-story tower looming along the Manhattan waterfront with fully-loaded individual units going for up to $25 million. Extell decided to include 55 low-income units within the tower. The affordable units are very reasonable for Manhattan’s Upper West Side: single bedroom units will rent for $895 a month and two-bedroom units will rent for $1,082 a month.

Extell asked the New York City Council for approval to give the affordable units—which all face 62nd Street rather than the Hudson River—their own door and address (470 West 62nd Street versus 50 Riverside Boulevard).

Never one to pass up an opportunity to rally for the little guy, de Blasio lambasted the separate entrance as a “poor door.” Meanwhile, poor people have expressed excitement and gratitude over the prospect of fleeing rat-infested studios for opulent lofts in a prime Manhattan tower that would otherwise be outside their price range. So far, over88,000 people have applied for the 55 affordable units.

De Blasio is a man who embraces condensation. He maintains that underprivileged New Yorkers are too inept to educate their own children and opposes charter schools with proven results, like Success Academy Harlem 4. However, I caught him “streaking” or revealing his true colors when he made schoolchildren trudge to class while snow fell at a rate of three inches an hour and buses careened on the road. In his mind, real parents would never have made such a “stellar” choice.

De Blasio also contends that poor people have such fragile egos that they are not capable of living in reality; they must never face the realization that they are poor; they must live in fantasyland. He also apparently believes that wealthy people must be ashamed of their wealth and never publicly admit that they are affluent.

De Blasio has tried so hard to wear two faces—guardian of the poor and champion of entrepreneurial innovation—that he has become condescending to both groups. His true colors have shown through and New Yorkers—rich and poor alike—are dismissing him as irrelevant. On behalf of the wealthy, Extell president and founder Gary Barnett told the New York Times that the poor door controversy is a “made up controversy.” Meanwhile, the city’s poor are speaking out via their applications to live at One Riverside Park, which are flowing in by the thousands. One Riverside Park now has roughly 160,000% more applicants than available affordable condo units.

Most underprivileged people will express gratitude for opportunities afforded them by capitalism. The New York Times recently interviewed a homeless San Francisco woman named Holly Leonard, who had received a free smartphone from Google. Despite San Francisco’s stark disparity between upper and lower class households, Leonard expressed more appreciation than resentment: “…I have to be happy with what I have. I just feel like a lot of these companies are helping those that are less fortunate.

Instead of using income or race to pull Americans apart, politicians should focus on lowering taxes so that every group of Americans can feel the pride and fulfillment of opportunity. When there is opportunity, Americans will build their own doors and whether that door is made of wood or gold, the door will belong to them; they will have earned the door through their own hard work and ingenuity.

Please throw on a T-shirt and shorts, Mayor de Blasio. Your secret is out. We know what your redistributive policies entail and you can no longer feign to be a champion of the poor—or the rich. You are streaking buck naked.