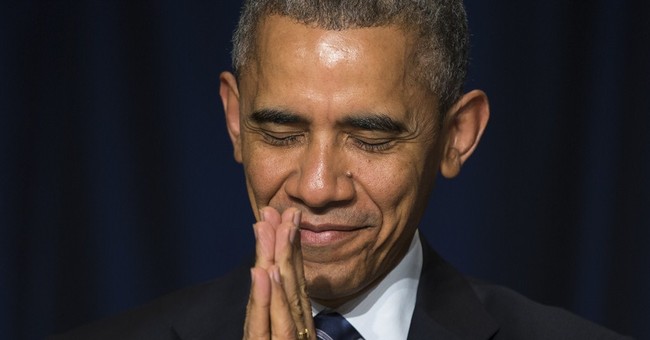 "Lest we get on our high horse and think this is unique to some other place, remember that during the Crusades and the Inquisition, people committed terrible deeds in the name of Christ."

These words from the President of the United States, during remarks at the National Prayer Breakfast, have caused an uproar in religious circles -- and rightly so -- in spite of the administration's attempts to downplay the nature of his words.

You don't have to be a longtime critic of the president to see that his deflecting attention away from modern-day evil during a rare occasion to focus on it was a missed opportunity. One that continues our cultural avoidance of tough questions about faith and reason, a public conversation that typically gets shut down -- often with threats and/or violence -- when it centers on Islam.

Besides the Crusades, President Obama mentioned slavery as something that was often justified in the name of Christ, which did a disservice to the abolitionists who were men and women of faith.

The president's words were also a slap in the face to Christians in the Middle East -- including those displaced from Iraq and Syria on account of the Islamic State's attempts to eradicate their existence in that part of the world.

People being killed for blasphemy and Christians being killed for refusing to renounce their faith is not a thing of the past, which is why the president's loaded history lesson wasn't the best use of his platform.

But President Obama's most controversial comments at the prayer breakfast weren't his most alarming. During that same speech, he said: "No grievance justifies the taking of innocent lives, or the oppression of those who are weaker or fewer in number." As the president said this and directed those listening to "Put on love," I couldn't help but hear the echoes of Mother Teresa's speech at a 1994 prayer breakfast: "Any country that accepts abortion is not teaching its people to love, but to use any violence to get what they want. This is why the greatest destroyer of love and peace is abortion."

This is why we can't see clearly. Our national conscience is too clouded, too complicit, too bogged down by false claims of love and choice and freedom.

President Obama also stressed the importance of humility, which he curiously linked to a "suspicion of government getting between us and our faiths, or trying to dictate our faiths, or elevate one faith over another."

We're a country that uses God's name in many ways, but also increasingly privatizes the practice of religion, shunts it off to the side and keeps it cordoned off from the public sphere that so needs its influence. The Hobby Lobby health care case before the Supreme Court last summer was about the Obama administration insisting that religious liberty doesn't extent to people pursuing commercial activity and providing jobs. It's a posture that religious believers have contributed to, and are now falling victim to. As the president vowed to defend religious liberty, portraying the United States as its beacon, his call to humility underlined the need for self-reflection, as his own administration continues to keep religious believers heading to court.