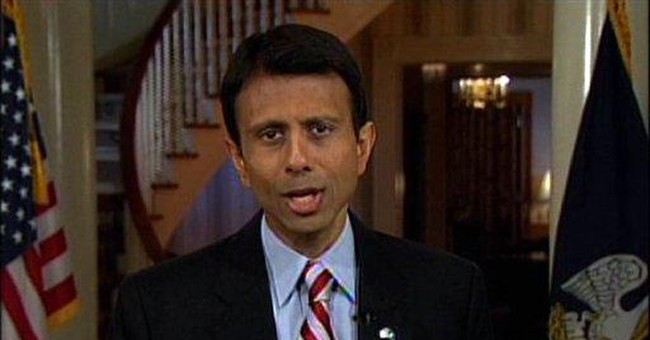 Bobby Jindal, the 37-year-old governor of Louisiana, seemed like a good choice to deliver the official Republican response to President Barack Obama's kinda' State of the Union address. Last summer, the charismatic former congressman was the much-buzzed-about great hope of the GOP, touted as a potential running mate for then-presidential candidate, Arizona Sen. John McCain. But on the eve of Mardi Gras, Jindal saw his remarks savaged by critics. And these attacks didn't just spring from the lefties at MSNBC. Some conservative pundits and regular readers of "The Corner," the water-cooler blog we produce at National Review Online, have expressed their disappointment.

It's true that the brilliant, hardworking Jindal did not bring the impassioned verbiage and lofty rhetoric that seem to have entranced the Democrats and much of the American public these days.

Jindal, who can give a good, substantive speech off the cuff, looked uncomfortable in front of a teleprompter, probably frustrated at the inadequacy of "responding" to a presidential address to Congress from the relatively modest confines of the governor's mansion in Baton Rouge. A fiend for wonky detail, he was most likely also aggravated that he didn't have time to rebut the president's arguments point by point.

What Jindal ended up doing, however, was adequately delivering a speech about American exceptionalism and fiscal conservatism. However imperfect, it was, in many ways, a speech that should have been celebrated. At a time when the country's corporations evince an overwhelming sense of entitlement to which Washington has been only too generous in catering, the doughty Louisianan stood on principle, calling for a return to the great American bedrock: hard work, self-sufficiency and the willingness to debate. Jindal's underwhelming enunciation of some fundamental principles came but days after the chattering classes on the Internet, talk radio and even in the White House went wild over CNBC's Rick Santelli. The talking head had a furious "Network" moment on the floor of the Chicago stock exchange one mid-February morning, raging against the irresponsible bailout culture that's infected a nation founded on self-reliance.

Santelli's frustration resonated. Mere seconds after I posted the video of the scene on NRO's Web site, I started receiving "Santelli for President" e-mails from readers. Hours later, noticing the exponentially increasing enthusiasm for Santelli and his message, I had a moment of deja vu. It took me back to just after Labor Day of last year. I was in the Twin Cities, yards away from Alaska Gov. Sarah Palin as she delivered her vice-presidential acceptance speech at the Republican Convention. E-mails immediately began rolling in from people who said they wanted the ticket reversed -- they liked something they saw and heard in her.

Even though most of us don't watch CNBC and few of us knew much about the governor of Alaska before she stepped out onto the national stage, the enthusiasm with which many Americans responded to Palin and Santelli was similar, and it originated in a desire for leadership. In Santelli's case, people responded to his anger and common sense. In Palin's case, they reacted to her passion and folksiness. Passion, of course, can only get you so far. And, frankly, the same goes for competence and smarts. Man cannot get elected on capability and intelligence alone. Just ask Mitt Romney. As the country edged toward the brink of financial meltdown during last year's Republican primary, there was something about the fiscally-savvy former governor of Massachusetts that did not compute with voters. Like Jindal facing an unfair playing field after the president's speech, Romney had some disadvantages not of his making that he just couldn't overcome. But as with Jindal that night, there was something people needed to hear that Romney could not manage to convey.

Jindal has a long, bright political future ahead of him. Right now, he ought to focus his energy on rebuilding and reforming the disaster- and corruption-riddled state that he so loves. And he should fight his battles as he faces them -- making clear, as he did on "Meet the Press" recently, that he'll reject federal money if the funds won't benefit residents of his state, and refusing to take part in the creation of new, unsustainable bureaucratic entities. When he does that, and does it in his element, he sings. And it's a song -- of responsibility and principle and common sense -- that we thrill to hear.