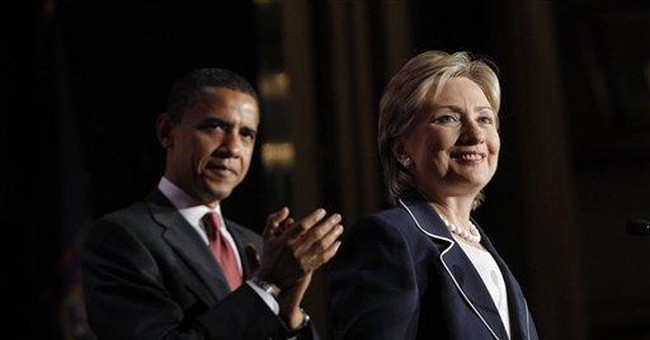 Sixty-five percent. That's Pennsylvania Sen. Robert Casey Jr.'s rating with NARAL Pro-Choice America, the standard measure for a politician's abortion-rights-advocacy purity. Sixty-five percent -- voting with NARAL two out of three times -- does not a pro-life Democrat make. And yet, when the Dems announced that Casey would be speaking at their convention in Denver, it was widely accepted that he could be described as a pro-life presence there. But one indicator of Casey's false colors -- besides his voting record -- that shows his comfortable alignment with the same old pro-abortion puppet masters dominating the Democratic Party could be discerned in the absence of outcry from groups like NARAL (formerly known as the National Abortion Rights Action League).

This lack of protest is telling. In 1992, the party refused Casey's father, former Pennsylvania Gov. Robert Casey Sr., the right to speak at that year's convention, owing, it was alleged, to his staunch pro-life position. Allowing his son to speak is meant to be a signal that times have changed, that although the Democratic leadership has not altered its stance toward abortion, it has shifted toward compromise. Too bad it's all bunk. Democrats, you see, are open to other views on the issue as long as they're only talking about cosmetic, not meaningful, changes.

Sen. Casey, you see, besides just not being an authentic pro-life leader, is also no Rick Santorum, the senator he beat two Novembers ago. Santorum went out of his way to speak about the right to life, shaping bills to protect unborn babies (and even cosponsoring legislation with his pro-choice Pennsylvania colleague, Arlen Specter, to support alternatives to embryo-destroying stem-cell research). Casey may occasionally vote alongside those who oppose abortion, but he is no leader and poses no threat to the abortion industry.

But he is just pro-life enough to serve the purposes of the Democratic Party, a desperate crew when it comes to the abortion issue this year. Their presumptive nominee stands as the most virulent pro-choice candidate ever to run for president of the United States. He wants abortion legal, he's told us during the course of the campaign, because if one of his daughter's made a "mistake," he wouldn't want them to be "punished" with a baby. (Life is never a punishment, and there are other options besides abortion. Why should an innocent be killed because of a mistake?)

Barack Obama has the ability to unite pro-lifers and pro-choicers alike against him when more voters realize that he not only supports all legal abortion, but that, while a state senator in Illinois, he opposed a bill protecting children who are delivered alive during botched abortion attempts. In Obama's mind, an unwanted, premature newborn and a normal 9-month-old should not be afforded the same legal rights. That's radical. That is infanticide. And that's a problem for Democrats.

Democrats aren't helped at all by the likes of feminist Linda Hirshman, who has argued that Democrats should really embrace abortion as a moral good. If they listen to her they are crazy, but they should send her roses for making someone sound more out there then their candidate. Democrats are helped, too, by religious leaders, writers and pro-lifers who are cheap dates. The left-wing Rev. Jim Wallis aided and abetted the scam when he called the Dems' platform language "a real step forward."

Doug Kmiec, who used to be dean of Catholic University's law school and an adviser to Mitt Romney, called it a "historic moment that does a lot for Democrats, Catholics and women." Hold on a second. It's an historic moment for Catholics and women that the party will announce that it "strongly an unequivocally supports Roe v. Wade and a woman's right to choose a safe and legal abortion, regardless of ability to pay, and we oppose any and all efforts to weaken or undermine that right"?

Last time I checked, the Catholic Church opposed abortion; the Vatican and responsible bishops, who take up their rod and their staff and teach, have clearly guided Catholics away from voting for a candidate who adopts such a platform. Catholics like myself are apparently supposed to rejoice that the Democrats threw in some language about postnatal health care and parenting support?

I'm not a party gal. If a Democrat were opposed to abortion, comprehended the threats our country faces understood the failures of big government social-welfare programs, I'd be into him. But this Democratic Party isn't into independent thinkers. Just ask former Democratic vice presidential nominee Joe Lieberman, now a former Democrat, cast aside as a pariah because he dared to support the war in Iraq.

Democrats are going to continue to say what they think Catholics and pro-lifers want to hear on abortion, to the extent they can without the abortion industry pulling the plug. Don't let them abort the facts. Don't be a cheap date. Never accept less than 100 percent.